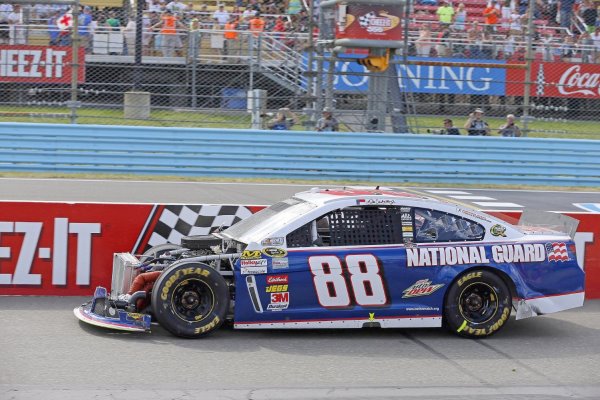 Dale Earnhardt Jr. thought Matt Kenseth was trying to retaliate against Marcos Ambrose when he triggered a violent accident with eight laps remaining in the Sprint Cup race Sunday at Watkins Glen International.

But Kenseth said no retaliation was meant, he just lost control of his car since he’s a “weak link" when it comes to road-course racing. Whatever the reason, Earnhardt slammed into Hendrick Motorsports teammate Kasey Kahne after Kahne got spun by Kenseth, ending the day for Kahne and sending Earnhardt to the garage for five laps.

“It looked like the 20 (of Kenseth) was upset with the 9 (of Ambrose) and was trying to show him his displeasure and Kasey was just a victim of all that," Earnhardt said after his 30th-place finish.

“I was behind it all but I just thought the 9 made the 20 mad. … It happens. Nothing illegal about it. He didn’t like the way the 9 was racing him and it just kind of got ugly at the top of the hill."

Kenseth said he there was no retaliation intended.

“It probably looked like that," Kenseth said. “I was trying to carry my momentum so I didn’t have four more cars pass me, and I just lost control of my car and went across and I guess somebody was outside of me.

“I guess it was Kasey. That part was my fault."

Kenseth said he ran too wide coming out of Turn 1 and then was three-wide on top of the hill and wasn’t sure exactly where he could blend back in.

Kahne, whose win last week at Pocono gave him two wins this year to make the 34th-place finish a little less painful, was surprised when he got turned.

“I was trying to just get through there," Kahne said. “There were some openings there. I’m not sure what happened. I know I got hit in the left rear.

“I know (Ambrose) was there and (Kenseth). I don’t know how it all happened. … I felt like I was kind of over on my side of the road."

Earnhardt said he had nowhere to go, chose a lane and plowed into Kahne.

“I probably could have lifted and waited on the 5 and see where he was going to go but I went where there wasn’t a car and he was in the throttle real hard and just kind of John Force’d it (like a drag racer) across the racetrack in front of us," Earnhardt said.

Comfortably in the Chase for the Sprint Cup at sixth in the standings, Earnhardt wasn’t too upset at what he considered the nature of a late road-course restart.

“I knew (when we) get a late caution like that, man, you’re just drawing a pill in the lottery to make it through the rest of the race at that point," Earnhardt said.

“So I’m not too upset … because it was going to happen to somebody."

Earnhardt was on his way to a finish likely between 10th and 15th.

“We had a good car," Earnhardt said. “I was surprised we were running as good as we did. We did not run any better position-wise, but normally we’re in the damn way.

“And today we were kind of making moves, passing guys and working hard around everybody." Sporting News