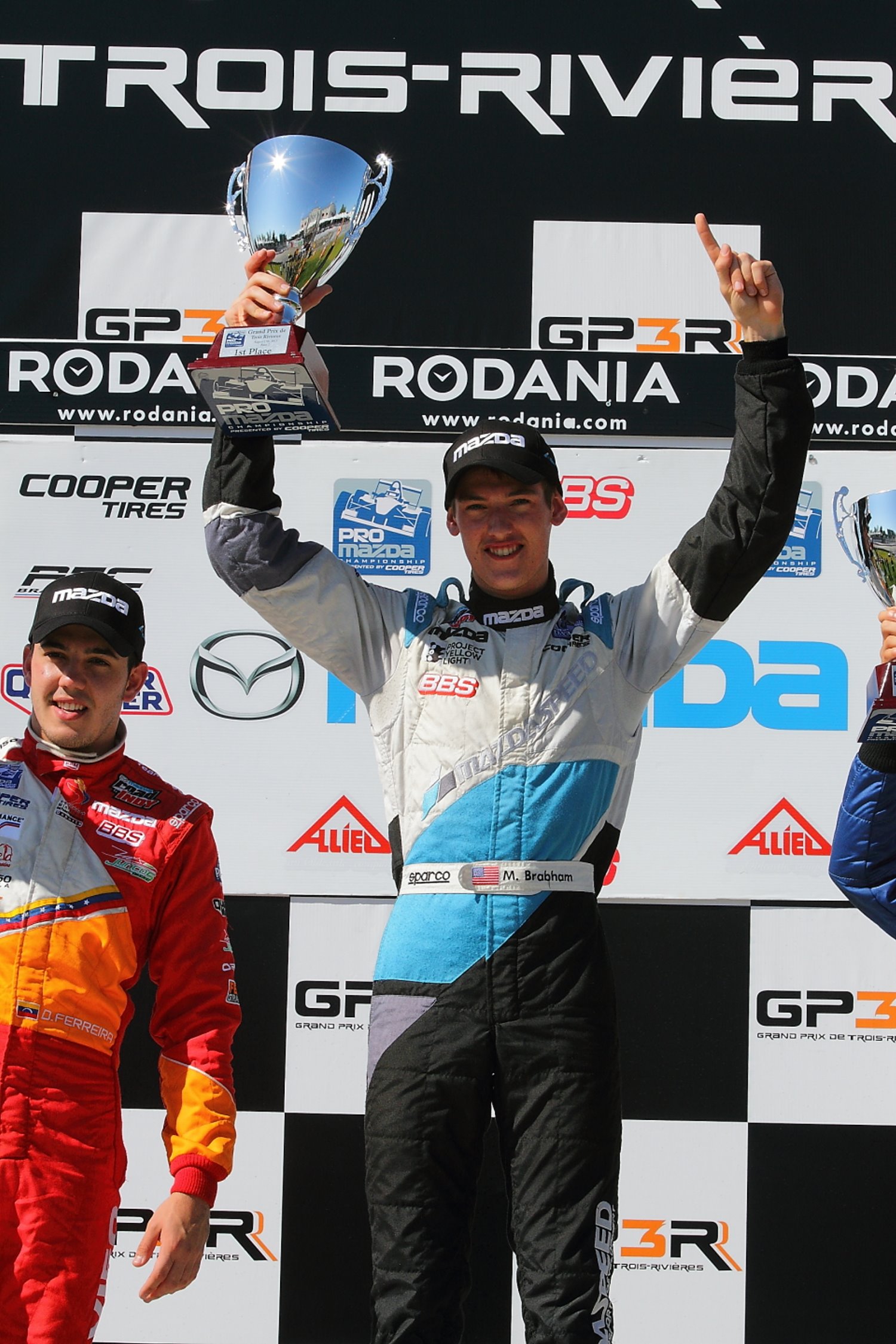 With his commanding performance in the Grand Prix of Trois-Rivieres doubleheader this weekend, Matthew Brabham of Andretti Autosport has clinched the Pro Mazda Championship Presented by Cooper Tires title with two races still remaining. His season has sent record books flying. Brabham’s 11th win aboard the #83 MAZDASPEED entry more than bested the record he recently broke of nine race wins in a season set by Jack Hawksworth last year.

The grandson of three-time Formula 1 World Champion Sir Jack Brabham and son of Le Mans 24 Hours winner and two-time IMSA champion Geoff Brabham has definitely upheld the family pedigree. Brabham is the first driver to advance to the Indy Lights series after winning USF2000 and Pro Mazda titles in succession.

As Pro Mazda champion, Brabham will earn a scholarship package from Mazda to advance to the Firestone Indy Lights Series next season – the third and final step on the highly regarded Mazda Road to Indy ladder system which provides a clear and scholarship-supported path for drivers to reach the IZOD IndyCar Series and the Indianapolis 500.

Andretti Autosport also put a lock on the team championship ahead of the season-finale in Houston – their first championship in Pro Mazda and the former Star Mazda series.

Brabham made another perfect launch from the standing start for today’s 40-lap event and remained unchallenged to take the checkered flag 5.5 seconds ahead of Juncos Racing’s Diego Ferreira. Ferreira posted another flawless drive to second – his 11th podium of the season. JDC MotorSports’ Juan Piedrahita lost a position to Team Pelfrey’s Spencer Pigot at the start, but regained third place on Lap 26 to earn his second podium of the weekend and fourth of the season.

Pigot had his hands full after falling to fourth from a hard charging Scott Anderson of Juncos Racing, who managed to displace Pigot to fifth position on the final lap.

The only caution of the race came on Lap 1 with a four-car incident in Turn Six that eliminated Shelby Blackstock of Andretti Autosport, Stefan Rzadzinski of Team Pelfrey and Kyle Kaiser of World Speed Motorsports. Lloyd Read was also involved but was able to continue after repairs by the JDC MotorSports crew.

In the Expert Class, Bobby Eberle of World Speed Motorsports claimed his second win of the weekend after a lively battle with Jay Horak of M1 Racing, who secured the class title this weekend.

Contingency awards included the Quarter Master Hard Charger Award which went to Julia Ballario of Juncos Racing for a gain of four positions to seventh place in her fourth start with the team. Ballario also was awarded the Staubli Award. The PFC Award went to the winning team of Andretti Autosport.

Matthew Brabham, #83 MAZDASPEED/Team Andretti Autosport (Andretti Autosport) – First: “I am absolutely speechless. To get two wins and the championship makes this just an unbelievable weekend, and I couldn’t think of a better place to win the championship. It has been so much fun here in Trois-RiviÃ¨res. I can’t thank everyone who supported me enough – Mazda, for giving me the opportunity to have this wonderful year, Cooper Tires and AFS Racing for coming in at the end. Andretti Autosport has been fantastic all year, so a big thanks to them. At the start of the season, I couldn’t have predicted that I would have a year like this. I am just so, so happy.

“The race was perfect for me. It went according to plan, which was to stay out front and not think about the championship. I made a good start again and managed to pull a gap. There were a few crashes I had to dodge when everyone was in the wall at Turn Six. I had a good restart and managed to keep the lead. The car was pretty much perfect the whole race. I didn’t have to push and hustle the car too much; it was pretty much on rails. Everyone at Andretti did an awesome job this weekend."

Diego Ferreira, #57 Team Viso Venezuela/Mindeporte (Juncos Racing) – Second: “First I have to say congratulations to Matthew for an awesome year. They were really, really strong all season. The weekend was good with two second places, and we are still second in the championship. I did my best to push hard this weekend but Matthew was really strong. I have to thank my team. They worked really hard."

Juan Piedrahita, #9 Petrosur/Sisolec/GFK Motors/Red Line Oil (JDC MotorSports) – Third: “Congratulations to Matthew on the championship. We had a really good weekend. It has been a hard year; we just didn’t have luck on our side but we still had the speed. The team did a great job and I want to thank them. Today we had a really fast car. I lost a lot of time trying to get by Spencer [Pigot], but I think we had more and maybe could have fought with Diego. I am just happy to be on the podium again, and I will look forward to pushing for a win at Houston."

Bobby Eberle, #13 GOPUSA.com/MSR Houston/Method Evolution (World Speed Motorsports) – First (Expert): “Congratulations to Matthew and all the guys on a great race. I want to thank the series. Last week was my first week in the series, I want to thank Mazda, Cooper Tires and everyone for being so helpful and also my team, World Speed Motorsports. It was a great weekend. I had to best my competition twice in the same race. I got behind with the contact at Turn Six and I was the last car to not have damage and then I put it in the tires, but with no damage, so I had to come back. It was exciting and the best race I have ever driven so I am looking forward to more."