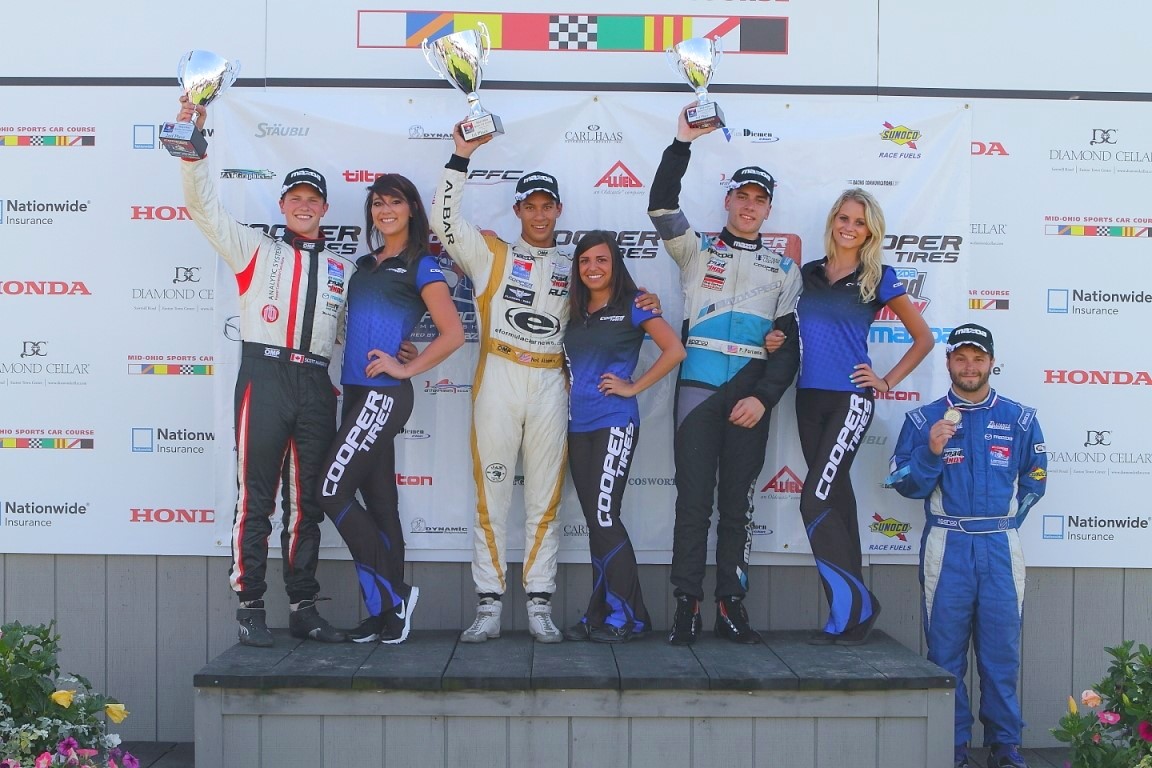 Neil Alberico has had his share of disappointments this season, failing to finish in three of the first four races, but since then the 20-year-old from Los Gatos, Calif., has been on a tear. Two victories today – one on a diabolically wet track this morning and one in warm, dry, sunny conditions this afternoon – have vaulted the Cape Motorsports with Wayne Taylor Racing contender to second place in the Cooper Tires USF2000 Championship Powered by Mazda with five races remaining.

This morning’s race, which was run primarily behind the Pace Car due to a series of on-track incidents, saw Alberico leading for most of the distance, although he did have a slice of good fortune in the late stages. Teammate and championship leader Scott Hargrove executed a magnificent outside-line pass on Alberico in Turn One at a restart on Lap 13. At the very next corner, Danilo Estrela, who had been running third for Belardi Auto Racing, also dived past Alberico on the outside line going into the Keyhole. Hargrove glanced in his mirrors an instant before turning in to the right-hand corner, only to see the No. 11 car slithering out of control directly toward him. Hargrove wisely drove straight on through the gravel trap to avoid the contact. The good news is that he was able to continue without any significant damage. The bad news is that he fell all the way to 17th before he could extricate himself from the gravel trap. Alberico, meanwhile, was long gone in the lead.

Other fine drives were posted by 16-year-old Frenchman Florian Latorre (JAY Motorsports), who climbed from 14th to fourth, and Michael Epps (Belardi Auto Racing), from Hemel Hempstead, England, who used his extensive wet weather experience to rise all the way from 17th on the grid to a career-best fifth and claim the Tilton Hard Charger Award.

Weather conditions for this afternoon’s ninth round of the USF2000 series could hardly have been more dissimilar. It made little difference to Alberico, who once again started on the pole and took off into the lead. Garett Grist (Andretti Autosport), who started second, and Hargrove exchanged places a couple of times on the opening lap before Grist asserted himself in second position.

The 18-year-old from Grimsby, Ont., Canada, also had been running second this morning – and set the fastest lap of the race – until a broken drive-train forced him out of contention. He once again claimed the bonus championship point for fastest lap this afternoon, but had to be content with a fifth-place finish after running wide onto the grass at the Carousel turn on Lap 15 and relinquishing his runner-up position.

Hargrove gratefully accepted the gift to regain second place and maintain a 22-point championship lead over Alberico going into tomorrow’s third race of the weekend which will commence at 9:10 am.

Peter Portante (Belardi Auto Racing) drove a fine race to climb from eighth to third this afternoon ahead of Enerson and a fast-closing but ultimately frustrated Grist.

Latorre once again made up for a poor qualifying position by rising from 15th to seventh to secure the Tilton Hard Charger Award.

Neil Alberico, #2 Racelite Protection/Bondurant School/eFormulaCarNews.com/J&M Trophy (Cape Motorsports with Wayne Taylor Racing) – First: “The track was obviously a lot faster being dry. The Capes predicted the track perfectly again. Thanks to those guys. They are the backbone of this team. They make our job a lot easier. Two wins in one day is awesome. We still have one more to work on to try to get the win tomorrow morning."

Scott Hargrove, #38 Analytic Systems/Race Energy/Metal Action/Skip Barber Racing/Bell Racing (Cape Motorsports with Wayne Taylor Racing) – Second: “This morning was quite a difficult race to get over and forget, but I did just that. I had a good start and was battling Garett Grist for the second. It didn’t quite work out as he got back around me but I just settled in from that point on. The car was great after the repairs the team had to make and I can’t thank Cape Motorsports enough."

Peter Portante, #41 Mazda/California Scents/Intercity Lines/Beurre &Sel/B&R Electrical Contractors/Randy’s Wooster Street Pizza/Northern Construction/Velez Computer Systems (Belardi Auto Racing) – Third: “It was a really great start. I think we were going three wide into Turn Four. I just really had a great result there and came out clean. I had a little wheel-to-wheel action with a few people, just running hard. We had a great setup. We changed it up a little bit from qualifying and it helped us out a lot. I maybe lost a little bit at the end chasing Scott, but I am really happy with the result. This is our second podium this season, and I am looking forward to trying to get a better result tomorrow."

Scott Rettich, #71 PDI Communication Systems/Springboro Car Wash (Alliance Autosport) – First (National Class): – “The race was certainly much more enjoyable in the dry than this morning. It was definitely much easier to run a good pace in the dry than in the wet. A win is great and it feels even better when it’s my home track."

Neil Alberico, #2 Racelite Protection/Bondurant School/eFormulaCarNews.com/J&M Trophy (Cape Motorsports with Wayne Taylor Racing) – First: “We had a rough beginning to the season and it has taken awhile to get back to where we were but it is definitely starting out to be a great points-scoring weekend. A win is a win and we need to keep moving forward; we still have half a season to go. The Cape Motorsports guys made a great call with the car given the conditions were super, super tough so they deserve a lot of credit. Both Danilo [Estrela] and Scott [Hargrove] were definitely fast. They both had a great restart on the last one and Scott was able to get around me but those two got together and, fortunately for me, I made out. It’s good to be on top and congratulations to these two guys for being on the podium."

RC Enerson, #10 Team E/Patriot Bank (ZSports Midwest with Team E Racing) – Second: “It’s feels really good to be here. In Toronto, we were pushing hard to get up there with the top pack and we finally got there today. With the treacherous conditions, I was trying to keep it up at the front and not go off the track. I was just looking ahead to see where everyone was positioning themselves and to see if I could learn a few things as well. A podium feels great."

Jason Wolfe, #23 Pabst Racing/Wolfe Trucking, Inc. (Pabst Racing Services) – Third: “It’s been awhile but I am finally back on the podium. I started back in 12th and had a really good start. I passed probably three or four cars and then everyone starting spinning off so I was handed some positions but I’ll take it at the end of the day. I have a lot of pressure at this race [his home race] and it feels really good to get a podium here."

Scott Rettich, #71 PDI Communication Systems/Springboro Car Wash (Alliance Autosport) – First (National Class): – “I love racing at Mid-Ohio. I come here multiple times a year in different cars and it just feels really good to come away with a win on such a big race weekend. Mid-Ohio is always extremely difficult to run in the rain, lots of slick patches, and no matter what you do you have to cross them at some point. Even knowing the rain line here, it really doesn’t help you a lot. It’s so difficult to carry good speed and put the power down."