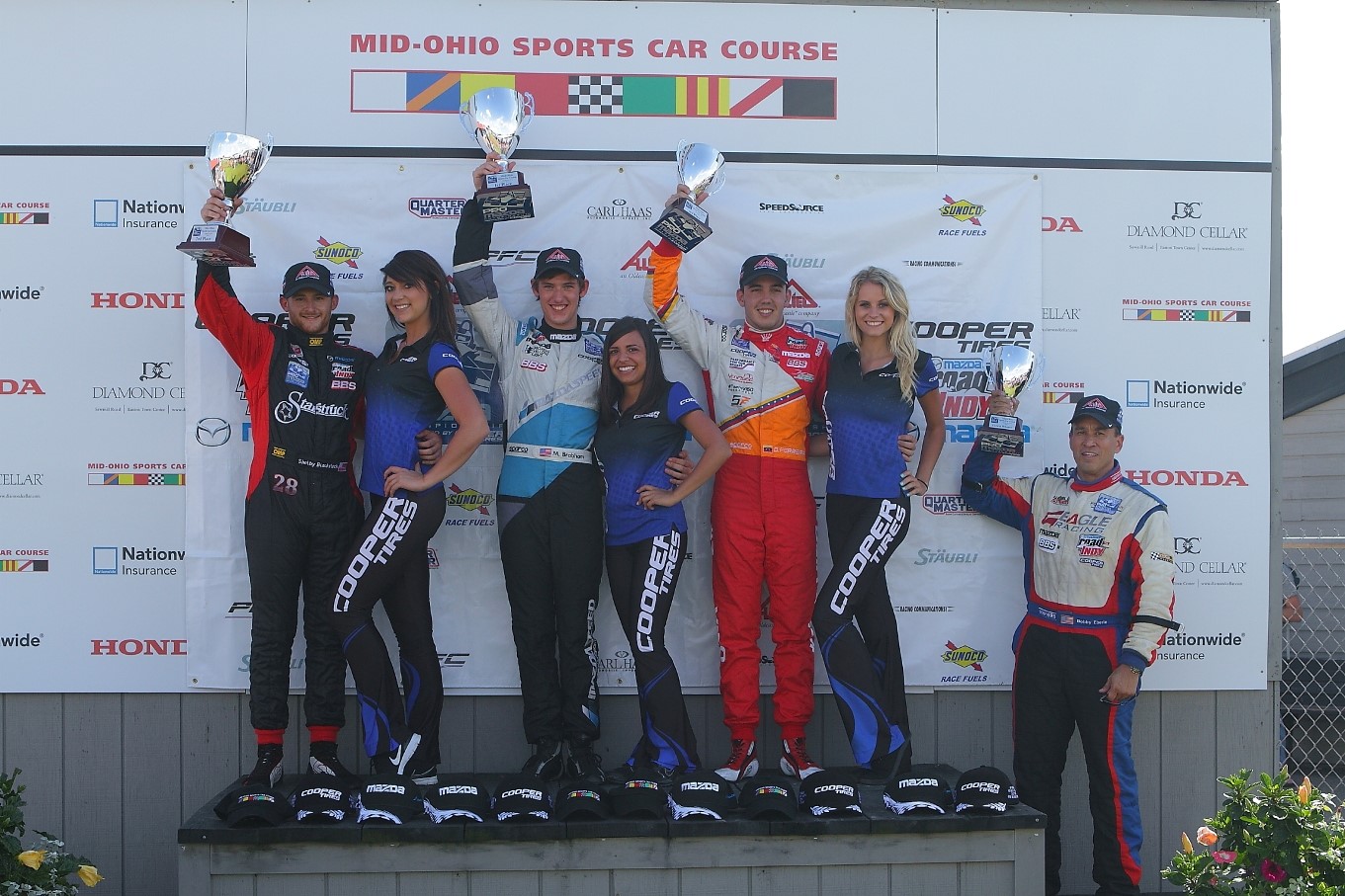 Matthew Brabham bounced back from a disappointing weekend at Canadian Tire Motorsport Park two weeks ago by scoring a convincing victory today in the first leg of the Allied Building Products Grand Prix of Mid-Ohio.

The third-generation racer from Boca Raton, Fla., qualified on the pole for the fifth time in 11 rounds of the Pro Mazda Championship Presented by Cooper Tires. He then led throughout the 20-lap race to claim his eighth win of the year and equal the record for wins in a single season established by last year’s champion Jack Hawksworth.

Brabham’s progress was interrupted by a couple of full-course cautions but his concentration suffered not one iota as he extended his advantage to 3.890 seconds at the checkered flag.

Three weeks after scoring his first-ever victory, Andretti Autosport teammate Shelby Blackstock maintained his strong form by finishing second. Blackstock, from Nashville, Tenn., had his hands full in the closing stages as Diego Ferreira (Juncos Racing), from Maracay, Venezuela, had fought off the advances of Spencer Pigot (Team Pelfrey) and was charging along in third. Blackstock took the position by a mere 0.242s, with Pigot, from Orlando, Fla., also close behind in fourth.

Contingency awards included the Quarter Master Hard Charger Award to Pigot for a gain of seven positions, the Staubli Award to Kaiser and the PFC Award to the winning team of Andretti Autosport.

Race 2 of the Allied Building Products Grand Prix of Mid-Ohio will be green at 10:05 am tomorrow.

Matthew Brabham, #83 MAZDASPEED/Team Andretti Autosport (Andretti Autosport) – First: “Canada was definitely a tough weekend for us and it is always good to bounce back and we did that in this race. I am really pleased for the team. It has been a great weekend for us. We were fast straight out of the box. We had to put the car back together after that last race [at Canadian Tire Motorsport Park] and we had no issues with the car or anything like that. The team has been working so hard all year and I can’t thank them enough. I am happy to have the one-two with Shelby and to win the race. It was definitely tough out there. It was really hot and it’s a physical track, but it is a lot of fun to drive. Hopefully, we can fight for the win again tomorrow."

Shelby Blackstock, #28 Team Starstruck (Andretti Autosport) – Second: “Unfortunately, we had to accept second place. We had a really good jump at the start and I actually had a really good run on Matt. There was an opportunity there but I didn’t want to come back and explain to Michael [Andretti] how I took both of us out. I let that one slide and settled into a pace. Diego was full on the gas, which made it a little bit difficult at the end. Once I was down the straightaway I said okay, we’re good this lap and then I messed up in [Turn] Nine and almost gave him an opportunity. It was a good day overall but, hopefully, we’ll go for the win tomorrow."

Diego Ferreira, #57 Team Viso Venezuela/Mindeporte (Juncos Racing) – Third: “This was our eighth podium of the season and I am really happy to be on the podium again. We had a bad qualifying in the rain and came fifth, so it is always good to get a podium. It was a good race. At the beginning, I was fighting with Spencer [Pigot] and with my teammate [Scott Anderson] and, on the last lap, with Shelby. My car was really good and I want to fight for the lead tomorrow."

Bobby Eberle, #13 GOPUSA.com/MSR Houston/Method Evolution (World Speed Motorsports) – First Expert: “It was a great day. Earlier today in watching some of the cars in practice in Turn One, I noticed – at least to me – some of the cars moving mid-corner and that’s what got me. Walt [Bowlin] was tracking me down on the restarts, which certainly didn’t help, but I held on the rest of the track. For my first pro race, it was a great experience. I have been to this track once before so it wasn’t totally new but the experience is what takes awhile to sink in and get used to. It was a good day."