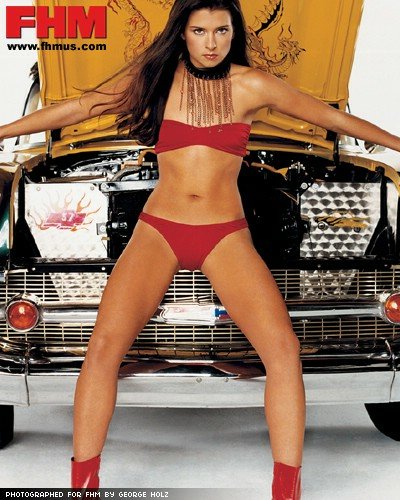 “Read it yes. I just think that it’s funny how he said that I could qualify, but I can’t race because those of you that actually watch what I do would know that I can’t qualify for crap. In the race things go much better. It’s a little bit funny, but the most important thing to me is that I can keep my team happy, we’re moving in the right direction, that Go Daddy is happy and that when you walk out of the garage or walk around the track and meet a little girl that wants to grow up to be like you then you’re doing something right — those are the things that feel right."

DOES IT MATTER WHAT ANYONE SAYS ABOUT YOU AND DOES IT MOTIVATE YOU IF PEOPLE TALK NEGATIVE ABOUT YOU?

“Thanks Kyle (Petty) thanks for motivating me. I really don’t care, I don’t, it’s true that there are plenty of people who say really bad things about me, I hear about them or I read about them or read them on Twitter. People want me to die. At the end of the day, you just get over that kind of stuff and all you can do is trust that you’re doing a good job and that’s all that matters and the people around you believe in you."

WHERE ARE YOU ON THE LEARNING CURVE AND HOW MUCH BETTER DO YOU EXPECT TO BE?

“This is my second full year in NASCAR and it’s in the Cup Series so it’s definitely jumping in the deep end on some level. I’m grateful that I was recommended to do Nationwide before Cup, I think that was a good idea. You talk about the curve and the curve is different for everybody. I think at times on some level I think I am ahead of it and at times I feel like I am behind it. And that is just because the curve is different for everybody and I don’t know at what time it flattens out and you are where you are, but it’s not yet. I know from my perspective that I feel like I am feeling the car better and I think that over time being able to feel the car better is going to result in a car that is set up for me and will allow me to driver harder and faster and to be better. So that what I am learning now, the feelings about the car. Shoot if I got tight off the corner last year, or any other time I drove the car, I would have said it was just ‘tight off’. I would have had no idea the splitter was coming up. Now it just seems simple and straightforward to me. These are the things you learn over time and there is no se amount of time that you get to flatten that curve out, but it will someday. I have no idea when."

WHAT IS IT THAT YOU HAVE TO DO TO SILENCE THE NAYSAYERS?

06/27/13 Part III of Matt Clark’s sit down with NASCAR on FOX/SPEED analyst Kyle Petty was a candid one.

Petty, a regular analyst for NASCAR RaceDay, was quite open with his thoughts on NASCAR Sprint Cup Series star Danica Patrick, his father ‘The King’ Richard Petty’s ownership abilities and how the NASCAR Hall of Fame voting process is playing out.

Clark’s interview segments, which are known as Mattie’s Diner, can be seen weekly on FOX Sports SPEED’s NASCAR Race Hub. Here is what Petty had to say:

Petty: Yeah, she’s hot. She’s a hot commodity and rightfully so. In a market where everybody that crawls into a race car on a Sunday afternoon in Cup racing is male; she’s the female. I don’t have a problem with her being a marketing machine – more power to her.

Clark: Where’s she at as a driver?

Petty: That’s where I have a problem. Where fans have bought into the hype of the marketing, to think she’s a race car driver. She can go fast, and I’ve seen her go fast. She drives the wheels off it when she goes fast.

Clark: …but has she learned to race?

Petty: Because I think it’s too late to learn.

Clark: Then what makes a difference between a good driver, and a great driver?

Petty: If I knew, I’d be a great driver. I was not a great driver, and I’ll be the first to admit it. I was a journeyman driver. Just like in the NFL or any sport, there are journeyman players…

Clark: …but a lot of the time, the good players make the best coaches and analysts.

Clark: Guys that are great make it natural.

Petty: I don’t think great drivers make good owners. I don’t think, you know, ‘The King,’ is not the best owner in the world. Cale Yarborough wasn’t… Darrell (Waltrip) wasn’t…

Petty: …because they think it comes so easy to them. They think everyone can do what they did. They don’t see that they were that special.

Clark: What makes a Hall of Famer?

Petty: Well, when you sit in that room when they vote – not much, anymore, to be honest with you.