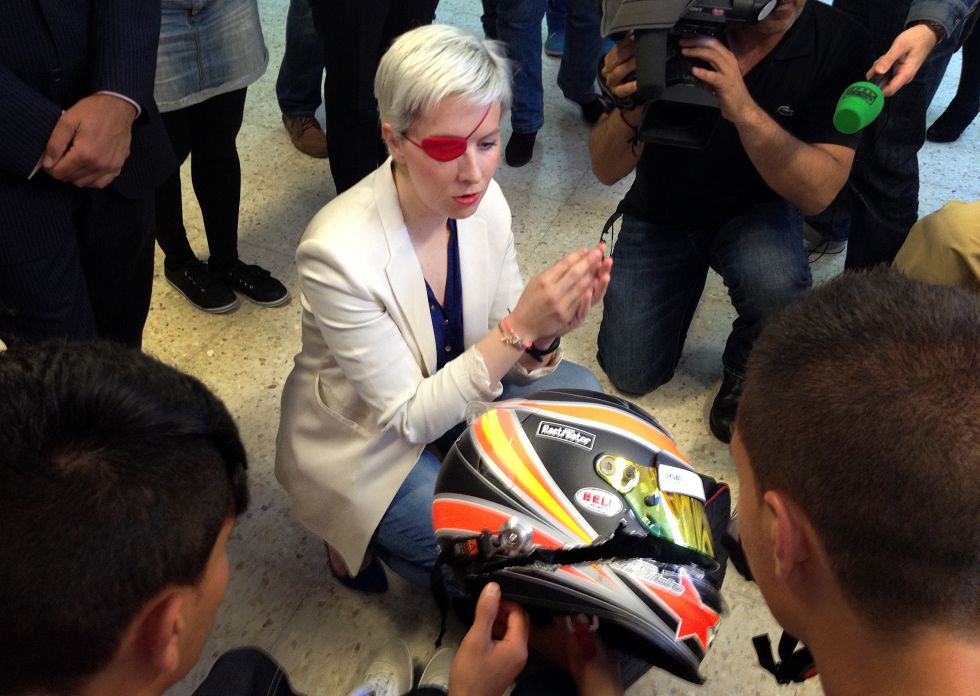 Red Bull, whose team boss is Horner, joined Ferrari in filing an official protest when it emerged recently at Monaco that Mercedes had used its 2013 car for Pirelli tire testing at Barcelona after May's Spanish grand prix.

But the FIA is also investigating an earlier test, after Bahrain, in which Ferrari test driver Pedro de la Rosa tested tires for Pirelli at Barcelona at the wheel of a client-owned 2011 F1 car.

Ferrari has dismissed that test as "irrelevant", insisting the only rule breach was committed by Mercedes, because the German team used its current car and race drivers.

"Ferrari's position is different," he told Italy's Autosprint magazine, "because even though they used an official driver (de la Rosa), it wasn't their 2013 car.

"The two situations (Mercedes and Ferrari) are not even comparable."

Asked what he expects from the FIA's investigation, Briton Horner answered: "That the matter is analyzed quickly and fairly."

Both Mercedes and Pirelli have hit back strongly at claims the Barcelona test was conducted in 'secret', but Horner insists it obviously was.

"You have that sort of approach when you don't want someone to know something, otherwise they could have just announced it publicly, as they do for all their other activities," he said.

It is also rumored that Lewis Hamilton 'tweeted' supposedly from America while he was actually testing in Spain, and used a different helmet livery in order to avoid being identified.

Horner is also critical of Pirelli, rejecting the Italian supplier's claim that it did nothing wrong.

"Everyone in F1 is subject to the rules; teams, drivers and suppliers. The rules also apply to them (Pirelli)," he insisted.

With Mark Webber approaching his 37th birthday, the end of his contract and amid a fractious relationship with Sebastian Vettel, it has been rumored Daniel Ricciardo or Kimi Raikkonen are at the front of the queue to replace him.

Australian Webber, however, sounds confident he will still be on the grid in 2014, as he is reportedly looking ahead to the radical new turbo V6 engine rules.

"There will be so many new things that you'll see many retirements in the first grands prix of the season," he told Italy's Autosprint magazine this week.

"Even winter testing will be complicated because it won't be like today, covering 400 kilometers a day — the cars will be in the pits a lot of the time.

"I think that in the early races, it will be good enough to get to the end of the race and in the points," added Webber.

Horner, meanwhile, is not ready to talk about Red Bull's 2014 lineup.

Asked specifically about Raikkonen, the Briton said at Milton-Keynes this week: "There is only speculation.

"We have not decided what we are going to do beyond Mark's 2013 contract. But if we do have to announce the name of a driver, it certainly won't be in the next week."

Meanwhile, Red Bull designer Adrian Newey had an embarrassing moment while racing a Lamborghini in the 'Super Trofeo' race at Silverstone last week, losing control and smashing into the wall on the warm-up lap.

The video can be seen at: http://www.youtube.com/watch?v=_qH-pNjim3I

Her head, now visibly scarred, struck the loading ramp of a truck, and today she wears an eye-patch to cover her right eye, which was irreparably damaged in the crash.

At a road-safety and spinal injury event in Madrid this week, de Villota revealed the $4,000 carbon-fiber Bell helmet she was wearing in the crash, which was cracked almost in half from underneath the visor to the rear-mountings for the HANS safety device.

A photo, published by Spanish newspaper El Pais, can be seen here.

"Until now only my family and friends have seen it (the helmet)," de Villota is quoted as saying, "but I think it's also important for others to see it as well."

Referring to the extent of the damage to the expensive, specialized F1 helmet, she added: "If this is what we have in formula one, imagine what would have happened if I had not been wearing anything."

Ecclestone says only jail a threat to F1 top job
(GMM) Bernie Ecclestone insists looming bribery charges do not immediately threaten his job at the helm of formula one.

It had been claimed that when German prosecutors formalize the charges against the F1 chief executive, relating to the Gerhard Gribkowsky affair, the sport's owners CVC might depose him.

However, FIA president Jean Todt said last week: "He (Ecclestone) has every right to his job and he does it very well.

"He is also employed by CVC, so it is their decision," the Frenchman added.

Nonetheless, with Ecclestone not having a deputy who could immediately step in to replace him, some names have been floating around the paddock in recent weeks.

One of them was Justin King, the UK supermarket giant Sainsbury's current chief, but Ecclestone told the Bloomberg news agency that he rejected him.

"The people they had wanted, if they had come on board, they would have wanted to be the stars," the 82-year-old said.

Ecclestone, however, said he was open to working alongside a deputy.

"If someone comes up who I think could do a good job, let's have him on board," he said.

"Lots of people have been suggested but I don't think they are the sort of people who could do the things I do."

But he insisted that a mere corruption charge is no danger to his job.

"They (CVC) are not worried with me being indicted, the problem is if I'm incarcerated," said Ecclestone said.

"They're quite laid-back. They're not panicking."

But at the same time, plans to float F1 on the stock market are on the back-burner, until the legal troubles in Germany are resolved.

"It would be silly to go into the market, you don't want any single (outstanding) question", Ecclestone admitted.

Rosberg: Montreal will be tough on the tires
Nico Rosberg is hoping for another strong Formula 1 weekend in Canada. The German claimed victory just over a week ago in Monaco and is now extremely motivated travelling towards Canada. The Mercedes driver expects a tough weekend for the Pirelli tires though.

“The Canadian Grand Prix is always a great event as the fans in Montreal are so enthusiastic. The whole city really loves the race and it's such a lively place to be over the weekend. We receive so much support out in Montreal and it's great to see that enthusiasm," Rosberg said.

The circuit itself is one of my favorite tracks on the calendar and I love the challenge of driving there. It's a very difficult layout to drive because of the low downforce levels required for the long straights and it will be tough on the tires.

Monaco was a fantastic weekend for the team and I'm so proud of the victory that we achieved there. We'll be hoping to maintain that momentum in Canada.