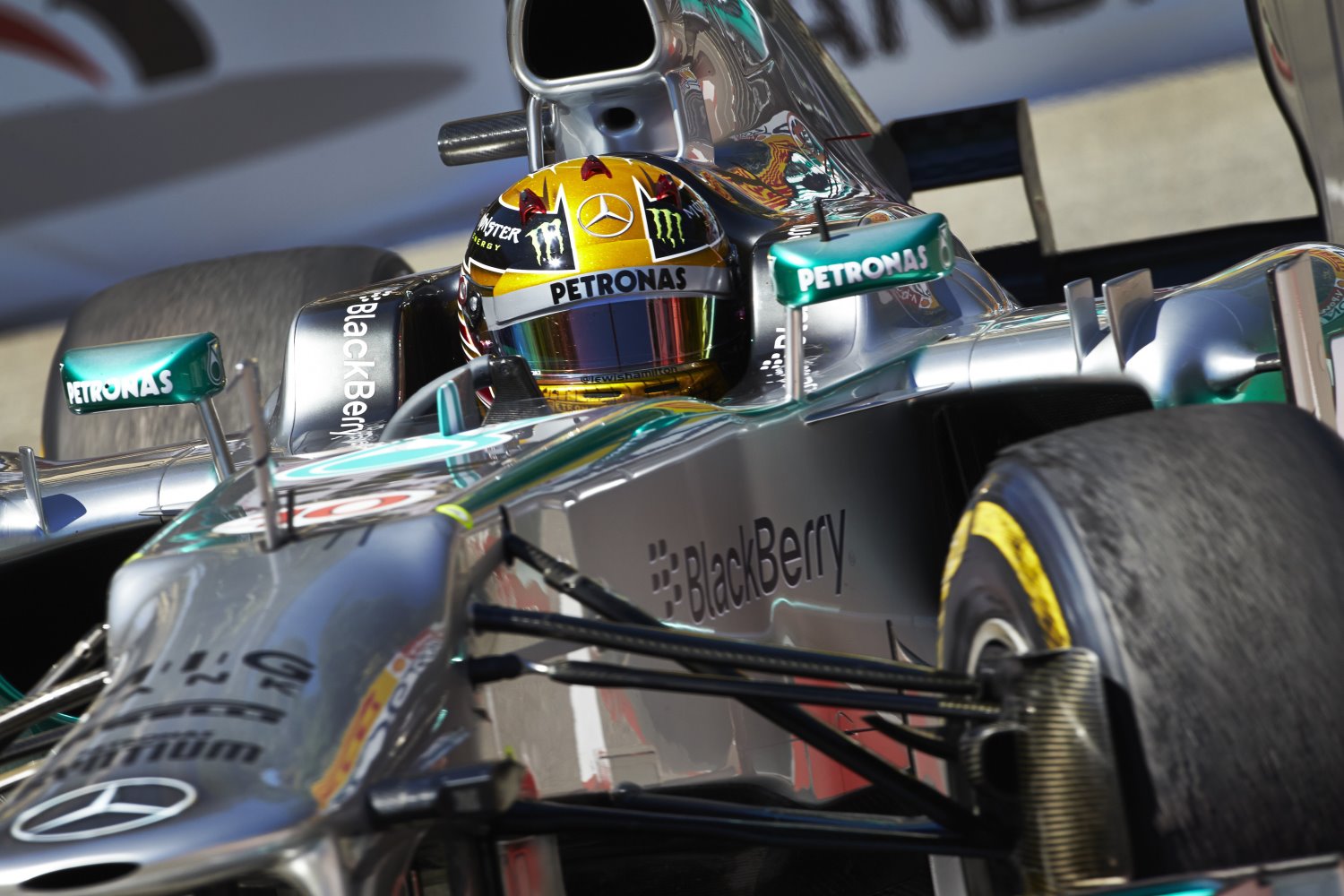 Mercedes still favorite in Monaco
(GMM) As the crucial qualifying session looms in Monaco, Mercedes remains the favorite in the Principality.

Nico Rosberg dominated Thursday practice on the fabled streets, and has locked out pole position since Bahrain a month ago.

But in the races, the W04 burns through the Pirelli tires at an alarming rate.

"In Barcelona we were 70 seconds off in the race, which is one hell of a big chunk, and really difficult to make up in two weeks," said German Rosberg on Thursday.

The problem could be less dramatic in unique Monaco, however, while chairman Niki Lauda told Brazil's O Estado de S.Paulo: "There is no denying that we are making progress.

"We still have a lot to do, but we have good indications that we have evolved in that direction."

"I also saw a long run from Rosberg and it was very fast. They don't have so much tire degradation."

Red Bull's Sebastian Vettel admitted he is hoping for some Saturday rain.

"Otherwise it will be hard to be right at the front. Mercedes looks very, very strong," he told Bild newspaper.

We revealed on Friday that the Finn was told by Bernie Ecclestone to remove the artwork depicting the 1976 world champion because it broke some of the sport's commercial protocols.

Lotus had confirmed that Raikkonen's Hunt tribute was to mark the 40th anniversary of the legendary late British driver's F1 debut.

On top of the helmet was artwork commissioned by Hunt's family.

"It's great that his family is launching products to represent one of my favorite eras of formula one," the 2007 world champion was quoted as saying.

Hakkinen defends F1 tire 'show business'
(GMM) Two former champions have hit back at claims the tire situation in 2013 is ruining formula one.

Mika Hakkinen said he does not agree with those who think Pirelli's heavily degrading tires should be drastically amended.

"I am of the opinion that motor racing is show business," the 1998 and 1999 world champion told Finnish broadcaster MTV3 in Monaco.

Hakkinen said the plethora of "overtaking and pitstops" is interesting for the fans, and so it's up to F1's engineers and drivers to "develop a car and driving style" that looks after the tires.

He said the main reason for the controversy is some teams who are struggling with the situation "using the media to throw fuel on the fire".

Four-time world champion Alain Prost, also in Monaco, agrees: "I think in the past there has been much criticism for there not being a show.

"We should feel very lucky that we have these kinds of races."

At any rate, Paul Hembery has announced that – if the Italian supplier is still in F1 next year – Pirelli will take a "step back" and a more "cautious" approach for the sweeping new turbo V6 regulations.

"I think that we won't be having discussions about tires next year," laughed Force India's Bob Fernley. "It will be a completely different program."

Although Renault, which at present supplies reigning World Champions Red Bull, Lotus, Williams and Caterham with engines, Fernandes said he never pondered switching to a rival brand, with both parties committed to a 'long-term' agreement.

"We have a car partnership with Renault," Fernandes explained to reporters in Monte-Carlo. "Our Formula 1 car is going to be replicated in a road car, so you see a Renault engine with DRS and KERS in a Caterham. We are a long-term partner and it is not just about the racing team. It is about a business; the car business is integral."

Having entered the sport as Lotus Racing back in 2010, Tony Fernandes' squad switched from Cosworth to Renault power at the end of its debut campaign but they remain backmarkers.

Video: London to Monaco for F1 Monaco GP 2013!
Rosanna leaves behind the cold, wet English summer to head for the sun and super yachts in the CÃ´te d'Azur for the Monaco Grand Prix 2013.

Fernandes not planning on leaving Caterham any time soon
Tony Fernandes insists he has no plans to quit Caterham amid reports that he would plough the potential proceeds of a sale into QPR.

"We went in with our eyes wide open and we are too far down the line with Caterham so, no, I will not be leaving," said Fernandes, who was speaking ahead of this weekend's Monaco Grand Prix.

"And it's not about winning the world championship for me, it's about building a car, which has always been my dream and that's progressing quite well.

"I don't need to be world champion to sell lots of cars. I need to have a brand where people say 'I know that brand' and have a price point which allows people to aspire to own one of the cars.

"With all due respect, no-one is going to run out tomorrow and buy a McLaren or a Ferrari. There are not many cars on that grid you can translate into a sports car you can buy, so that's the market I'm after.

"Last year was a real disappointment. I thought by this year we would definitely be in the midfield, and if we hadn't have messed up last year, we could have been.

"When John Iley (head of aerodynamics signed from McLaren) came over last year we tried to be a bit too clever with the blown diffuser and it screwed us up.

"If we had just continued on our normal path we probably would have been in the midfield by now, so we've learned the hard way. But on the business side it's done everything I wanted it to.

"Every week we are now getting significant points (of downforce) in the wind tunnel, as opposed to what was not very aggressive growth over the first two years.

"I also think we've the right people now, but would I say we are 100 per cent where we want to be? No. We've a nice facility in Leafield and we're going in the right direction.

"I'm not saying we are going to be world champions any time soon, but I do believe if we continue this way then we have a good chance of progressing."