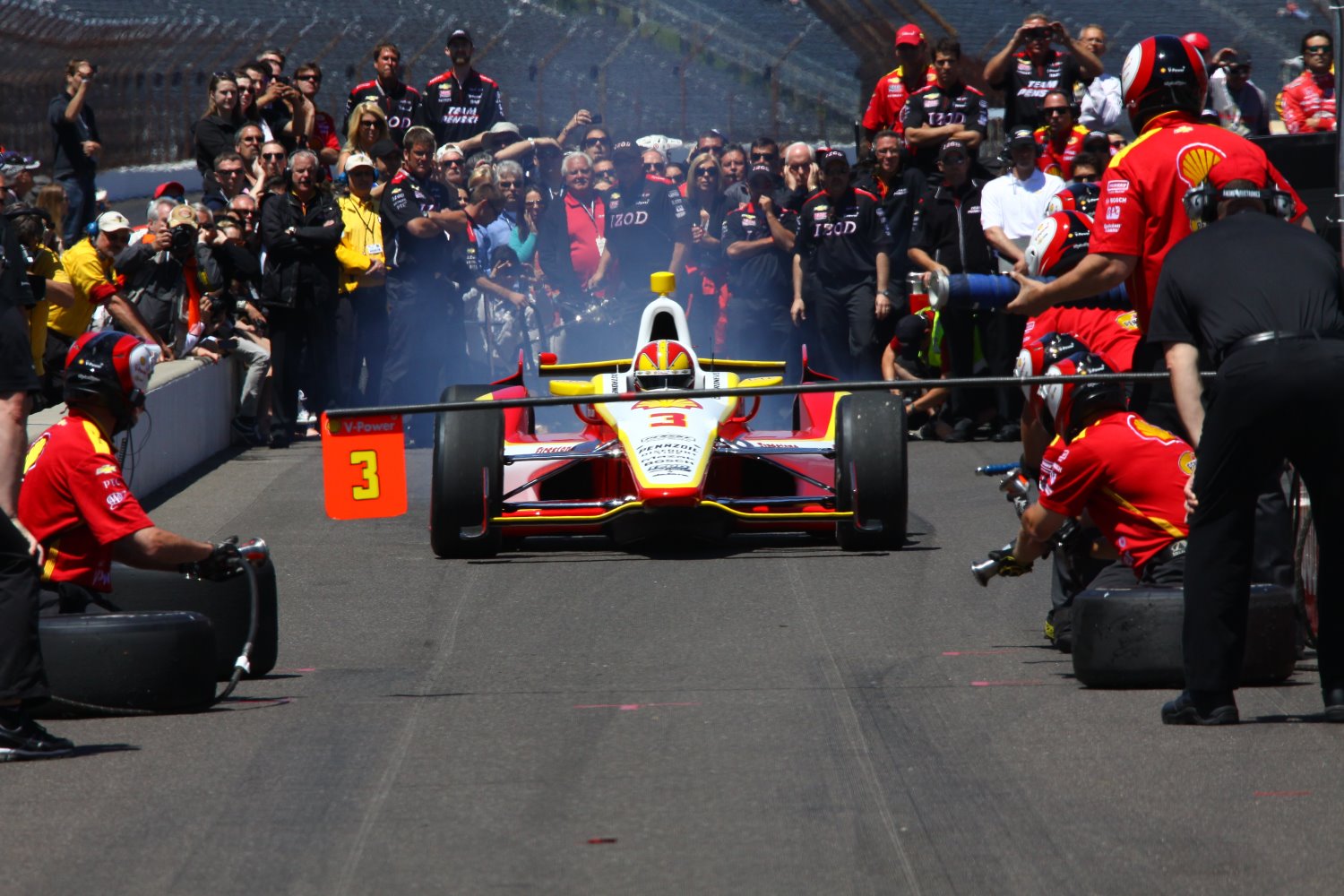 Team Penske and Helio Castroneves continued their mastery of the Indy 500 Pit Stop Challenge, winning the annual competition to determine the fastest Indianapolis 500 pit crew Friday, May 24 at the Indianapolis Motor Speedway.

Castroneves and Team Penske beat Dario Franchitti and Target Chip Ganassi Racing, 14.475 seconds to 14.854 seconds, in the final round. This is the 14th victory for Team Penske and sixth victory for Castroneves in the Pit Stop Challenge, both event records for a team and driver.

"We do have the best guys in the business," Castroneves said. "What impressed me most, it's overcoming those unexpected scenarios, and that's why they won today because I should have stopped on the mark, and I didn't. But I guess they got used to it now. So now there is no excuse in the race."

Teams changed four tires and performed a simulated fuel hookup during each round of the competition, which started with 12 teams.

Three-time Indianapolis 500 winner Castroneves left the starting line late and overshot his pit box by about 3 feet, falling behind fellow three-time Indianapolis 500 winner Franchitti and the Ganassi team. But Team Penske crew members compensated with a stop nearly a second quicker than the Ganassi crew, which was slowed by a problem with the right-rear tire change.

Castroneves was the last driver to win the Pit Stop Challenge and the Indianapolis 500 in the same year, in 2009.

"We practice a lot at the shop when we can," Hanrahan said. "It doesn't always happen when we want it to, but we work hard at it, and we've got a dedicated car for it. Shaun Rinaman is actually our pit stop manager, so we do what we can and, luckily, today everyone just kept digging. We overcame a problem out there and nobody gave up, and that was very important."

Castroneves and Team Penske advanced to the final by beating Oriol Servia and Panther/Dreyer & Reinbold Racing in the semifinals. Franchitti and Target Chip Ganassi Racing beat reigning IZOD IndyCar Series champions Ryan Hunter-Reay and Andretti Autosport in the other semifinal.

MODERATOR: You see the power of the three-time winner here, don't you? At the Economaki Press Conference Room, we've got the winner of the annual pit stop contest.

This is a guy that's worked with Helio for a while. Helio, this is an interesting day and an interesting competition. It's very important to your team. This is really the day where the star are the people that are behind the scenes. And I know that means a lot to you.

HELIO CASTRONEVES: No, absolutely. For me to be sitting here again, it's so credit for the entire Team Penske. The reason I say that, it's not only from the Group No. 3 but also the 12 and the 2, because when they go into the shop, they practice day in and day out. And they end up keep pushing each other. And we do have the best guys in the business. That's why — today unfortunately the right lane was very slippery. As you guys could see, I was really going. What impressed me most, it's overcome those unexpected scenarios, and that's why they won today because I actually — I should stop on the mark and I didn't. But I guess they got used to it now. So now there is no excuse in the race.

But I want to thank Shell, V-Power, Pennzoil Ultra, because this is the first race that we have in their colors. And it's a great momentum. It's a fantastic momentum for all of them. I am extremely excited to carry this momentum for Sunday. Today we had a very good practice, even that the time doesn't show, but we feel we were very close to everybody. We unfortunately had a short gear and the weather was a little bit cooler, and so we create a lot of power in the Chevy engine.

So right now we feel very confident. This is just exactly what we needed.

MODERATOR: Introduce the folks to your crew chief.

CASTRONEVES: This is Sean. Look at that, I can't believe it. My new engineer for the season, it's John and Jonathan, and Casey, Gary, Mike, another Gary. Then we have Doug, we have another John Turpin, and we have my man on the strategy which is John Erickson. So you should actually talk to this guy here, because he's the one in charge of those boys. He deserves the credit.

MODERATOR: Let's talk about it. I know this means a lot to you as a crew chief is that your guys performed because Helio knows, he's won this thing three times, that race can be won or lost right out there in pit lane.

SEAN HANRAHAN: Absolutely. We practice a lot at the shop when we can. It doesn't always happen when we want it to, but we work hard at it and we've got a dedicated car for it. Shaun Rinaman is actually our pit stop manager, so we do what we can and, luckily, today everyone just kept digging. We overcame a problem out there and nobody gave up, and that was very important.

MODERATOR: Here is what we want to do. This is one of the old traditions we've done here for a while. I'm going to hand the microphone. I would like you to give your name and your hometown so people know who you are. This goes upstairs, by the way.

Actually, a lot of it, as many of you people know, Penske shops for many, many years were in Reading, Pennsylvania. Congratulations.

Open it up to questions now. How many times is this that you have won?

CASTRONEVES: Six times with the No. 3, so it's great.

MODERATOR: How many times for Penske?

CASTRONEVES: 14 times. Setting the record with the victories and the wins, which is great.

MODERATOR: That's impressive. Very good. I will bring a microphone to you so they can hear it upstairs.

ERICKSON: How long was that last stop? How far did he miss?

HANRAHAN: He was at least 3 feet longer than the marks.

ERICKSON: We can't have that Sunday.

CASTRONEVES: Didn't we just win? So that means no excuse.

ERICKSON: We've got to take the lesson from that one. I wanted to clarify, I heard 4 feet, but Sean said 3.

HANRAHAN: Three feet. I'd like to see it. (Laughter)

MODERATOR: We have video evidence. How about some questions for the group for our champions in the Pit Stop Competition? Do we have any?

Q: So, Helio, I know the team has practiced in pit stops. I don't know if you had a chance to do it in car practice this morning, but have you overshot your pit a little bit so they're used to moving the way — they made it look so easy. They kind of slid with you.

CASTRONEVES: Well, as you can see, they had a lot of practice over the years. This is a talent that doesn't come just one day. It's actually, many, many, years and many races. But the interesting thing, these guys, they went back to North Carolina, to Mooresville, after qualifying Sunday, and they were working at the shop. They did not have enough time because they were turning over the cars, and everybody was working extremely hard for the small details. And we didn't have enough time to practice. Even myself, I didn't — normally we practice around here at the Gasoline Alley, and we just didn't.

So it's proof that over the winter and every day we go out there, it's just to prove working away from the racetrack, it's paid off today. And we're extremely happy.

Q: Congratulations to you again. Nice to see you again.

CASTRONEVES: Nice to see you.

Q: I'll ask you a different question. I know you are looking at your career and racing and so forth. Have these guys been with you for a while? And kind of like family, and you're real close like brothers.

CASTRONEVES: He was with Team Penske over 30 years. Sorry, 20 — I just added.

And John Erickson, it's been three years with us, but he's been with Team Penske as well for a long time in the sports car; and Sean about four years as a crew chief. But earlier, he came from the Ganassi boys a long time ago. He's been working as a backup, and four or five years ago he replaced actually Rick Rinaman, which has been my crew chief for many, many years, and from there on he's on. So many, many guys. But I think Gary is the one that knows all my stories. (Laughter)

Q: One more question I want to ask you. It's one of my favorite questions on Race Day. I know that this is going to be more serious — you guys are joking and being really fun right now, but it's going to get serious Sunday. What is it going to take for you and your team to win this year's Indy 500?

CASTRONEVES: Because the field is so close and we have at least 20 cars — that is a very good question, because we have at least 20 cars capable to win this race on Sunday. That's why today I'm so happy for those boys, because this is to prove that the race can be won on the pit stops. My previous win, it was actually won on that, as well. We were able to execute in the right time and they were able to put me in a very good opportunity to execute. So I'm counting with them.

That's why I'm extremely happy today, because it gives me — not them, because they're already confident — but gives me confidence to go out there and trying to pass as much cars as I can. So that means I make their job less difficult and, hopefully, with that we're going to be able to win this race. Thank you.

Q: When you guys walked into the room here a few minutes ago, you were immediately all measured for rings for winning this thing.

Q: You've got a lot of rings. You've got one on right now. Which one is that, and why did you pick that one?

Q: You've had such great luck since "Dancing with the Stars" and all this happening. What do you feel for the future?

CASTRONEVES: Wow, good question. As long as I keep winning and as long as I keep being competitive and as long as I have this kind of crew pushing me behind, I certainly want to go as far as the limit goes. You can't predict, the guy upstairs, you know, the great Lord is the one to decide what's going to be my destiny. But now I'm happy racing.

Q: You have won the admiration of the American public.

CASTRONEVES: Thank you, I appreciate that. That's very kind of you. Thank you.

MODERATOR: Other questions for Helio?

CASTRONEVES: All right, boys — got to work, man. (Laughter)

MODERATOR: Now, now, this is one thing where we break tradition because these guys work hard. Let's give them a round of applause.