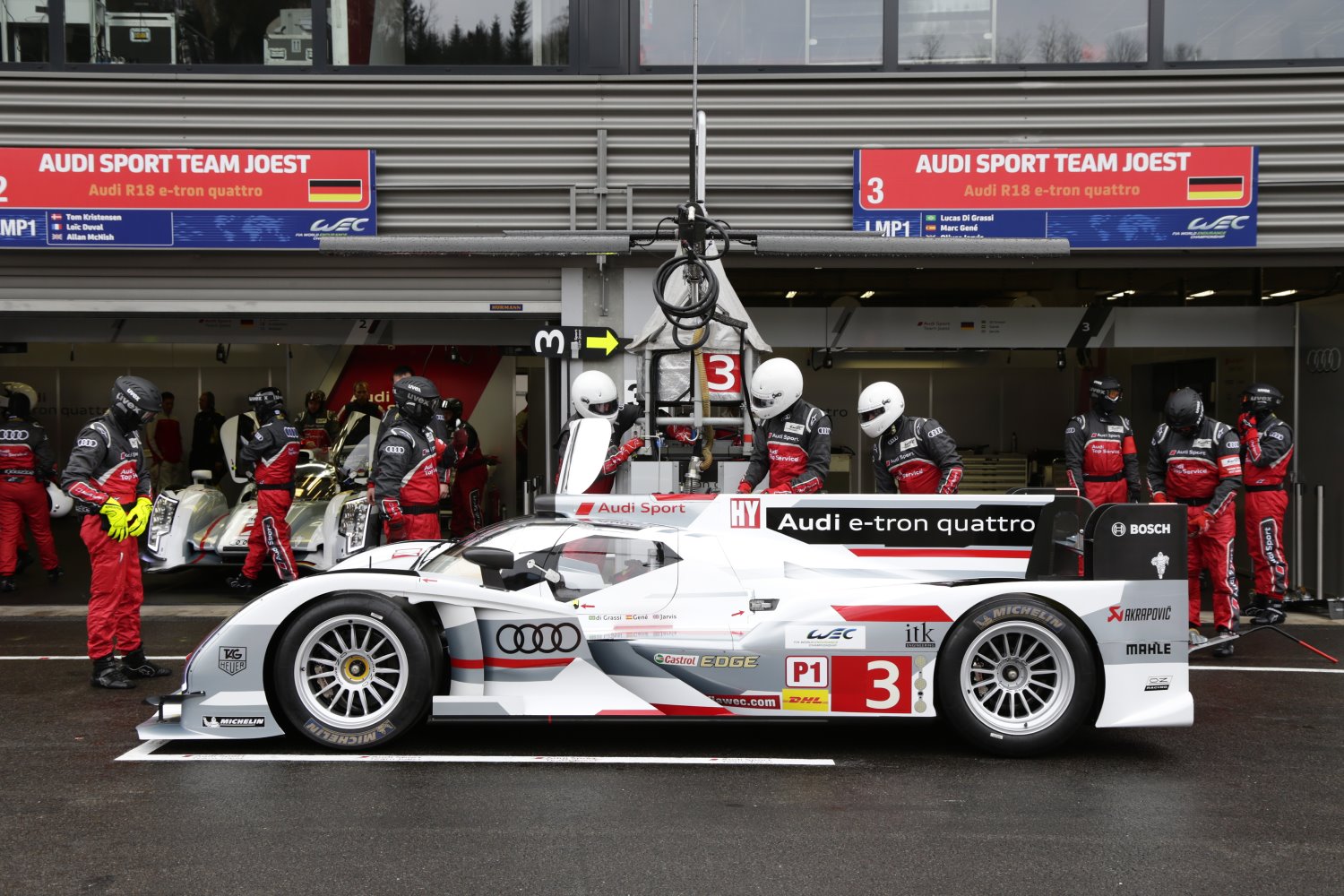 Five more weeks until the Le Mans 24 Hours celebrates its 90th anniversary. Over the period of 14 years, Audi has won this classic race eleven times and in doing so has consistently been delivering top performances in aerodynamics as well. They are a major reason for excellent lap times being achieved again and again despite the reductions of engine output due to the regulations.

A look at Audi’s first sports prototype is quite revealing, as the concept of the Audi R8R from 1999 clearly differed from the current R18 e-tron quattro – not only because the first race car had an open cockpit as opposed to the closed one of the current car.

On the road from the past to the present, not a single aspect of aerodynamics has remained untouched:

-The radiators of the R8R engine still laid flat at the front end. The warm exit air escaped from the hood in front of the cockpit opening and partially flowed across the top of the cockpit and to the right and left. To optimize airflow to the rear end, including the rear wing, Audi has been integrating the radiators and intercoolers into the sidepods as of the Audi R8 (2000). This clearly improved the airflow.

-The introduction of diesel direct injection in the Audi R10 TDI in the 2006 season, due to the different combustion process, increased the cooling requirements by around 30 percent. Furthermore, the Audi R18 e-tron quattro, which has been fielded since 2012, has a low-temperature circuit for cooling the hybrid system – which poses an additional challenge. Still, no other Audi LMP sports car has ever been as aerodynamically efficient as the R18 e-tron quattro.

-With the innovative micro-tube radiator, Audi managed to make a major step ahead. The conventional aluminum louver-finned radiator that creates high aerodynamic drag is now a thing of the past. The coolant in the R18 e-tron quattro flows through a system made up of more than 11,000 small tubes per radiator, and the radiators no longer require fins. These radiators can be freely configured. With the same radiator size, the pressure drop of the airflow can be reduced by more than 25 percent. Alternatively, with pressure conditions remaining the same, the size of the radiator can be reduced accordingly.

-With respect to the ratio between downforce and aerodynamic drag, Audi has continually optimized the LMP sports cars. This ratio expresses how much the aerodynamicists have improved the race car’s downforce without a corresponding increase of aerodynamic drag.

-Audi achieved these advances despite the fact that the regulations have increasingly restricted the latitude for the aerodynamicists. For example, when the project was launched in 1999, the rear wing was allowed to fill a maximum volume of 2,000 mm (width) x 400 mm (length) x 150 mm (height). Today, these dimensions have been reduced to 1,600 x 250 x 150 mm. Through a large number of individual solutions, such as the rear wing suspended from the top (in use since the Audi R15 TDI in 2009), Audi has compensated for a major part of the lost downforce. It allows significantly improved airflow to the wing. This principle was subsequently used by many others too.

-The specifications for the underfloor were significantly modified as well. As of the Audi R10 TDI (2006), the specifications have been requiring a seven-degree increase of the profile cross-section toward the sides and a central wooden board being mounted underneath the chassis. Despite such limitations, a modern LMP sports car achieves downforce levels that would theoretically allow it to run on the ceiling of a tunnel without falling down.

-The distribution of the aerodynamic loads on a sports car, for instance, harbors surprising elements, such as the front diffuser together with the rear wing generating half of the downforce, as does the underfloor with the rear diffuser. This downforce is counteracted by the inevitable lift that is generated by the airflow around the cockpit and above the body. It equates to around a fourth of the downforce value.

"The lap times reflect the significance of the strides that have been made in aerodynamics," emphasizes Head of Audi Motorsport Dr. Wolfgang Ullrich. "Of course there are many other influencing factors – the powertrain, the tires, the chassis, the ultra-lightweight design or the distribution of weight. To name just one example for the sake of comparison: In 2006, the fastest race lap at Le Mans was 3m 31.211s. The R10 TDI back then had 12 cylinders, 5.5 liters of displacement and, delivering more than 650 hp, was our most powerful LMP race car. Six years later, the best lap time was 3m 24.189s. Our cars had become more than seven seconds faster. But the V6 TDI engine of the Audi R18 ultra in 2012 was only allowed to have a displacement of 3.7 liters and delivered around 510 hp. A major share of these advances is owed to optimized aerodynamics. This year, we’re competing with a long-tail body that we expect to deliver further advantages for Le Mans."