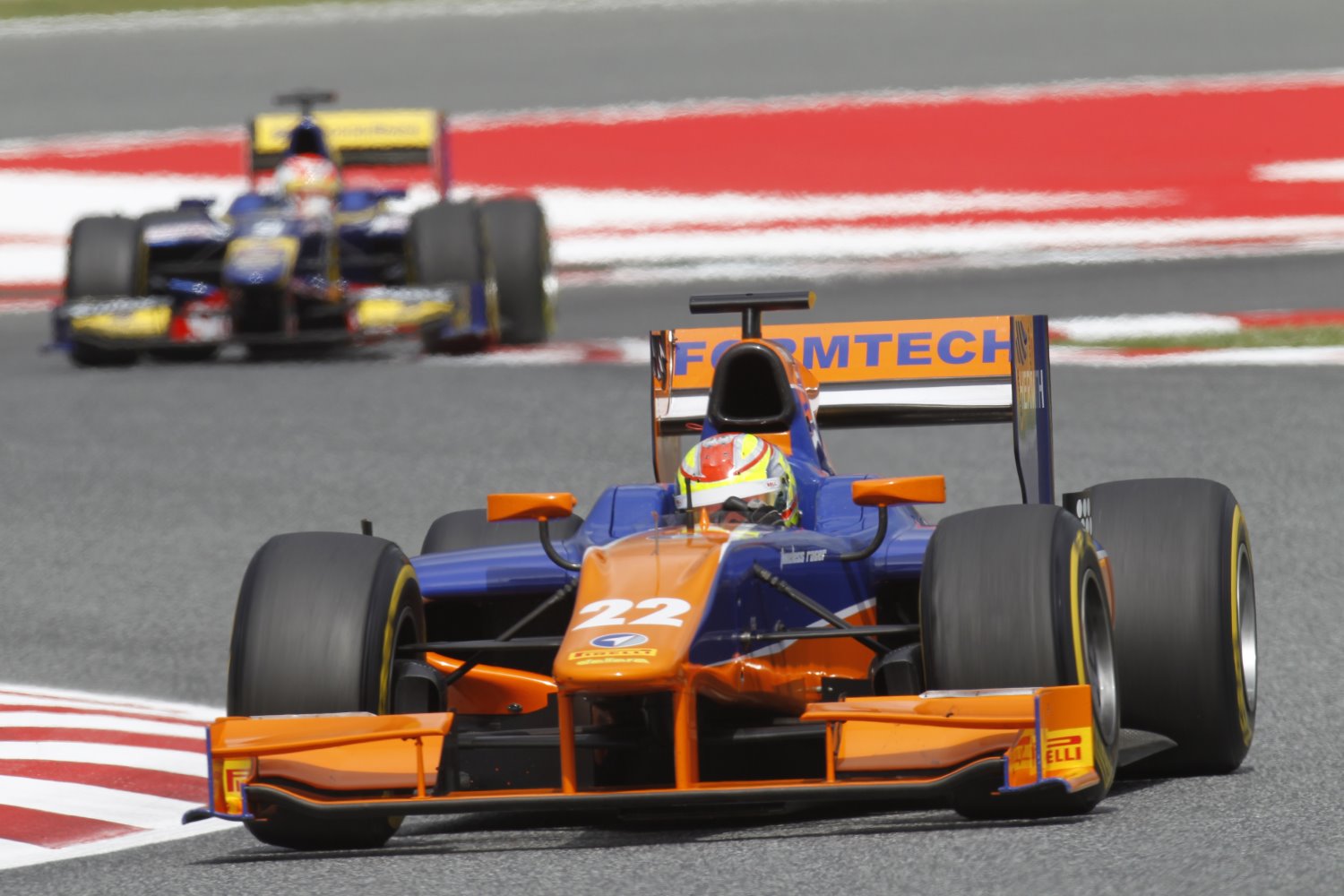 UPDATE Jolyon Palmer lost his podium from the first Barcelona GP2 race after being one of three drivers penalized for incidents during the event.

Palmer was given a 20-second post-race penalty for forcing Sam Bird off the road while defending his position late in the race. The punishment drops Palmer from third to 10th in the results, and elevates Jon Lancaster onto the podium in his GP2 return with new team Hilmer, which also claimed victory with Robin Frijns.

Bird spun into retirement as a result of his clash with Palmer, but also gets a penalty of his own for an earlier collision with polesitter Marcus Ericsson, whose DAMS car sustained suspension damage in the tangle at the chicane.

Bird was given a five-place grid penalty for Sunday's race, which will drop him to the back of the field along with Nathanael Berthon, the other driver penalized.

Berthon was given a 10-place demotion — although he would have only been 25th on the 26-car grid anyway — for crashing into Sergio Canamasas and Tom Dillmann.

The Trident car was launched over the back of the other two on the run to the hairpin, ending Berthon and Canamasas' races, although Dillmann continued to finish sixth on the road.

Robin Frijns has claimed his debut GP2 win as the Series returns to Europe, claiming victory in this afternoon’s feature race in Barcelona by utilizing a sharp get away and smart race strategy to lead home a fast charging Felipe Nasr and Jolyon Palmer.

Poleman Marcus Ericsson made a super start when the lights went out to easily lead his rivals away, while behind him Sam Bird was not so sharp off the line: Fabio Leimer pushed left around him but James Calado was already there, and the inevitable contact pushed the pair backwards as Frijns got off the gas and followed Bird into turn one behind Ericsson, Stefano Coletti, Nasr and Stephane Richelmi.

Lap 6 was the first time the pitlane opened for fresh tires, and Frijns (P9), Palmer (P11) and Alexander Rossi (P14) jumped in to take advantage of the fresh air behind. Ericsson, Bird and Jon Lancaster were forced to respond next time by, with the Swede’s stop slow enough to drop him back into the pack and Bird re-emerging just behind Frijns, an early indication of the Dutchman’s speed, while Coletti and Nasr had little choice but to stop next time by.

Within a few laps everyone else had stopped apart from Johnny Cecotto, Tom Dillmann and Mitch Evans, all of whom were on hard tires, and war had engaged behind them. Ericsson tried to squeeze by Kevin Giovesi but was stuck between the Italian and Bird, hit the latter before retiring with damage shortly afterwards, with nothing to show for his fine efforts yesterday.

Frijns continued to head the already-stopped field, with Palmer, Bird, and Coletti circulating right behind, and finally claimed the overall lead on lap 28 when Evans eventually pitted. Dillmann had taken on another set of hard tires and was slicing his way through the field, while Nasr was doing the same up ahead, having preserved his tires until there were only 5 laps to go.

Which was when the heat of battle became white hot. Nasr sliced up to teammate Palmer, clipped his rear but pushed through for P2 at turn 2, but when Bird looked to follow he was soon into the gravel trap and spinning into retirement. Lancaster made short work of points leader Coletti in a great showing for his Hilmer team’s abilities. Dillmann ran outside Coletti at turn 3, then inside Lancaster next time round, but then ran too wide around Palmer and undid his good work.

But out in front Frijns was supreme, delighted to be able to pull away from the war behind him to win by 3.3 seconds from Nasr, who ran out of laps to hunt the Dutchman down. Palmer held on for third with Lancaster, Coletti and Dillmann nose to tail behind him, while Rossi just held Kevin Ceccon back for P7, with Johnny Cecotto and Rio Haryanto filling the final points paying places.

Coletti retains the series lead on 74 points from Nasr on 66: Leimer’s disappointing race sees the Swiss driver drop to P3 on 54 points, ahead of Palmer on 37, Bird on 33, while today’s win pushes Frijns up to 25 points. Results