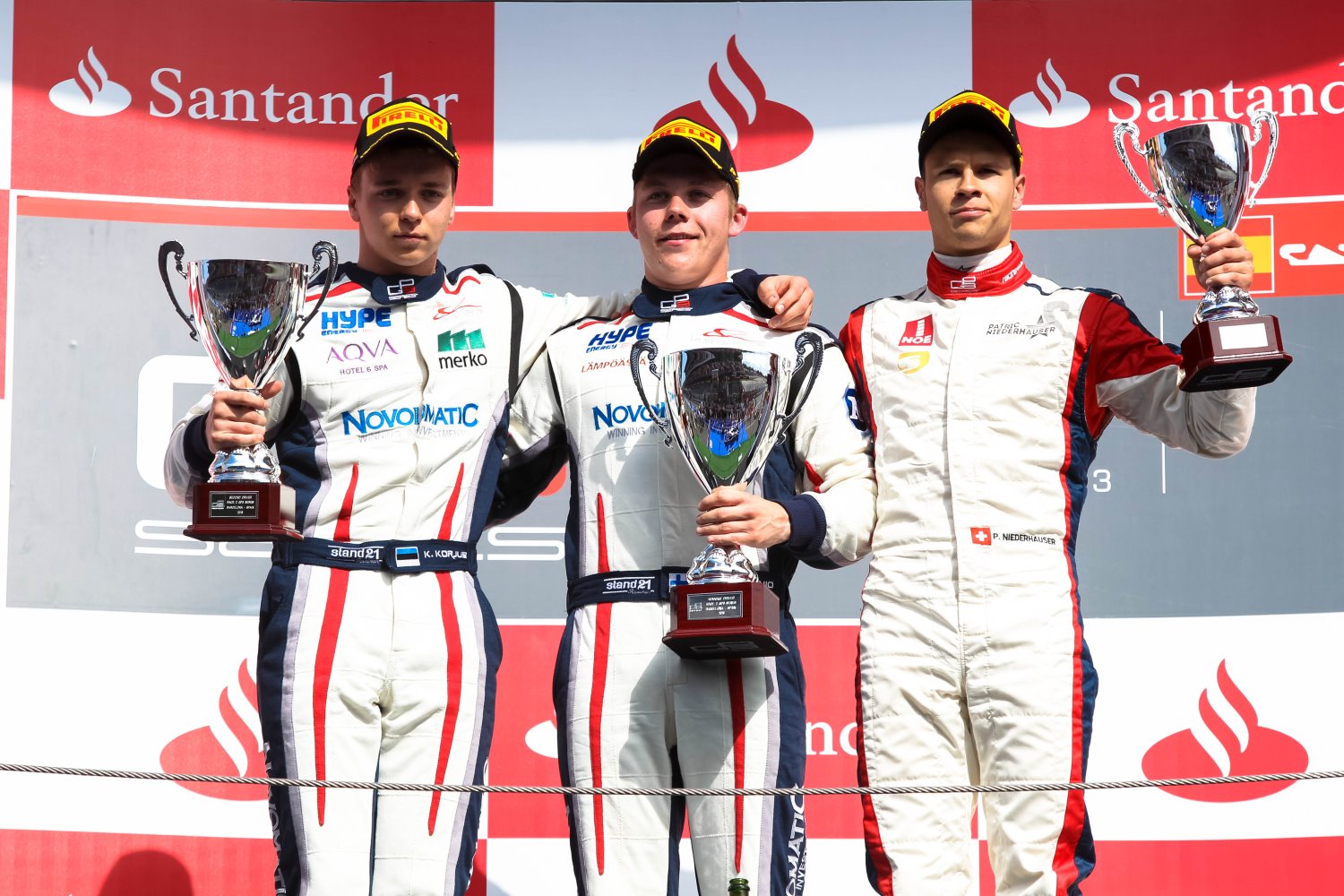 What a debut: Koiranen GP, newcomers to GP3 Series this season, certainly made an impression with a superb one-two with Aaro Vainio and rookie Kevin Korjus in their maiden race weekend. Jenzer Motorsport’s Patric Niederhauser joined the pair on the podium.

Vainio made a superb start from fourth on the grid to be leading at the first corner in front of his teammate Korjus who had started from reverse pole. Tio Ellinas, Race 1 winner, also made an impressive getaway from P8 up to fifth but best start of the day went to his fellow Marussia Manor Racing driver Dino Zamparelli, who started from last on the grid and was P13 by the end of lap one.

The safety car was briefly deployed after lap one following an incident which saw Melville McKee out of the race for Bamboo Engineering. Robert Visoiu (MW Arden) and Emanuele Zonzini (Trident) also had an excursion through the gravel.

MW Arden’s Daniil Kvyat had a premature end to his race after contact was made with Ryan Cullen, when the Brit attempted a pass on the inside. Vainio and Korjus set an impressive pace to build up a large advantage of five seconds at the front of the field with a five way fight for P3 with Nick Yelloly leading the chasing pack.

Trident’s David Fumanelli was keen to pass the Brit’ for the rostrum position and the Italian tagged the back of the Carlin machine which sent Yelloly into a spin at turn 14, which dropped him down the race order. Ellinas seized the opportunity and shot past the dicing duo to snatch P3 whilst Fumanelli continued thus with damage to the nose of his car.

Sainz Jr (MW Arden) had started from outside of the top ten began plucking his way through the order and was hot on the heels of ART Grand Prix’s Jack Harvey, finding a way through for P7. The Koiranen GP duo began to manage a more controlled pace at the front, with a ten second lead back to P3. Ellinas clearly began suffering with tire degradation so Niederhauser harassed the Cypriot, the pair having a fantastic battle with very clean and respectful moves, with the Swiss snatching the third place away from his rival.

At the checkered flag, Vainio crossed the line with a one second advantage over his Estonian teammate to secure his second victory in GP3 and conclude a very positive start for the newcomers. Korjus also pocketed a further two points for posting the fastest lap. Niederhauser finished P3, with all eyes on the tussle for P4. Ellinas edged ahead of Fumanelli, Conor Daly (ART Grand Prix), Sainz Jr and Harvey for the final points scoring places.

Ellinas heads the Driver’s Standings on 39 points, with Niederhauser on 28 and Vainio on 15.

Round 2 of the Series heads to Valencia on 15-16 June with a test session prior to this at Budapest 05-06 June.