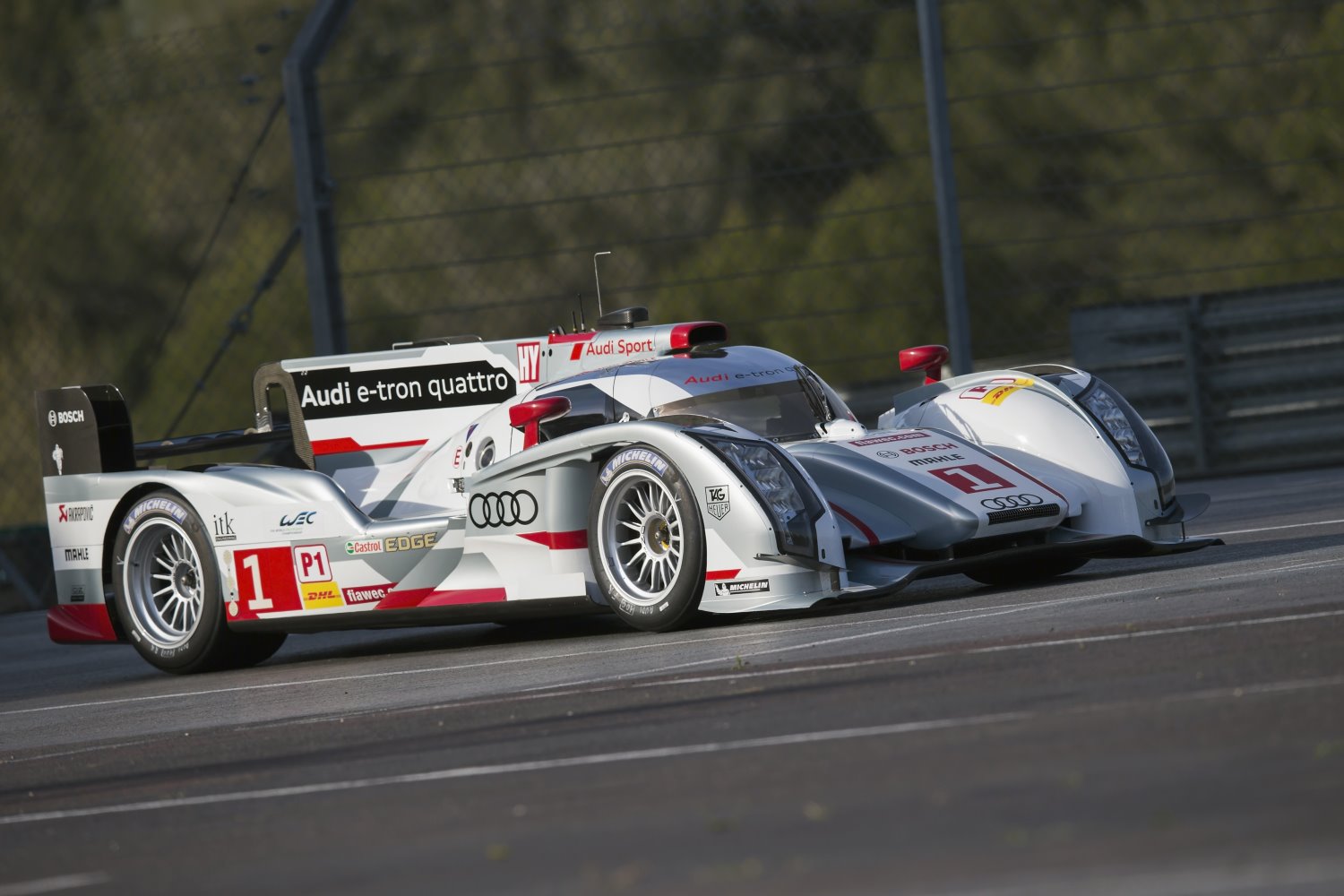 Audi is pursuing ambitious aims at round 2 of the FIA World Endurance Championship (WEC) on May 4 at Spa. The version of the Audi R18 e-tron quattro that was victorious at the season opener is to extend Championship leader Audi’s points advantage. At the same time, a new long-tail variant of the hybrid sports car will be tested in Belgium. Audi Sport Team Joest thus wants to optimally prepare for the Le Mans 24 Hours, the pinnacle of the season for the sports prototypes held on June 22 and 23.

Comparison in racing conditions: Two versions of the Audi R18 e-tron quattro that, also visually, can be clearly distinguished from each other will be running at Spa. The winners of the opening round, LoÃ¯c Duval/Tom Kristensen/Allan McNish (F/DK/GB), and the current World Endurance Champions Marcel FÃ¤ssler/André Lotterer/Benoit Treluyer (CH/D/F), will be starting with the aerodynamic variant that was victorious at Silverstone. It generates optimal downforce for track types such as the 7.004-kilometre circuit at Spa.

The third Audi R18 e-tron quattro, driven by Marc Gené/Lucas di Grassi/Oliver Jarvis (E/BR/GB), on the other hand uses an aero package that has been optimized for the high-speed Le Mans track and can be recognized by its lengthened rear section. The comparison, however, is not focused on absolute lap times. Instead, the team will analyze the time differences to be expected between both models on individual track sectors. In addition, practical aspects of using the second body version will be reviewed and data generated for the fielding in the race at Le Mans.

The focal point of the spectators’ interest will yet again be the thrilling battle between World Champion Audi and challenger Toyota. In the seven meetings that have taken place since last June, the score is at 4-3 for the sports cars from Ingolstadt and Neckarsulm in the competition with Japan. The Spa 6 Hours will be held on Saturday of the first weekend in May. The TV channel Eurosport will cover selected stages of the race whereas the full racing distance can be watched on audi-liveracing.com on the internet.

Topics of the weekend

– Will Duval/Kristensen/McNish be able to extend their lead of the standings?
– How well will the World Champions FÃ¤ssler/Lotterer/Treluyer fare?
– How will the battle with Toyota develop?
– Which manufacturer will travel to Le Mans with a points advantage?

Quotes by the officials

Dr. Wolfgang Ullrich, Head of Audi Motorsport: “As always, Audi will be using the race at Spa as a ‘dress rehearsal’ for the Le Mans 24 Hours in June. Spa is a race track with a character that’s completely different from Silverstone. We thoroughly reviewed the first race of the season and accomplished our tasks in order to be well prepared for the second round of the WEC. Fielding the Le Mans aero variant on the third vehicle that hasn’t been optimized for the lap times at Spa is an important element of the preparation for the 24-hour race."

Ralf Juttner, Technical Director Audi Sport Team Joest: “The comparison with our competitor will start from scratch again at Spa. We can expect our opponent Toyota to compete with the latest technological update. For the first time this year, we’ll be running with three cars. That means more work for our team. Spa’s a great track and a race that definitely belongs on the WEC calendar. The new Audi R18 e-tron quattro was immediately reliable and fast."

Facts and quotes by the Audi drivers

Marcel Fassler (36/CH), Audi R18 e-tron quattro #1 (Audi Sport Team Joest)
– Drove the fastest race lap at Spa a year ago
– Had to admit defeat at Silverstone by only 3.4 seconds
“Spa’s one of my favorite tracks. In the LMP sports car, the circuit is a fantastic challenge. Eau Rouge, Blanchimont and the fast downhill double left-hand turn are particularly nice. Plus I like the ambience in Belgium extremely well."

Andre Lotterer (31/D), Audi R18 e-tron quattro #1 (Audi Sport Team Joest)
– Regards Spa as his ‘home’ track
– Is the runner-up in the standings after the 2013 season opener
“I grew up in Belgium and went to the track as a child. That’s why Spa is always special for me. It’s a fast track that should be suiting our car well. My two team-mates really enjoy driving there too. I’m hoping for us to be able to reverse the order of the top two results of the Silverstone weekend."

BenoÃ®t Treluyer (36/F), Audi R18 e-tron quattro #1 (Audi Sport Team Joest)
– Winner of the 2013 Sebring 12 Hours
– The World Champion was the runner-up in Belgium last year
“For my team-mate Andre Lotterer, Spa is a ‘home’ track in a way. We’ll be running for the first time now in this year’s R18 e-tron quattro and the new tires on this track. Of course we’d like to be on the podium again right after Silverstone – ideally on the top though."

Loic Duval (30/F), Audi R18 e-tron quattro #2 (Audi Sport Team Joest)
– Won the Spa 6 Hours in the Audi R18 ultra last year
– Leads the standings with his team-mate after the success at Silverstone
“I achieved my first victory with Audi at Spa last year. In May, the weather in the Ardennes is often unstable. Together with Allan and Tom I’d like to repeat the success at Silverstone and extend our World Championship lead."

Tom Kristensen (45/DK), Audi R18 e-tron quattro #2 (Audi Sport Team Joest)
– The Dane achieved his first victory of the season at Silverstone
– Ten years ago, he won at Spa in the Audi R8
“Spa for us drivers, the cars and the teams is a huge challenge. It’s a typical track from a different era with many vertical differences and corresponding compressions, with blind turns and frequently changing weather. The mechanics and all the other team members did an outstanding job at Silverstone. The pit stops and strategy were good. Spa’s our last preparation in racing conditions before the biggest competition of the year at Le Mans."

Allan McNish (43/GB), Audi R18 e-tron quattro #2 (Audi Sport Team Joest)
– Achieved the fastest time in qualifying at Spa last year
– At the WEC opener in England, celebrated his first victory in an R18 e-tron quattro
“I always enjoy driving again at Spa. The track follows the topography in an ideal way. That’s a hallmark of many good circuits. Some of the world’s nicest corners are found at Spa, such as Eau Rouge or Pouhon. The races there are always thrilling, partially due to the weather but also because there are always surprises. The track is rough on the drivers, the car and the tires. In addition, we’re expecting the competition at Spa to be tough due to Toyota. We drivers and our engineers have found a very good rhythm of working together."

Marc Gene (39/E), Audi R18 e-tron quattro #3 (Audi Sport Team Joest)
– Won the race at Spa on making his Audi debut a year ago
– Has celebrated three sports car victories at Spa since 2008
“I’m looking forward to one of my favorite tracks that I’ve won at three times before. For us, it’s the big preparation for Le Mans. The weather’s often unpredictable. For Oliver Jarvis, Lucas di Grassi and me, it’s the only opportunity to adjust to each other in racing conditions. Until now, I’ve only driven the Audi R18 e-tron quattro in tests. I’d like to repeat last year’s victory."

Lucas di Grassi (28/BR), Audi R18 e-tron quattro #3 (Audi Sport Team Joest)
– Is starting his third sports car race with Audi
– Was the runner-up in the Sebring 12 Hours in March
“I’m experiencing my first WEC race in 2013 at Spa. I’ve got fond memories of this legendary circuit from GP2 and Formula 1. There’s no nicer track if you’re running in a fast car. I’ll be starting with two different team-mates than I did at Sebring. We’ll be able to gear up now for the biggest task of the year in racing conditions."

Oliver Jarvis (29/GB), Audi R18 e-tron quattro #3 (Audi Sport Team Joest)
– Celebrated a class victory with Audi at Daytona in January
– Won the Sebring 12 Hours in March
“My sports car career in Audi’s factory team began a year ago at Spa. We immediately took a podium. It’s a great feeling to return now. After a good race at Sebring I’m travelling to Spa even better prepared than I was twelve months ago. For the first time, I’m running with my two new team-mates. And we’re developing the car with special aerodynamics for Le Mans. That’ll be our personal warm-up for the 24-hour race."

The Audi drivers at Spa

Marc Gene about the track at Spa

There’s no other place where you can feel the centrifugal forces within your body as much as you can in Eau Rouge. Spa is the second-longest track after Le Mans and the weather is always changeable in the Ardennes. Eau Rouge remains the greatest single challenge. In Formula 1, due to the smaller engines and lower weight, you run flat-out there but in the heavier sports car Eau Rouge is even more extreme. Good overtaking opportunities exist in La Source, in front of Les Combes, in the double left-hand turn, on the Fagnes passage and in the chicane before the start and finish. The tarmac provides outstanding grip which is why slicks even work well when the track is slightly damp. In 2012, I celebrated my third sports car victory on this track with my team-mates."