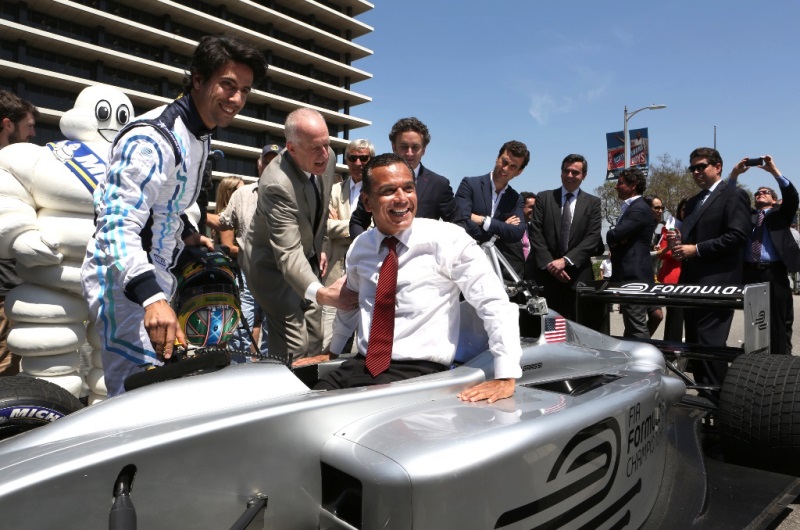 Formula E is a new FIA championship that brings electric vehicle racing to the people, as city centers around the world play host to an electric energy World Championship designed to promote interest and investment in electric vehicles and sustainable motoring.

Los Angeles was selected to host one of the races by Championship promoters Formula E Holdings in part due to its robust and burgeoning electric vehicle infrastructure, in particular Los Angeles Department of Water and Power’s (LADWP) Electric Vehicle Program. Additional cities already chosen to host races include Miami; London and Rome in Europe; Beijing and Putrajaya in Asia; and, Buenos Aires and Rio de Janiero in South America, with two locations to be announced.

"By hosting Formula E Championship races here, we ensure our place as a leader in the charge to generate awareness for electric vehicles and their benefits," Mayor Villaraigosa said. "By selecting Los Angeles as the site of their Championship races, Formula E Holdings brings international attention to our City’s electric vehicle infrastructure programs and increased tourism revenue to our City."

To date, the City has made significant advancements to prepare for and encourage the wider use of electric vehicles. Los Angeles has upgraded or installed 121 public electric vehicle charging stations, streamlined the permitting process necessary to upgrade electrical panels in homes and businesses, and issued rebates for in-home electric charger equipment and installation fees as part of their ‘Charge Up LA’ program.

"We are very thankful to the Mayor and the authorities for the enthusiastic welcome they have given our Championship and are honored to have Los Angeles on board to host Formula E and share our passion for promoting sustainable motoring," said Alejandro Agag, CEO of Formula E Holdings. "Los Angeles’ iconic landmarks provide a perfect backdrop to bring to life the excitement of Formula E racing, while at the same time, inspiring people to believe in the electric vehicle for their own personal use. The LA race is also going to have a real positive impact on the City by creating many new job opportunities together with considerable amounts in visitor spending and of course a great sense of community pride."

The Los Angeles Formula E race is planned to take place on city streets in downtown LA although a number of routes are still being considered. Ten teams with two drivers each will participate in the races, which last approximately one hour using fully electric cars capable of reaching speeds of more than 140mph (220kph) with zero emissions.

"Los Angeles is the car capital of the world, and it’s fast becoming the EV capital of the world," Ron Nichols, LADWP General Manager, added. "We are very excited to have the Formula E Championship here and to showcase the city’s achievements in expanding EV charging infrastructure and promoting EV use among our customers."

04/22/13 Formula E, the electric-powered racing series, today announced it will race in L.A. in the fall of '14. The series, which will debut next year, is covering the cost of the race and will work with the Grand Prix Association of Long Beach to put up fencing, walls and infrastructure for the event. The series is looking at two potential courses for the race and will finalize the course and date of the race by December, Formula E CEO Alejandro Agag said.