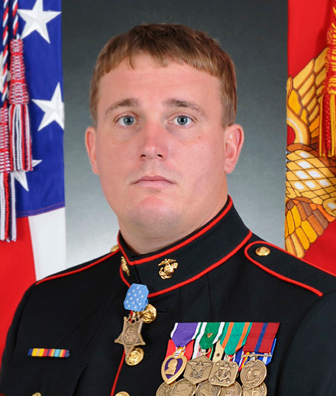 Medal of Honor recipient Dakota Meyer will serve as Grand Marshal for the 39th Annual Toyota Grand Prix of Long Beach on Sunday, April 21, saying the most famous words in auto racing – “Drivers, start your engines!" – just prior to the start of the featured IZOD IndyCar Series race.

Meyer is a former U.S. Marine who received the Medal of Honor for his 2009 actions in Afghanistan. He also will drive in Saturday’s Toyota Pro/Celebrity Race, one of seven racing events set to run during the famous Long Beach, Calif. weekend.

Since receiving the Medal of Honor, Meyer wrote Into the Fire: A Firsthand Account of the Most Extraordinary Battle in the Afghan War and fundraises with the Marine Corps Scholarship Foundation. Most recently, Meyer has partnered with the U.S. Chamber of Commerce and Toyota for the Hiring Our Heroes program.

“We are extremely honored to have Dakota Meyer serve as Grand Marshal for the Toyota Grand Prix, an event that draws thousands of visitors who will have the opportunity to honor his service to our country," said Jim Michaelian, president and CEO of the Grand Prix Association of Long Beach. “The Grand Prix Association has a long tradition of honoring those who serve in the military, and we are pleased to have a Medal of Honor recipient represent this year’s race."

Tickets for the 2013 Toyota Grand Prix of Long Beach are available now at www.gplb.com. Fans can select their seats, parking and paddock passes on the website or by calling the toll-free ticket hotline, (888) 82-SPEED. Also featured on gplb.com is the latest Toyota Grand Prix of Long Beach news, a downloadable ticket brochure and racetrack information, photos and ongoing announcements of special race week activities.

Ticket prices range from $54 for a Sunday General Admission ticket to $130 for a three-day ticket that includes Sat./Sun. reserved seating in grandstand upper levels. A wide variety of Hospitality Club packages are also available.