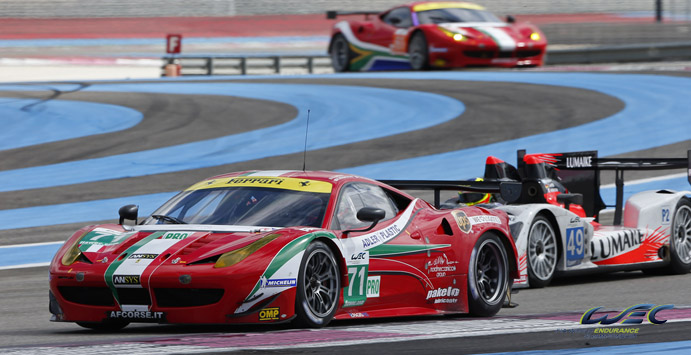 The second and final day of pre-season testing for the FIA World Endurance Championship (WEC) drew to a close this afternoon at Le Castellet amid bright sunshine and in front of thousands of spectators.

Although the morning started damp after overnight rain, there was plenty of opportunity for teams to fully familiarize drivers with their cars and fine-tune set up during the morning and afternoon sessions. The quickest times of all five sessions were set this afternoon in three of the four classes. The only incidents of note concerned the No.76 IMSA Performance Matmut Porsche which stopped with an engine problem an hour before the end of the final session, and the No.25 Delta-ADR which went off track – suspension damage preventing further action.

Current LMP1 Privateer Champions Rebellion Racing ended the final session as it had begun – at the top of the time sheets, a place it held in each of the five sessions. Neel Jani set the fastest lap of the two days in the afternoon session, lapping the Paul Ricard circuit in his No.12 Lola Toyota in a time of 1:43.521. The Swiss team was half a second ahead of Britain’s Strakka Racing, with Danny Watts' lap of 1:44.041 this morning representing the HPD ARX 03c’s best of the two days.

The fastest of the eight LMP2 cars was the No.35 OAK Racing Morgan-Nissan with a lap of 1:47.398, again set in the afternoon session of the second day. In this tightly-contested class, Bertrand Baguette just edged out his French team mate Olivier Pla in the No.24 OAK Racing entry by two tenths of a second, and the No.25 Delta-ADR Oreca O3 Nissan by three tenths. LMP2 promises to be a thrilling battle from start to finish.

In LMGTE Pro, the final 3-hour session of the test ended with Giancarlo Fisichella in the No.71 AF Corse setting a fastest lap of 1:58.790, the Ferrari 458 Italia being 0.6 seconds faster than the No.91 Porsche AG Team Manthey Porsche 911 RSR this morning and 0.8 seconds ahead this afternoon.

Three of the LMGTE Am entrants elected not to run today: Larbre Competition’s Corvette C6-ZR1, IMSA Performance Matmut's No.67 Porsche 911 GT3 RSR and the No.77 Proton Competition Porsche. Of those remaining, new LMGTE team 8Star Motorsport today set the bar with a time of 1:59.455, ahead of the No.61 AF Corse Ferrari by just 0.075 seconds although the Italian car retained the fastest lap of the two days with a 1:59.422 set by Matt Griffin yesterday.

The 20 cars present in France now return to their individual bases to make their final preparations before heading to Silverstone in the UK with the remainder of the 35-strong entry for the first round of the championship on 12-14 April. Practice for the 6 Hours of Silverstone gets underway on Friday 12 April at Silverstone in the UK, and the race starts at 12 noon on Sunday 14 April.