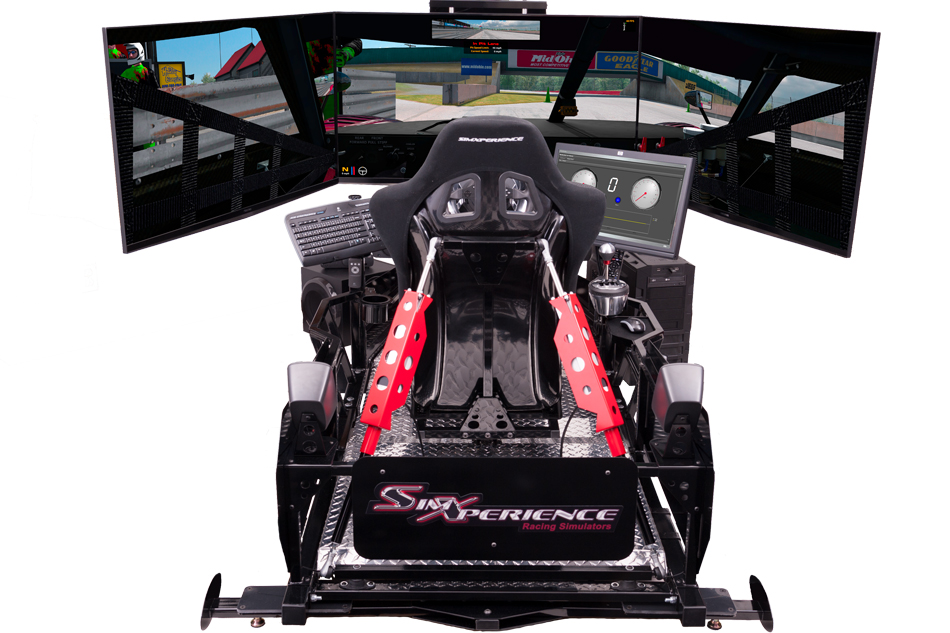 Indianapolis, IN – RaceCraft 1, a top racer development and training program headquartered in Indianapolis, today announced that the company, already a training facility for IndyCar drivers such as Josef Newgarden, has become an official dealer for the SimXperience line of racing simulators and Ultraforce Simulations G-seats.

"Becoming an official dealer for SimXperience and Ultraforce is the first step in our plan for transforming RaceCraft 1 into a completely unique center of technical innovation in racer and race engineer training," says Kelly Jones, principal of RaceCraft 1 and a former F-16 pilot, mission commander, and instructor with ten years of experience and more than 2200 flight hours.

"Our training techniques are modeled after decades of rigorous, field-proven US Air Force methods that I used to train and evaluate fellow combat fighter pilots. And the development of racing simulators has reached the stage where we can offer that same level of training to racers. The benefits are both operational and financial. RaceCraft 1 training costs a small fraction of the expense of putting a car on track. And at RaceCraft 1, we can provide any type of car, track, weather, time of day or night, and car setup. We take that regimen and tailor it to the racer’s current skill and experience level, then train to build and maintain the racer’s best response as second nature."

The first customer for the top-of-the-line package of the SimXperience Stage 5 Pro Racing Simulator equipped with an Ultraforce GS-4 G-seat – scheduled to be delivered to the all-new RaceCraft 1 facility on March 25 – is a rising young karting star, Davin Foster. Later this year Davin will make the transition from karts to open-wheel cars.

"My ultimate goal is to race in Formula One, and everyone there uses simulators for training and testing," says the 15 year-old, whose father is, appropriately enough, a software engineer. "On the advice of Kelly Jones, who has been very professional and straightforward with us, and after long talks with my mother and father, both of whom have put a tremendous amount of effort into my career, I agree that learning as much as I can on a simulator before I get in a car for the first time is the smart move, which is why we're buying it and having it installed in our house. I'm going to spend every minute I can between now and then learning the car, the tracks and the setups. I expect that will put me ahead of everyone else the first time I get in a race car, and that's the goal of every driver."

And the simulator the family has purchased for his training is admirably suited to the task. The SimXperience Stage 5 Pro features three 47-inch HDTVs, a 22-inch touchscreen, and is pre-reconfigured with both iRacing and rFactor2. The unit features motorized pedals and monitor adjustment, advanced Force Feedback Steering with quick-release GT and Formula wheels, sequential and H-pattern gearshift, Tilton pedals with Wilwood hydraulics, and a full Sim Vibe complement.

The other major component that makes the whole experience as accurate as possible is the Ultraforce GS-4 G-seat provides realistic motion feedback to the driver. Unlike other motion systems such as motion platforms, the GS-4 can produce strong sustained motion feedback through use of movable panels that apply pressure directly to the body of the driver. Also, unlike most other motion simulators, the GS-4 responds to all up/down, side-to-side, and forward/backward G-forces that occur in the simulation. Almost any motion cue a driver feels in a real car can be conveyed by a GS-4. The Ultraforce GS-4 can be easily added to existing simulators as a replacement to a static racing seat.

"The RaceCraft 1 business and training model that Kelly Jones had created makes a lot of sense to us, and we're looking forward to working with him both as a dealer and in the development and beta testing of new innovations in racing simulator software," says Kevin Villers, General Manager of SimXperience. "Our simulators are so good at training both mental memory of track layouts and muscle and skeletal memory of driving a car on those tracks that, when the driver gets in the car for the first time, the transition is seamless. We build our simulators in a modular design that starts at around $2,200 and you can add elements until you get to the top-of-the-line SimXperience Stage 5 Pro model at about $22,500, fully assembled with an on-site technician to get things up and running smoothly."

“It is deeply gratifying that Davin Foster and his family have chosen the Ultraforce GS-4 G-Seat to help propel his racing career to the next level," says Pat Dotson, owner of Ultraforce Simulations. “The GS-4 provides unrivaled high-fidelity motion cues that help develop car control skills in a simulation environment. The professional training provided by RaceCraft 1 combined with the Ultraforce GS-4 is sure to prepare Davin for the racing challenges he will face in the future."

To best serve Davin Foster and future clients, RaceCraft 1 principal Kelly Jones and UltraForce Simulations president Pat Dotson will visit the SimXperience facility in Canton, Ohio to participate in dealer/affiliate training on March 19. The completed unit will be delivered to the RaceCraft 1 facility on March 25 and new owner/driver Davin Foster and his parents, William Foster and Robin Scott, are scheduled for training at RaceCraft 1 March 29-31.