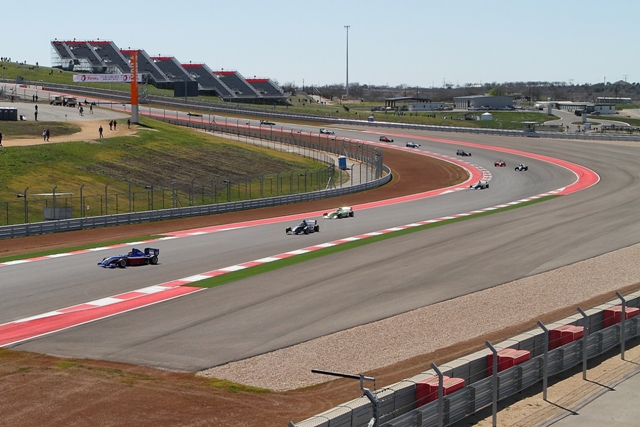 Matthew Brabham was disappointed to finish third in yesterday’s opening round of the Pro Mazda Championship Presented by Cooper Tires at the Circuit of The Americas, especially after setting the pace consistently during pre-season testing. Last year’s winner of the Cooper Tires USF2000 Championship Powered by Mazda more than made amends in this afternoon’s Round 2, run over 12 laps on the 20-turn, 3.41-mile road course, sweeping from third to first at the drop of the green flag and never being seriously challenged.

Brabham, from Manalapan, Fla., found the perfect way to celebrate his 19th birthday earlier in the week by stretching out a huge lead once the race was finally underway after a melee at the exit of Turn One caused the first couple of laps to be run behind the Pace Car. The #83 Team Andretti Autosport driver stretched out an advantage of almost eight seconds by Lap 7, and even though that was negated by another full-course caution after Colombian Juan Piedrahita had an incident at Turn 15 in the #9 Petrosur/Sisolec/GFK Motors/Red Line Oil entry run by JDC MotorSports, Brabham kept his wits about him and eased clear again over the final three laps to take the checkered flag 4.771 seconds clear of his nearest challenger.

An unfortunate incident at the first corner on the opening lap accounted for yesterday’s second-place finisher Spencer Pigot, retiring on the spot with extensive damage to his #81 Doug Mockett & Company/Gap Guard/Parathyroid.com/California Scents/OMP-Team Pelfrey car. His teammate Petri Suvanto (#82 GapGuard.com) also was involved in the incident, but was able to continue at the back of the pack. More on him shortly.

Brabham’s teammate, Shelby Blackstock (#28 Starstruck) was in second place after the melee had been cleared up, despite having started in eighth, and the Nashville, Tenn., native maintained that place until soon after the final restart, when yesterday’s winner, Diego Ferreira, found a way past and was able to secure his runner-up placing – and the championship lead – in the closing stages.

Blackstock, whose mother, country singing star Reba McIntyre, was in attendance – having watched Shelby also run among the top five in the Continental Tire Sports Car Challenge race earlier in the day – held on for a fine third, just ahead of Scott Anderson (#44 Neuropathy Testing Center/Laser Nail Centers/OtterCares/Sparco/Bell-Juncos Racing), from Fort Collins, Colo., and, incredibly, Suvanto, who restarted last and drove a magnificent race through the pack to displace Kyle Kaiser (#18 InterVision/NetApp/Juniper Networks/Riverbed-World Speed Motorsports) from fifth place on Lap 11.

Ferreira leads Brabham by 58 points to 54 after two rounds in the 16-race season, while Blackstock, Anderson and Suvanto are all tied on 34 points as the series heads to Florida, for Rounds 3 and 4, held in support of the Honda Grand Prix of St. Petersburg on March 23/24.

Contingency awards included the Staubli and PFC awards issued to the winner and winning team, and the Quartermaster Hard Charger Award for most positions gained which went to Suvanto, who advanced nine places.

Matthew Brabham, #83 Team Andretti Autosport (Andretti Autosport) – First: “It feels awesome to get the win. I can’t describe the feeling. Finishing third yesterday just made me a little bit more hungry for today. We managed to get the speed that we had all through testing back in this race and it definitely helped. The car was really, really good. I knew straight away, and that gave me a lot more confidence to get everything right. I was lucky in the first corner that all was well. I don’t know what happened on the outside, but we managed to slip through and get out in front."

Diego Ferreira, #57 Team Vi5o Venezuela/Mindeporte (Juncos Racing) – Second: “It was a pretty difficult race. I made a mistake at the start and Matthew [Brabham] made a move and passed me. I fell back to fourth. I was fighting with the car a bit because yesterday we had new tires and today we had used tires, but it was okay. I managed to get up into second and I am happy. [On leading the points] For sure this is the plan for the whole year and I will work hard to stay there."

Shelby Blackstock, #28 Team Starstruck (Andretti Autosport) – Third: “I had a really good start and the race was going well. Unfortunately, I made a mistake towards the end of the race and Diego [Ferreira] was able to get by. That happens in racing but I definitely learned a lot. I want to thank Mazda, Cooper Tires, the Circuit of The Americas and everyone else involved."

Jeff Garibotti (Garibotti Racing) – First (Expert Class): “I definitely drove more aggressively today and the car was fantastic; no complaints at all. This experience has been just incredible – the facility, the people, everything. It couldn’t be more perfect. I belong to Autobahn Country Club and I used to race in the Spec Miata series there. I can’t wait to go back to that track and put some of these new skills to work and see what kind of lap times I can do"