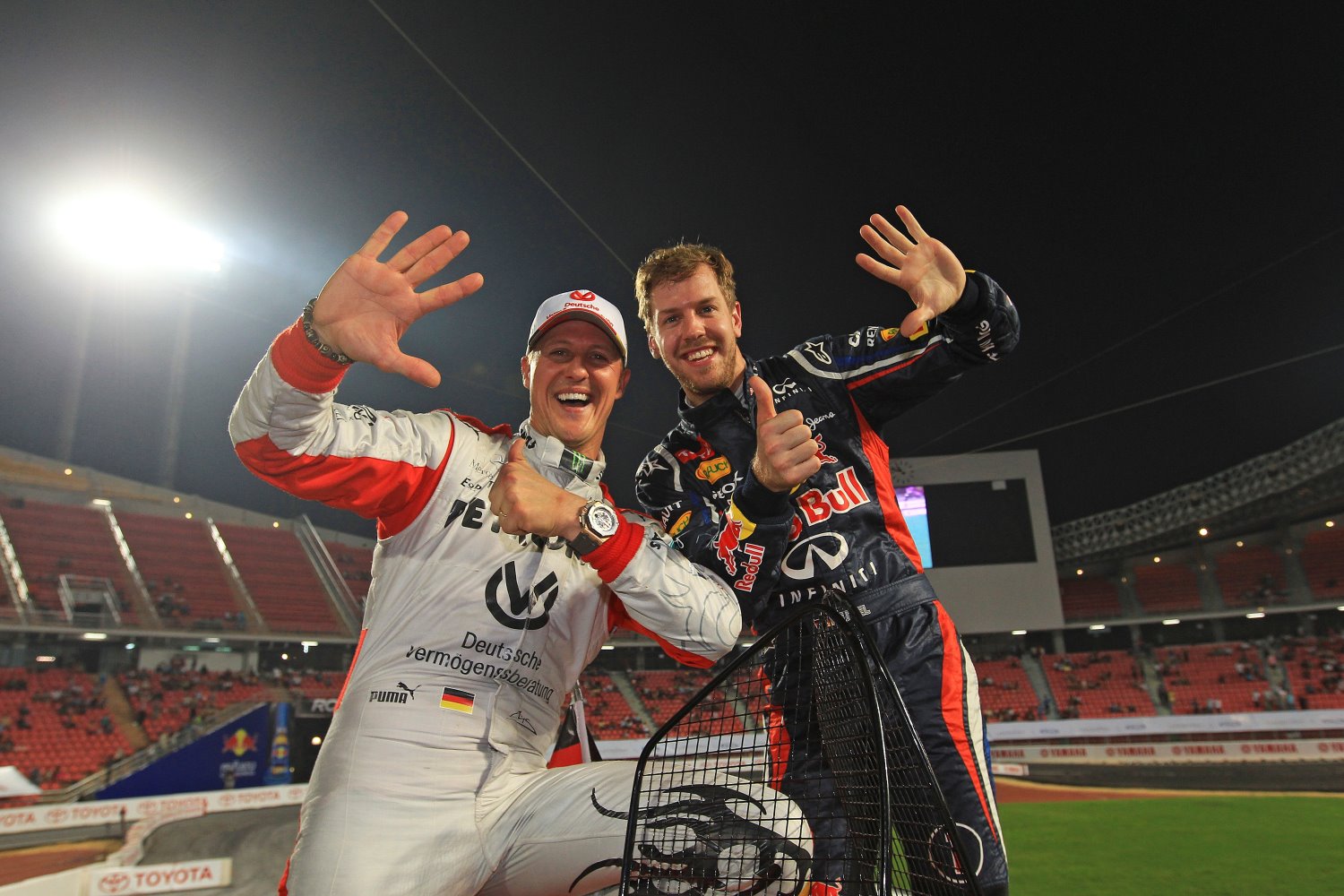 UPDATE Added photo of the winning team below. It is no fluke that they have won the team competition for six, count them six, straight years. Michael Schumacher and Sebastian Vettel are the two best drivers in the world.

On another hot evening in the Thai capital, legends from many of the world's biggest motor sport series teamed up in pairs to battle for national pride. They raced a mix of cars – including the Audi R8 LMS, VW Scirocco, Lamborghini Gallardo Super Trofeo and the Toyota GT86 – on a purpose-built parallel track at the Rajamangala Stadium.

To cap off a busy night of action, Schumacher and Vettel prevailed in the Grand Final against Team France's Sébastien Ogier and Romain Grosjean. First Schumacher defeated Grosjean then Vettel beat rally ace Ogier in the 'battle of the Sebs'.

The result meant that the German duo took an incredible ten wins out of ten on the night, matching their combined total of F1 world championships. They have now extended their record of ROC Nations Cup titles to six in a row too.

Schumacher said: “This is a historic day. It was already very special to win five times in a row but this new record just feels great. The Race Of Champions is a nice event with a nice set-up, there are great guys here and tough competition. We were pretty scared of the guys on Team France but in the end they lost time in the final heats so we were lucky to be consistent the whole way through."

Vettel added: “Even Michael hasn’t managed six titles in a row before so this is something special. Six years is a long time and now we can look back and know we’ve won for the last six years. We all love coming here as it’s a special event. It’s a privilege and an honor to race with these guys. There’s one thing that connects us all, which is racing. Now I can look forward to tomorrow and hopefully stay in the competition as long as possible. I’ve tried that for the last five years and haven’t succeeded yet so it would be nice to put my name on that trophy too."

Grosjean admitted: “We knew going up against Team Germany was the toughest moment of the evening. But we fought as well as we could with what we had in our hands. Last year we reached the semi-final, this year the final. Now the next step is to be on the top of the podium. They want to go for seven next year but we want to go for our first one in the future. For now it’s great to have brought the blue, white and red flag to the final."

Reigning individual Champion of Champions Ogier said: “First I want to congratulate Team Germany because six victories in a row is a great result. We tried our best but they were very strong. We will try to do better next time. First I will do my best to retain the individual Race Of Champions title tomorrow but I know it will be tough."

In the semi-finals Team Germany beat Team Australia's Jamie Whincup and Mick Doohan by two heats to nil. They had earlier sailed through their Group B with six wins out of six to kick off their perfect night. Team Australia joined them in the semi-finals with three victories: two for Whincup, one for Doohan.

Following their triumph in yesterday's ROC Asia, Team India's Narain Karthikeyan and Karun Chandhok failed to make it beyond the group stages this time. They took a win apiece but it wasn't enough against the might of Germany and Australia.

Host nation Team Thailand (Nattavude Charoensukawattana and Tin Sritrai) fought hard but they were unable to progress beyond the group stages. Sritrai nonetheless gave the home fans something to cheer with victory over Doohan.

Earlier in the evening, Team France (four wins) and Team All Stars (three wins) both progressed through the round-robin Group A to line up a best-of-three semi-final. Lorenzo memorably proved his two-wheeled skill extends to four wheels by defeating touring car great Andy Priaulx in one of the heats.

Team Americas were unlucky to miss out on qualification on countback of fastest times as they also ended up with three wins courtesy of Benito Guerra (2) and Ryan Hunter-Reay (1). Team Great Britain (Priaulx and David Coulthard) missed a semi-final spot after both fell foul of penalties for touching the barriers – though they still took one win each.

There is plenty more action to come in Bangkok on Sunday as the drivers will put their friendships aside and go it alone in the individual Race Of Champions.

Coverage of tomorrow's finale will be available on television all over the world. Stations showing ROC live include SAT1 in Germany, Motors TV around Europe, Al Jazeera in the Middle East, Fox in Latin America and Brazil, Speed TV in Australia, the Sony Entertainment Network in India, PPTV and Euro Soccer channel in China, Super Sport in Africa plus many more. Please check local listings for exact details of broadcast times.