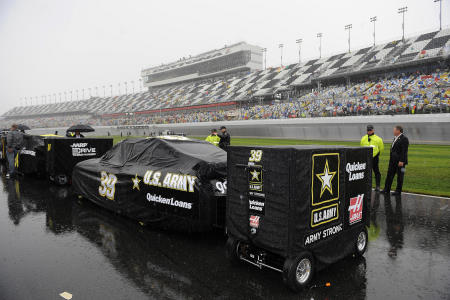 The 53-year-old grandstands, restrooms and other fan areas of Daytona Int'l Speedway “appear destined for demolition as the Speedway moves forward on a planned major renovation and expansion of its entertainment complex," according to Dinah Voyles Pulver of the Daytona Beach NEWS-JOURNAL. Documents from the St. Johns River Water Management District note that the “frontstretch grandstands — built when the Speedway opened in 1959 — would be ‘removed and reconstructed.’"

The plans “spell out a reconstruction project for 108 acres along International Speedway Boulevard to revamp the way rainfall is managed and improve the treatment of stormwater." The documents also “note new fan entrance areas, parking spaces along the grandstands, and other changes, including the grandstand demolition and replacement, which would be spaced over several years."

DIS announced the renovation early last summer, but specific details “have been slow to emerge." DIS Senior PR Dir Lenny Santiago yesterday said that the slow release of details is “because the design is not yet finalized and in part because the proposal won't go to senior executives and the board of parent company International Speedway Corp. until sometime later next year."

He added that DIS officials are "putting together a plan for what the property is 'going to look like for the next 50 years.'" Santiago said, "For us, this could potentially be a great opportunity to modernize various elements that need it." The original site plan filed with the city said that an “additional 150,000 seats could be added as part of the master redevelopment." But Santiago yesterday said that DIS “hasn't finalized the number yet." Daytona Beach News-Journal