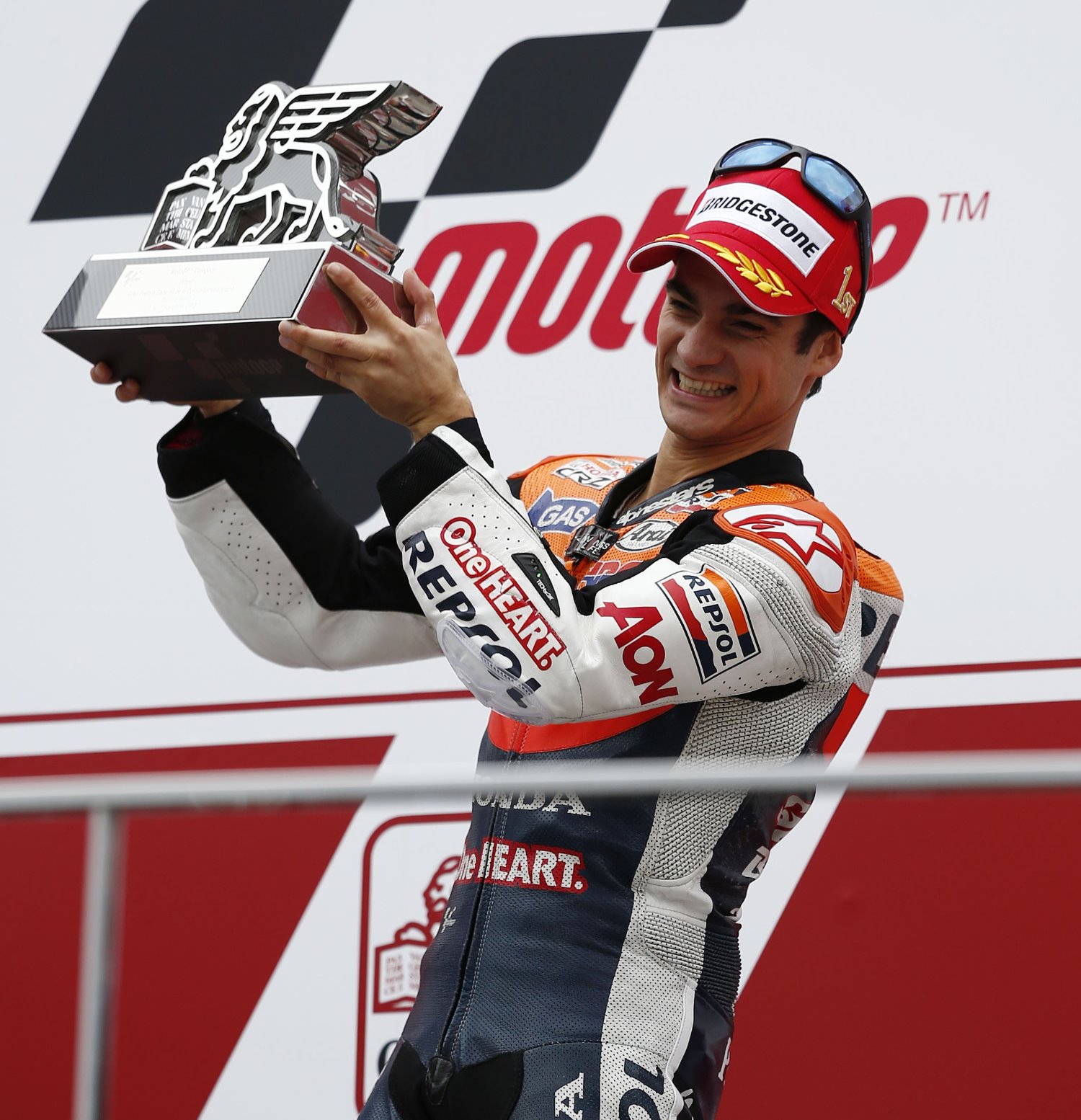 In the final MotoGP race at the Gran Premio Generali de la Comunitat Valenciana it was Repsol Honda Team’s Dani Pedrosa who took victory in a dramatic race that was marred with awkward conditions and crashes ahead of Katsuyuki Nakasuga and Casey Stoner.

The race was declared wet by Race Direction despite a near dry line having formed, and only Yamaha Factory Racing’s Jorge Lorenzo, his teammate Nakasuga, and LCR Honda MotoGP’s Stefan Bradl, chose the softer option slick tires, with all others on the hard wets. However, in a twist unseen this season, Pedrosa, Ducati Team’s Nicky Hayden, Monster Yamaha Tech 3’s Cal Crutchlow and San Carlo Honda Gresini’s Ã�lvaro Bautista then decided to start from pit-lane after their sighting lap, with all of them switching to a bike with slick tires.

Pedrosa was carving his way through the pack, whilst many riders that were on wets started coming into the pits to switch to their bikes with slicks, amongst which were Repsol Honda’s Casey Stoner, Pramac Racing Team’s Hector BarberÃ¡, and Tech 3’s Andrea Dovizioso.

Amid the frantic happenings, Hayden, Avintia Blusens’ Ivan Silva, and Speed Master’s Roberto Rolfo crashed out of contention. On lap eight, Lorenzo was leading with Pedrosa in tow, whilst Bradl was running third with Nakasuga and Crutchlow behind. It was however not to be for the young German as he lost control of his bike in Turn 5 and crashed out. With 18 laps remaining Crutchlow efforts were rewarded by getting past Nakasuga, as Pedrosa had a moment and ran wide, putting him over three seconds back on Lorenzo.

Then there was huge drama as the World Champion was highsided off his bike as he was passing back markers, and was fortunate to walk away unhurt. This left Pedrosa in the lead, who also had his work cut out getting past the slower riders. On lap 19 the crashes continued as BarberÃ¡ also took a tumble, whilst Espargaro teammate Randy de Puniet ran into the gravel. A lap later he was followed Avintia Blusens’ Claudio Corti, who skidded off into the gravel on his Inmotec chassis.

Just as things looked to have settled down, Crutchlow was caught out by the conditions and dropped out of second place. This moved Bautista up into third, although Stoner was catching up quickly in fourth. And with three laps remaining Stoner was all over the rear wheel Bautista and caught him at the end of the lap down the home straight to move into third.

In the end it was Pedrosa who took checkered flag to score his seventh win of the season, with Nakasuga taking the first Japanese podium this year in his second wildcard entry, and Stoner signing off his GP career with the final step on the rostrum. The first non-podium finisher was Bautista, followed by his teammate Michele Pirro, Dovizioso, Cardion AB Racing’s Karel Abraham, Came IodaRacing Project’s Danilo Petrucci, Paul Bird Motorsport’s James Ellison and Ducati’s Valentino Rossi. EspargaroÂ¢ finished in 11th and secured himself the CRT title this season, whilst Bautista consolidated fifth in the championship.