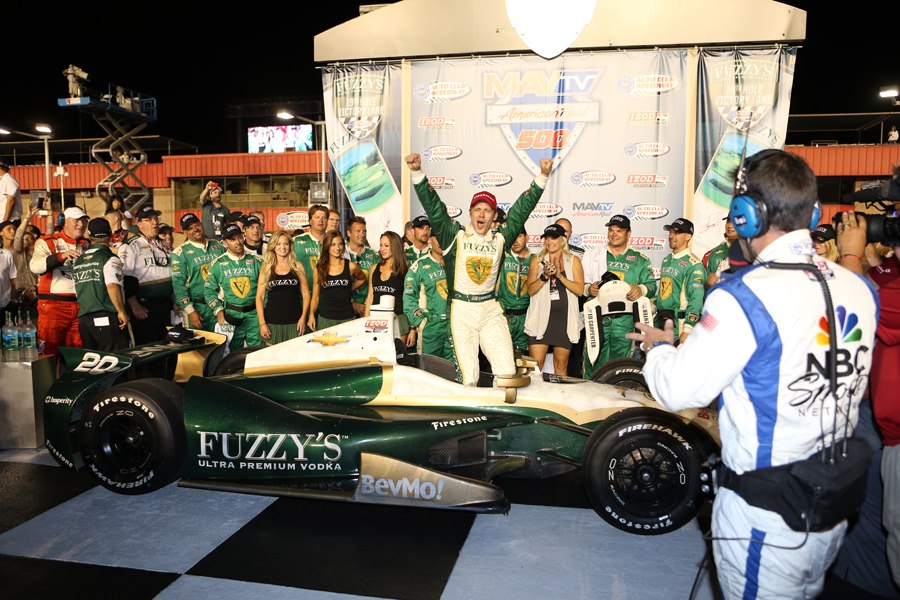 Ed Carpenter Racing celebrated its first anniversary in the IZOD IndyCar Series this week and much has occurred since the team’s initial press conference last November at the Indianapolis Motor Speedway.

Owner/driver Ed Carpenter established a solid first-year program that culminated with a sensational last-lap victory in the season finale’s MAVTV500, at the Auto Club Speedway on Sept. 15.

Carpenter and contingent of veterans fought off the bigger, established teams of Andretti, Ganassi, Penske and others to capture the coveted 500-mile contest in the No. 20 Fuzzy’s Ultra Premium Vodka Chevy on the fast Fontana two-mile oval.

“It is hard to believe it has been one year since we started Ed Carpenter Racing with the association with Fuzzy’s Ultra Premium Vodka," said Carpenter. “It is like whirlwind in the 12 months. But I’m so pleased and proud of our new organization and the development of the Fuzzy’s team."

Carpenter’s struggles as an owner as well as a driver in 2012 gave the 31-year-old Butler University marketing graduate an appreciation for the hard work put in behind the scenes in addition to the on-track racing.

“Just to win in the IZOD IndyCar Series is very difficult," he said. “But to win a race in the team’s very first year is quite an achievement. Winning at Fontana in the season finale was a great feeling for a brand new team that just started last November. We had great companies like Fuzzy’s Vodka and Chevrolet on our side too. That was a big advantage this year."

Carpenter utilized a mixture of racing veterans from other teams with longtime motorsports executive Derrick Walker leading the squad from the ground up starting late last year. Walker brought in Tim Broyles (team manager) and Bret Schmitt (chief mechanic) to formulate the organization.

“I feel the Ed Carpenter Racing/Fuzzy’s Vodka Chevy team stuck together through the ups and downs of the first year," said Carpenter. “The 500-mile win at Fontana is a tribute to the team’s hard work all year. It’s something that’s extremely hard to do, win in this series anywhere. To do it as a new team is pretty special."

Carpenter, Walker, Broyles and Schmitt knew the task to be competitive would be enormous in the team’s “rookie" season. No testing until March put the team in a “catch-up" mode immediately.

“Going into this season with the new car as a single-car team, there was a lot of catching up to do and the multiple car teams had an advantage," Carpenter explained. “So we were pretty much on our own. To be honest, I never really thought about the owner-driver element of our program until somebody mentioned after the Fontana win.

“At the track, I really don’t think of myself as an owner, only a driver. I just try to continue to do my same routine as a driver. I try to keep the owner stuff to the weekdays when we’re not at the racetrack. Having people like Derrick, Tim and Bret behind the scenes helping our team produce a solid team effort is a big deal for me. We couldn’t have done it without all of those people on the ECR/Fuzzy’s team."

Walker’s expertise was a key to Ed Carpenter Racing getting off on a proper step for a first-year team and Carpenter expressed that feeling on a weekly basis.

“We wouldn’t be here without Derrick," admits Ed. “His thumbprint is all over our team. Tim is the team manager and he called the strategy all year long with Derrick’s guidance at times. More than anything, Derrick likes to refer to himself as the rudder of the team. I would call him an architect of helping shape us here in year one."

“We were good on the ovals at nearly every race this year," said Carpenter. “At Indy, we came from 28th to third with 20 laps to go. A part failure hurt us late in that one. And we worked hard to prepare for Fontana. That was our goal after Iowa. We had a car to win at Iowa but we had a few problems in the race. So we worked hard to get ready for the finale. It feels so good to win a race after studying so hard and preparing for all of the aspects of a 500-mile race."

While Carpenter expected his team to be strong on the ovals, he was pleased with the direction of team’s road and street circuit settings throughout the year.

“We were able to make progress with our road and street setups," he said. “I think I’ve gotten better, but it’s just the competition is much better too. We have Matt, Brent, and Lee working with me to develop our road racing program.

It is always fun seeing a young guy like Matt Barnes get a chance to develop as a race engineer. Sometimes you get those young engineers and they’ve worked as assistants for so long. They have so much drive and desire to be a race engineer. It’s amazing what they can do."

Carpenter and his EC/Fuzzy’s crew have not rested on their Fontana victory either. The team has been hard at work developing new programs with the DW12 chassis.

“Now, our team’s goals for 2013 are to keep improving," said Carpenter. “It’s hard to win in this series, yet we won this year. Winning is always going to be the goal and winning the Indy 500 is one of the main goals. We have won a 500-mile race now and we want the Brickyard victory badly.

“However, we think we really can improve a little bit more all-around and become more consistent. There were times when I wasn’t as good as I needed to be and there were times that we made other mistakes as a unit.

“We seemed to get better all-around and we need to limit our mistakes. Hopefully we’ll find our way into becoming a ‘top ten in the championship’ kind of team. I think that’s really the next step is being a little stronger in the points, not just the oval championship side. Then we will be able to grow as a team."

Ed Carpenter Racing’s initial year is now complete and standing in the victory lane at Fontana made it a very special anniversary this week.