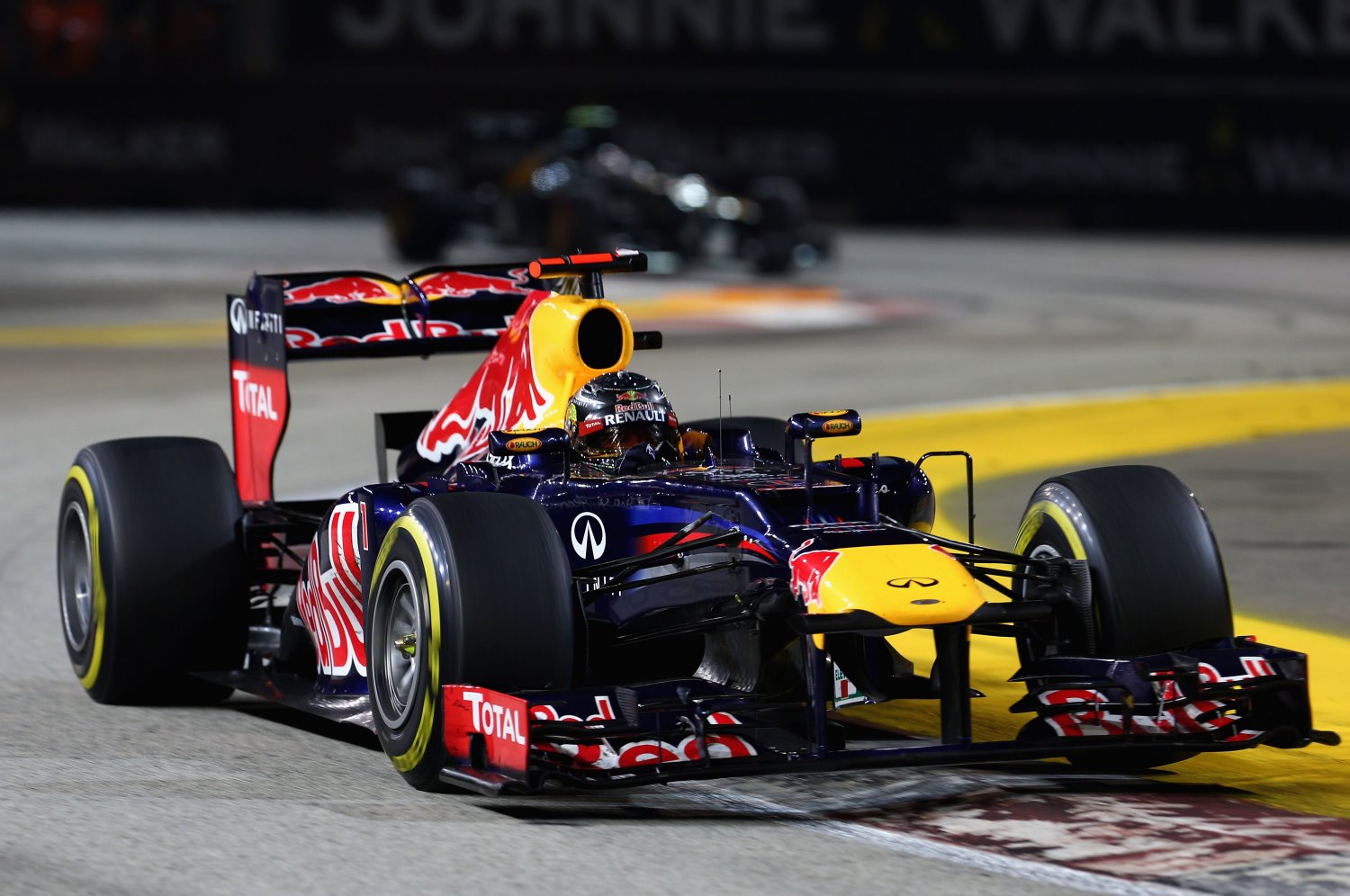 After the Red Bull driver beat McLaren's Jenson Button to the checkered flag, FIA officials looked into whether he 'brake tested' his British rival whilst behind the safety car.

"It was not intentional," the German insisted.

"You try to warm up your tires and also try to keep the brakes at the right temperature. So it was possible that he (Button) was looking at his steering wheel and I was braking a bit abruptly and then you almost meet at a spot where you both would not want to be.

Button also admitted that the new championship standings runner-up did not 'brake test' him.

"I don't think it was a brake test," said Button, "because Sebastian is not a stupid driver, he knows if he brake tests me we are going to crash.

"I was not trying to get him penalized, I was just looking for clarification of where we are."

But after another stewards investigation late on Sunday, the FIA will push Michael Schumacher ten places down the Suzuka grid early next month.

Also because the 43-year-old German was involved in a similar rear-ending crash with Bruno Senna earlier this season in Barcelona, Schumacher's punishment is for smashing Jean-Eric Vergne out of the race.

"I have to accept that," German reports quote Schumacher as saying, despite earlier hinting at a possible technical problem.

Toro Rosso's Vergne told RMC Sport: "He (Schumacher) told me he was sorry and that it was his fault."

The Kolner Express tabloid newspaper wondered: "What was that, Schumi? Nodding off in the night?"

And Mark Webber was stripped of his championship point, for leaving the track during his pass on Sauber's Kamui Kobayashi.

Schumacher 'in the toilet' for Watkins tribute
(GMM) Michael Schumacher was notably absent as the world of formula one stopped for a minute's silence ahead of the Singapore grand prix.

The silence was to honor the sport's late doctor, Professor Sid Watkins, who died just under two weeks ago.

Asked about his absence for the tribute, seven time world champion Schumacher told German RTL television: "I have to apologize, as I was still in the toilet.

"My thoughts were with Sid," he added.

Schumacher, whose F1 career stretches all the way back to 1991, said he has "a lot of memories" of British neurosurgeon Watkins, "both on the professional and the personal side".

"When I had my accident in 1999 (at Silverstone), he was immediately at my side," he recalled.

Red Bull would release Buemi for 2013 race seat
(GMM) Red Bull is prepared to release Sebastien Buemi in the event the Swiss can find a way back onto the F1 grid.

Having lost his Red Bull-funded Toro Rosso race seat at the end of last year, the 23-year-old was thrown a lifeline when he became the energy drink squad's official reserve driver.

But with race seats potentially up for grabs all the way through the 2013 grid, including at Sauber and Force India and also Caterham, speculation has linked Buemi with a possible return to action.

"I don't want to always be the third driver," he is quoted by Blick newspaper.

The report said Red Bull has offered to keep Buemi on board as its reserve, test and simulator driver.

"But if he can go racing somewhere, we are not going to stand in his way."

Hockenheim ready for 2013 in case of Nurburgring demise
(GMM) Hockenheim is ready to step in at short notice, should the Nurburgring be unable to organize next year's German grand prix.

The Nurburgring has been given only a conditional date on the draft 2013 schedule, due to the circuit's well-documented financial problems.

According to the alternating scheme in place between Germany's two grand prix hosts, Hockenheim – having hosted this year's race in the country – is not officially scheduled to return to the calendar until 2014.

But with the Nurburgring grappling with its financial problems, Hockenheim chief Georg Seiler said he is open to thinking about a 2013 event "in the right financial conditions".

"At the moment, we wait," he is quoted by the DAPD news agency. "Should there be a request, we would consider it."

Seiler said he hopes the Nurburgring's race can survive.

"It would be a real shame for them, in their difficult situation, to lose the grand prix," he nobly said.

Glock says Singapore result worth EUR 10 million
(GMM) He didn't even score a point, but Timo Glock's performance in Singapore on Sunday could be worth as much as EUR 10 million.

Marussia therefore leapfrogs its green-colored rival to take the all-important tenth place in the constructors' world championship with six races still to go.

"We do of course need to hold on until the end of the season and I hope we can," said Glock.

"Over the last four months we have really closed the gap to Caterham and this is a very nice reward to everyone in the team because it has not been easy."

The 30-year-old told Bild newspaper: "This twelfth place is worth ten million euros at the moment!"

He is referring to the confidential Concorde Agreement, under which the sport's top ten teams share a lucrative prize pool.

Bild said Marussia's total budget for 2012 is only about EUR 40 million.

Glock, meanwhile, said he is staying put for now.

Best finish helps di Resta push for 'bigger team'
(GMM) Paul di Resta on Sunday admitted his best-ever formula one result in Singapore will not hurt his chances of stepping up to a better team.

Force India openly wants to keep hold of the talented Scot, but di Resta has been linked with the potentially vacant seats at the McLaren and Mercedes teams.

"I would like to think I am capable of stepping up to one of the bigger teams," he said on Sunday after finishing fourth in Singapore; his best result since debuting last year.

"But I'm not getting carried away," he is quoted by the Telegraph. "When the time is right hopefully someone will step up and give me the chance to do that because I want to be in a car that wins races week in week out."

Force India is powered by Mercedes engines, and the German carmaker played a big role in his formative career, taking him to the DTM championship in 2010.

"I have worked with manufacturer teams before and there is a big difference," said di Resta. "But my loyalties lie here for the moment so I will remain focused on the job in hand."

The 26-year-old recently split with his manager Anthony Hamilton and signed with the Jenson Button-linked stable headed by Richard Goddard.

Di Resta admits the current period of speculation is hard to deal with.

"It is what it is," he said. "It is a difficult position to be in but I have people taking care of that side of things for me. I'm happier than I ever have been with what's going on around me.

"It feels like things are clicking into place and long may that continue."

Alonso urges Ferrari to improve 'struggling' car
(GMM) Fernando Alonso has urged Ferrari to give him a better car to keep defending his diminishing lead in the world championship.

The Spaniard saw his 37-point lead become 29 on Sunday, as Red Bull's Sebastian Vettel won under the Singapore lights.

Alonso, despite going into the race weekend with high hopes, could manage just third place at the checkered flag, having qualified fifth.

"Honestly, before arriving in Singapore, I expected more," he said.

"I think we were not very competitive this weekend."

The points damage, however, would have been higher had pole sitter and runaway leader Lewis Hamilton not broken down with a gearbox failure.

"Of the four or five (championship) contenders, we lost points with one, with the other three we increased our advantage," said Alonso, looking on the bright side.

But with Red Bull and particularly McLaren fielding more competitive packages in Singapore, the 31-year-old admitted Ferrari needs to up its game.

"For sure, we need to improve the performance we saw here," Alonso said before leaving Singapore. "We struggled all weekend."

Team boss Stefano Domenicali agrees with Alonso that the Maranello based squad needs to improve the F2012.

"Having said that," said the Italian, "we mustn't overreact as it's better to bring a few updates that work rather than bringing too many."

Ever since teaming up with Michael Schumacher at the Brackley squad in 2010, the younger German has accepted the higher race number, despite always finishing higher in the previous year's points standings.

Normally, the driver best-placed in the previous year's championship gets the lower race number, but Schumacher always argued that he preferred an 'odd' number, mainly for reasons of superstition.

But Rosberg's reticence came back to bite him in Singapore this weekend, after both Mercedes cars stayed in the garage for strategic reasons during the decisive 'Q3' qualifying segment.

With lap times unable to sort out the grid places of the two silver-clad drivers, the FIA had to revert to their race numbers to divide them.

And because Schumacher wears the number 7, and Rosberg the number 8, it was the seven time world champion who lined up ahead of 27-year-old Shanghai winner Rosberg.

"Given the outcome (for the grid placings) here, I would have preferred to have the lower starting number," Rosberg is quoted by German RTL television.

"For next year, we'll have to have a look at that (situation)," he admitted.

Rosberg is currently seventh in the 2012 standings, five places ahead of Schumacher.