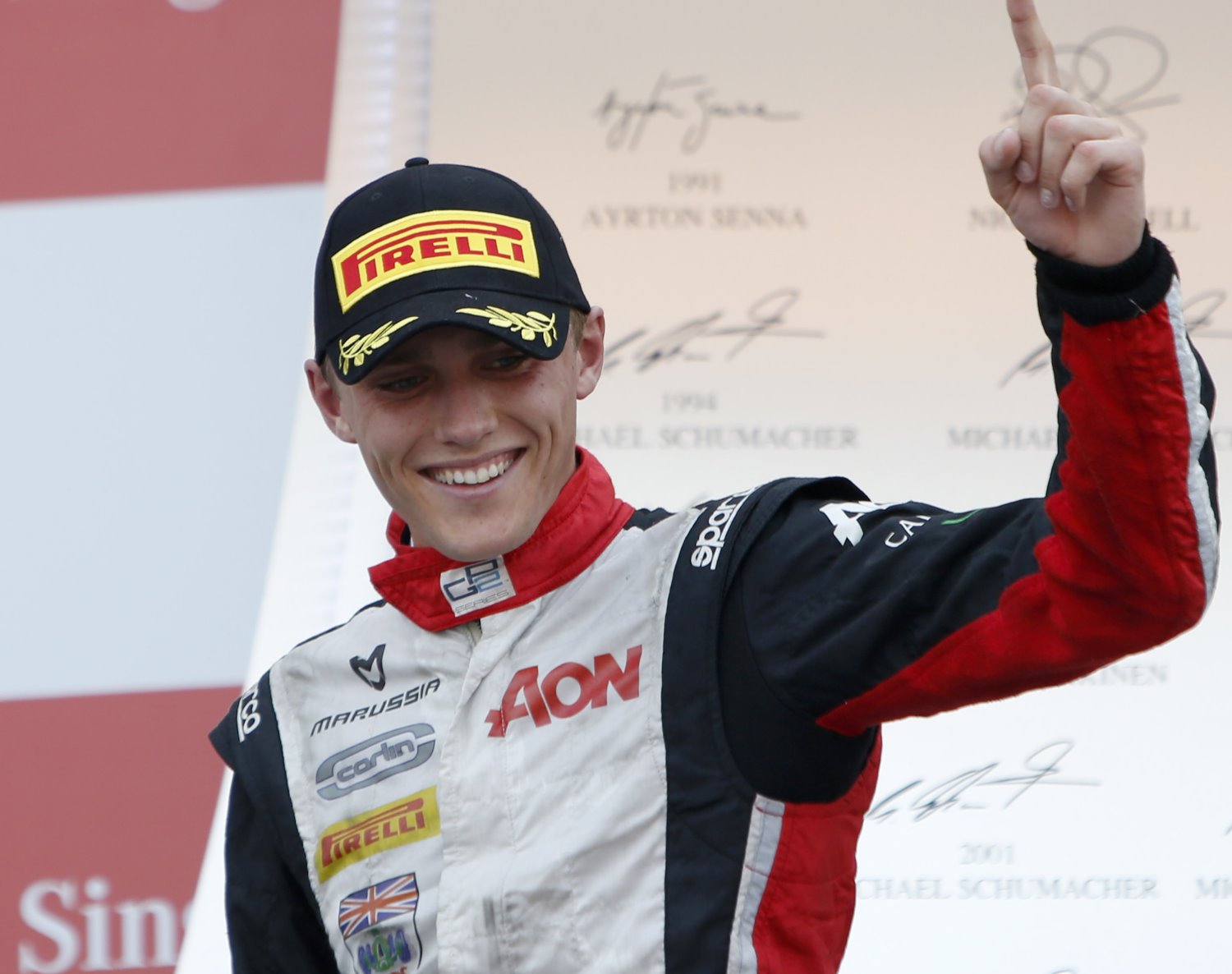 Max Chilton has claimed his second win of the season in hot and humid conditions in this afternoon's feature race in Singapore, leading home Esteban Gutierrez and Fabio Leimer, while Davide Valsecchi wrapped up the championship by running home just ahead of his title rival Luiz Razia in fourth and fifth positions.

The Englishman's win was set up at the start when poleman Luca Filippi bogged down as the lights went out, handing Chilton an easy run to the first corner ahead of Gutiérrez, Leimer and Jolyon Palmer, with Valsecchi next across the line and relieved to see the cars of Johnny Cecotto, Filippi and Stefano Coletti between him and his championship nemesis.

Gutierrez had a look up the inside at turn 3 but couldn't make it stick, giving Leimer the chance to squeeze by the Mexican at turn 7: he couldn't make it stick either, and that gave Palmer all the space he needed to blast by at the corner before the safety car came out to allow the removal of Rene Binder and Victor Guerin's stricken vehicles, and to give everyone a bit of a breather after a frantic first lap.

Chilton easily gapped his rivals at the restart, and it was clear that everyone was holding station pending the pitstops: Filippi and Cecotto were the highest placed drivers to stop when the pitlane opened on lap 6, putting the fear of being jumped into everyone's hearts. Leimer and Razia came in on the next lap, with the rest of the front runners in over the following 2 laps: with the stops shaken out Filippi had jumped back up to P3, right on the tails of Chilton and Gutierrez.

The top three had amazing pace, running like a train away from their main rivals on track as the last few stragglers finally came in for their stops. Leimer was the only other man able to compete on pace, and quickly dispatched Palmer as he looked ahead for a podium finish: his job was made easier when Filippi slowed with a mechanical gremlin, and it was only a matter of time before all of the Italian's good work was in vain.

The Swiss driver finally claimed his scalp on lap 20, with Valsecchi also looking for a way past his countryman but not wanting to risk too much, as he now had Razia on his tail and hoping for more: Filippi eventually submitted and came into the pits to let his team have a look at the car before returning to the track, unfortunately prompting another safety car period a few minutes from the end after finding the barriers at the last corner.

But Chilton was happy to claim the win after absorbing everything Gutierrez had thrown at him, and the pair hugged in parc fermé in acknowledgment of an epic battle. Leimer crossed the line a few seconds back, happy with his day's work, ahead of 2012 series champion Valsecchi, who was shadowed by his vice champion Razia. Felipe Nasr took advantage of an early stop to jump up to sixth place, just ahead of Marcus Ericsson and Giedo van der Garde, who had a few torrid battles for P7 and 8, while Rio Haryanto and Nathanael Berthon rounded out the points positions.

Valsecchi was greeted by his team in the pits like a returned hero, and they were already wearing his championship shirts as his 241 points can't be beaten by Razia (214). Gutierrez will be hoping to hold on for third place tomorrow, on 172 ahead of Chilton on 169 and Calado on 160. DAMS will be hoping to hold on for the teams' title, leading Lotus by just 2 points (334 to 332), with Arden looking for third place on 218 points from Carlin on 207 and Racing Engineering on 202 points with just tomorrow's sprint race remaining in the 2012 calendar.