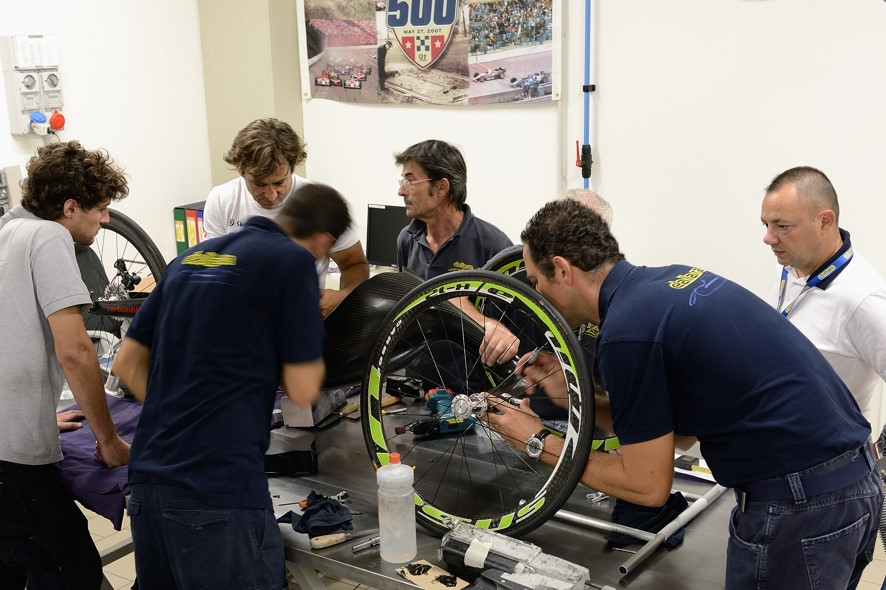 Alessandro Zanardi, a person always able to smile at life and give thanks for everything it has given him, has returned victorious from the latest Paralympics, having won three medals: a gold in the individual time trial class H4, another gold medal in the individual H4 (a 64 km race), and a silver in the medley relay.

These remarkable achievements were all accomplished with a very special handbike, developed largely in Dallara, with the aid of professionals and friends whom he has known for much of his life, since he began racing in the 1988 Formula 3 championship with a car made in Varano.

The process of development closely mirrored that of a race car: once both he and his bike were scanned to produce a 3D model, there followed an in-depth study of aerodynamics using advanced CFD (Computational Fluid Dynamics), aimed at the development the final form of the bike. With this stage completed, structural analysis using FEM methods (Finite Element Methods) are applied, as well as many laboratory tests. It was not at Alex’s request, but Dallara knows no other way to deal with any technological challenge except that with the greatest of passion.

A prototype mannequin was constructed during the development process to help determine the best driving position with the final design and first prototype ready in July, followed by the definitive handbike. The first and final "spin" Alex was only able to accomplish on the 1st August, it's appropriate to say "right first time", so much so that with his new "Dallara" Zanardi won the three medals in London. All this within the limits of the technical regulations which imposed constraints dimensional and functional, just like in a racing car.

The hard work created a unique prototype for Alex, almost a " Cinderella shoe ", but the construction methods developed can also give life one day at a different design, to create a model adaptable to all, even to people without disabilities who wish to participate in open air sports, which is undoubtedly new and exciting.

Mr. Dialma Zinelli, which among other things promised to be the first "test" of this hypothetical prototype, is in charge of aerodynamics in Dallara and directly supervised the project: "The hardest thing was to define the best riding position, with the correct height and a comfortable shell. But for each small change, Alex gave us very precise feedback due to the sensitivity he developed as a driver." Regarding the whole project, he added: "It's been fantastic, emotionally intense; the team was extraordinarily motivated and the driving force behind this enthusiasm was Alex."

Dallara's CEO, Mr. Andrea Pontremoli, added: "Alex was able to involve the entire company with dream and we are proud that the result rewards an exceptional person. It has also promoted the image of an Italy that works."

Similarly, Mr. Gian Paolo Dallara said "he is a unique person, enriching those who have the privilege of knowing him."

After this feat, Zanardi declared: "We can hold people in esteem simply because you believe in their merit, but when you add to this a relationship of great friendship like the one I have with Mr. Dallara and Mr. Pontremoli and with the many people who work in Varano, then the desire to do something special with them becomes very strong.

In my "youth" I drove a Dallara, in a Formula 3 Championship, and to race with a car made in Varano was the only way to be competitive, almost like running in a one-make formula.

I had to invent this new, exciting, adventure sport to make this tribute to my Friends and stir emotions that only a tough competition to win can give you and in the end you know, with great pride, the signature of everyone is metaphorically at the bottom of this small exploit. Dialma, Francesco, Giacomo, Andrea, and again Roberto, Carlo, Nicola, Fabrizio, Leonardo and all the people who designed and "tightened the bolts" of my fantastic machine were all on board with me during the races at Brands Hatch and share with me the merits of one of the greatest joys I ever felt in my career.

And I said to myself whilst waiting to lift the cup (which will be filled several times….) Dear friends, thank you! "

Zanardi serves as an example to inspire everyone, in particular young people.

A fantastic story for a great champion.