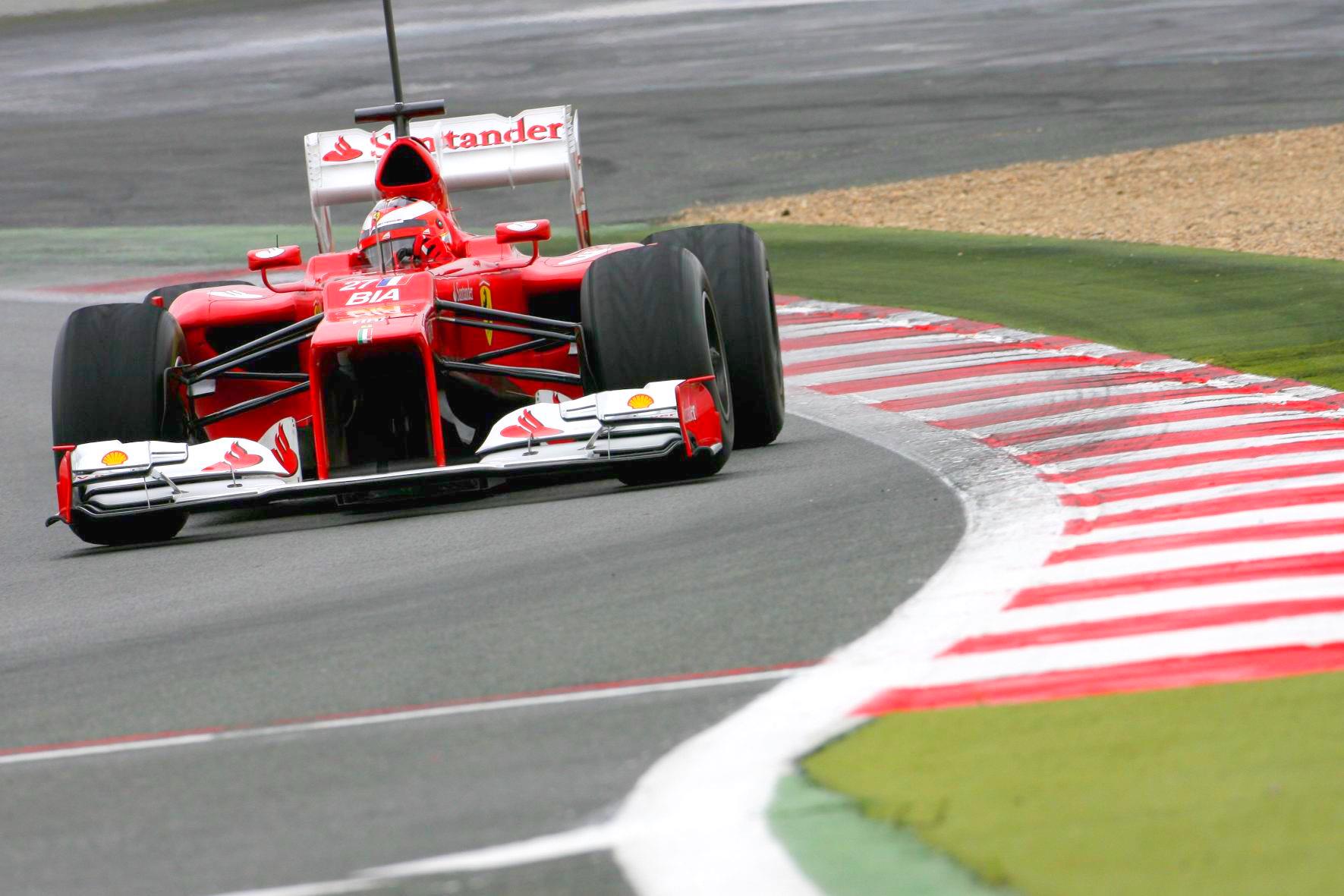 Morning running was limited after light overnight rain left track conditions damp for the 9am start, though the teams were able to complete a number of medium-length runs before lunchtime.

And though dark clouds continued to linger above the track no further rain would fall, ensuring the remainder of the session took place on a dry circuit. In fact as running continued into the afternoon there were increasing expanses of blue sky and sunshine above, allowing the teams to up their workloads and add further mileage to that accumulated earlier in the week.

Of chief interest during the final day was Frenchman Jules Bianchi's bid to complete a clean sweep of the test after topping the timesheets on both Tuesday and Wednesday.

The 23-year-old switched back to Scuderia Ferrari after spending yesterday aboard Sahara Force India's VJM05 and once again proved unbeatable, recording a 1m16.985 late in the session to ensure his dominance of the test. Bianchi ran a total of 138 laps before quickly departing the circuit en-route to his crucial Formula Renault 3.5 race weekend in Hungary.

Second fastest was GP2 Series competitor Rodolfo Gonzalez who made his first appearance for the Sahara Force India outfit at Magny-Cours, though the Venezuelan could call upon previous Formula 1 testing experience as he acclimatized to his new equipment. The 26-year-old worked through 79 laps in the Mercedes-powered machine with a best effort of 1m18.018.

Completing Thursday’s runners was MERCEDES AMG PETRONAS driver Brendon Hartley with a lap of 1m18.671. It was a significant day for the 22-year-old New Zealand-born driver as he made his first appearance in an official test session for the German manufacturer, though like Gonzalez the Kiwi had prior seat-time in Formula 1 machinery ahead of his 87-lap program.

Impressively, Thursday’s running was not interrupted by a single stoppage as all three drivers proved highly competent at the controls of Formula 1 equipment.

Jules Bianchi, Scuderia Ferrari: "After these three days of testing I feel ready to race in Formula 1. I grew up a lot and learned a great deal driving with Ferrari and Force India, so it has been a good experience all-round. As it was damp this morning we just ran checks. It was my first time on intermediate tires, so I was familiarizing myself with the track and car in those conditions. Driving in the wet was cool, though obviously there was not a lot of grip out there on the inters. Overall I think this has positive test for me and I feel even more prepared for Formula 1."

Rodolfo Gonzalez, Sahara Force India: "Today has been a great experience. The conditions were quite difficult to begin with because of the wet start to the day, but it was good to try out the wet and intermediate tires. The other main task was getting used to the control systems and building my speed and feel for the car. I’m quite happy with my pace today, although I think there was more to come because it was my first time driving at Magny-Cours and my first time in the car. The team did a great job of making me feel welcome and comfortable, and I really hope to get another chance to drive a Formula One car soon."

Brendon Hartley, MERCEDES AMG PETRONAS: "It was an amazing feeling to be back driving a Formula One car today and I would like to thank the MERCEDES AMG PETRONAS team for giving me this opportunity. The track was quite wet this morning so we lost some time but once it had dried out we were able to get on with the test program, using mainly the hard tire. It was a successful day for both me and the team, and we completed the program, despite the weather."