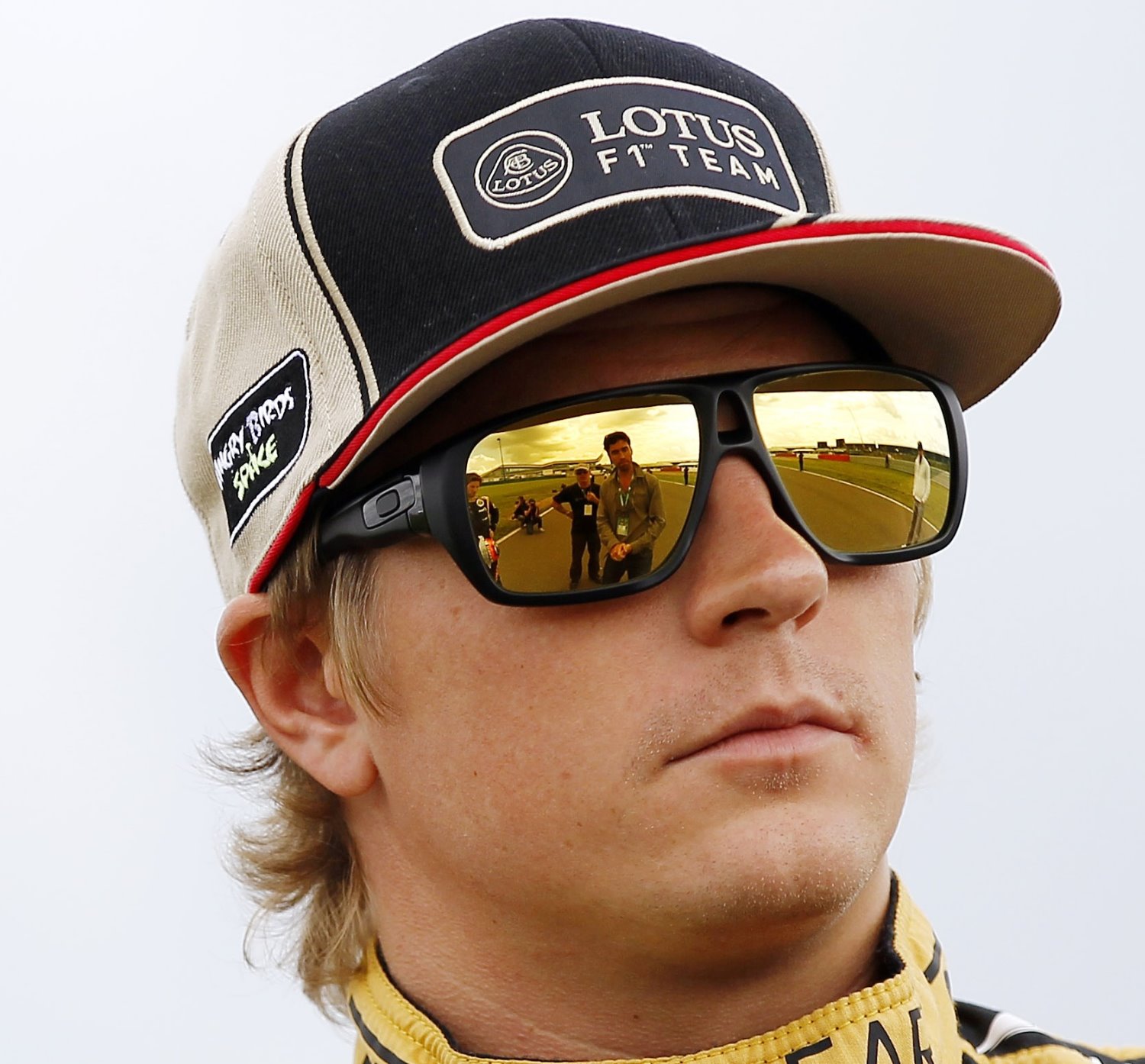 After sitting out two full grand prix seasons while he forayed in world rallying and Nascar, F1's 2007 title winner returned with Lotus this year and after the first half of the calendar is within reach of the top of the standings.

"He is at a very high level," Austrian Karl Wendlinger, who raced with Sauber in the mid-90s, said on Red Bull-owned Servus TV.

"After a two year break, to have a lot of podiums already is sensational. He is very fast in the races and again and again is going for the wins.

"I think everyone up to and including Raikkonen in fifth place can still fight for this championship," Wendlinger, also referring to Lewis Hamilton, the Red Bull drivers and title leader Fernando Alonso, added.

Wendlinger, now 41, admits Raikkonen is "quiet" and has not always had the best reputation in terms of how dedicated he is to his chosen sport.

But he insisted: "Kimi was not world champion for nothing.

"His lifestyle was maybe not the best, but whoever can fight in the temperatures we saw in Hungary until the last lap must be in good condition."

Martin Brundle, also a former grand prix driver and now a commentator for British television Sky, admitted he was impressed with Raikkonen's "face like a wet Monday morning" after missing out on the win in Hungary.

"It really impresses me that he takes that much pain on what by any standards is a very successful return," said the Briton.

With the fabled circuit now in an insolvency process, reports last week said F1 supremo Bernie Ecclestone could be the Nurburgring's savior.

But when asked in Hungary if he is buying the German track, Ecclestone told Der Tagesspiegel newspaper: "No.

The latest news from Germany, however, is much more positive.

The Rhineland-Palatinate state government has agreed to guarantee a EUR 254 million loan so that the Nurburgring can service its debts, Frankfurter Allgemeine Zeitung (FAZ) newspaper reports.

And Nurburgring Automotive GmbH (NAG) chief Jorg Lindner said: "I am very optimistic that formula one will be going to the Nurburgring next year."

FAZ said negotiations with F1 officials will take place over the summer period.

Ecclestone said: "We don't want to lose any of the racetracks, and we need to keep the race in Germany. We will do our best.

"It has surprised me that all these tracks in Germany have financial problems — maybe they gave all their money to the Greeks," he joked.

F1 chief executive Ecclestone was also asked about his comments ruling out buying the Nurburgring.

Did he mean that any sort of financial help is out of the question?

"Let's wait and see. At the moment we are having talks."

He also said that if a solution for the Nurburgring cannot ultimately be found, his sport will "go to Hockenheim" instead in 2013.

"We're also in talks for that," Tagesspiegel quoted Ecclestone as saying.

Perez pushes Ferrari for 2013 seat decision
(GMM) Alongside the high-profile champions Kimi Raikkonen and Jenson Button, a hatful of candidates are also in the running to secure the second Ferrari seat next year.

That is the claim of Blick (Switzerland) and La Gazzetta dello Sport (Italy) newspapers, admitting that Raikkonen and Button are much more likely to stay with their respective current teams – Lotus and McLaren – in 2013.

Another driver who this week has confirmed he might be in the running is Sergio Perez, the young Mexican who already races a Ferrari-powered Sauber, and who is the cream of Ferrari's driver development 'academy'.

"If there is an opportunity with them (Ferrari) or another team then it's the time to know," the 22-year-old was quoted on Wednesday by the Press Association.

Alguersuari picks Alonso for third F1 title
Jaime Alguersuari may have missed out on the 2012 Formula 1 season as a driver, but has been enjoying the action alongside James Allen and Jonathan Legard in his role as BBC Radio 5 live analyst. Furthermore, the Barcelona-born man is confident that fellow countryman Fernando Alonso can wrap up a third world title this year.

Alonso has yet to clinch the crown since he did so in back-to-back fashion for Renault in 2005 and 2006. After the Hungarian Grand Prix, in which he finished fifth, the Ferrari driver heads into the summer break with three 2012 wins to his name and a 40-point cushion in the points table; this is despite the coherently close nature of the current Formula 1 campaign.

“It's all so close and it makes it much more interesting," Alguersuari writes in a column for BBC Sport. “It has been very enjoyable trying to commentate on it, never quite knowing what will happen. A big reason for this is the fantastic job being done by the FIA to make F1 fairer for all the teams, especially the ones with smaller budgets."

Moving on to discuss the championship situation, Alguersuari continues:

“Leveling the field has made the drivers more important and that is one of the reasons why Alonso is leading the championship. He has been helped by the amount Ferrari have developed their car. When they were so slow at the first race, I thought the season was already over for them in terms of the championship. They still don't have the best package, but it's in the general ballpark and they have a really good driver.

“I have never seen a season from Alonso like this. It has been hugely impressive. It's crazy to think that a guy whose car was so slow at the start of the season is leading the championship by 40 points – a win and a third place – with nine races to go…a bad result for him is a fifth place. All the other drivers would love to be able to have that.

“I think he will win the championship if he continues doing his job like this – and I don't see any reason why he won't…I know from winning in other categories that when you have this self-confidence, with everything in control, it is because you are completely sure in what you can do. You are completely patient and it's like nothing can stop you. It's difficult to explain, it's just a driver's feeling."

Alguersuari is also confident of an F1 comeback of his own in 2013. Two of the teams he has been linked to so far are Mercedes and Sauber.

2012 sagas 'binding Red Bull together' – Vettel
(GMM) World champion Sebastian Vettel insists he and Red Bull will keep their eyes on the ball in 2012, despite the rocky road of the opening half of the season.

The 25-year-old German began the season bidding to join very illustrious company, with Juan Manuel Fangio and Michael Schumacher the only other drivers in modern F1 history to have won three drivers' titles on the trot.

But with half of this year's grands prix now in the past, Vettel is 42 points adrift in the 2012 chase and just third, with his team Red Bull seemingly always in the middle of one sort of controversy or another.

Whether it's the latest technical saga, or a post-race penalty described by Dr Helmut Marko as the "death penalty for stealing chickens", it has not been plain sailing for Red Bull.

Some even smell a conspiracy.

Add to that the separate 'hole in the floor', wheel hub, engine mapping and ride-height adjuster sagas of 2012, and Vettel might be forgiven for wondering if Red Bull's focus could be at risk of succumbing.

Not so: "All the trouble lately is not pushing us apart," said Vettel, when asked about Red Bull's unity. "Actually it binds us together even more."

But for now, he is just happy to be staring into a long break.

"It's a long season," said the German. "If you compare it to a lot of other sports, it's one of the longest seasons there are.

"I think it's important, even if sometimes you would like to carry on, I think you need the break, so it's important to make use of it."