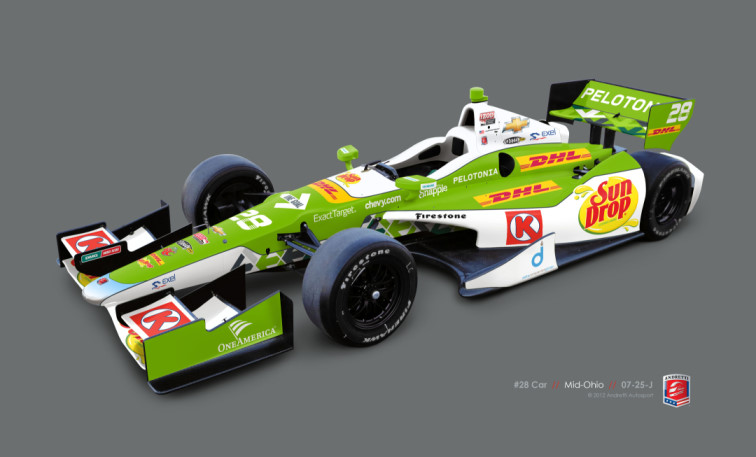 Andretti Autosport and DHL announced today that Ryan Hunter-Reay will display a special paint scheme at Mid-Ohio to include Pelotonia and represent the 28 million people battling cancer.

Pelotonia is a bicycle ride headquartered in Columbus, Ohio that was founded in 2008. This year's ride will take place August 10-12, with every dollar raised going towards cancer research. In its first three years, Pelotonia has attracted over 8,300 riders from 38 states, about 2,800 volunteers and raised $25.4 million for cancer research.

Hunter-Reay chose to run the number 28 on the DHL / Sun Drop Chevrolet IndyCar to honor those fighting cancer worldwide. The number is an important part of his mission to raise awareness, as Hunter-Reay is a co-founder of "Racing for Cancer" and serves as one of only 13 global envoys for the LIVESTRONG foundation.

All of the funds Pelotonia raises this year will directly support research conducted at The Ohio State University Comprehensive Cancer Center – James Cancer Hospital and Solove Research Institute. By holding their bike ride each year, a team of scientists can continue to discover better cancer treatments and prevention strategies.

Thomas Lennox, CEO of Pelotonia:
"We are thrilled to partner with Ryan Hunter-Reay and Andretti Autosport for the Indy 200 at Mid-Ohio. Ryan is very involved in cancer research and prevention, so we feel that he will represent Pelotonia and all that we stand for. Having Pelotonia featured on his race car will do a lot to help publicize our cause and our annual bike ride, August 10-12."

Ian Clough, CEO of DHL Express U.S.:
"DHL is committed to making a positive impact in communities where we live and work and we are honored to support Ryan as he raises awareness for all the millions of people who are battling cancer. Just as we are the leader in international shipping and logistics, we applaud Ryan for being a leader in this vital endeavor and are confident his efforts will yield great results."

Ryan Hunter-Reay, Driver, No. 28 Team DHL/Sun Drop/Pelotonia Chevrolet:
"I'm happy to carry the Pelotonia colors at Mid-Ohio and to support their efforts to raise awareness and funds to help cancer research in Ohio. The fight against cancer is something I've been involved with for several years with my own charity, "Racing for Cancer," and as a global envoy to Livestrong. I hope the unique look of the No. 28 DHL/ Sun Drop car this weekend will help their cause."