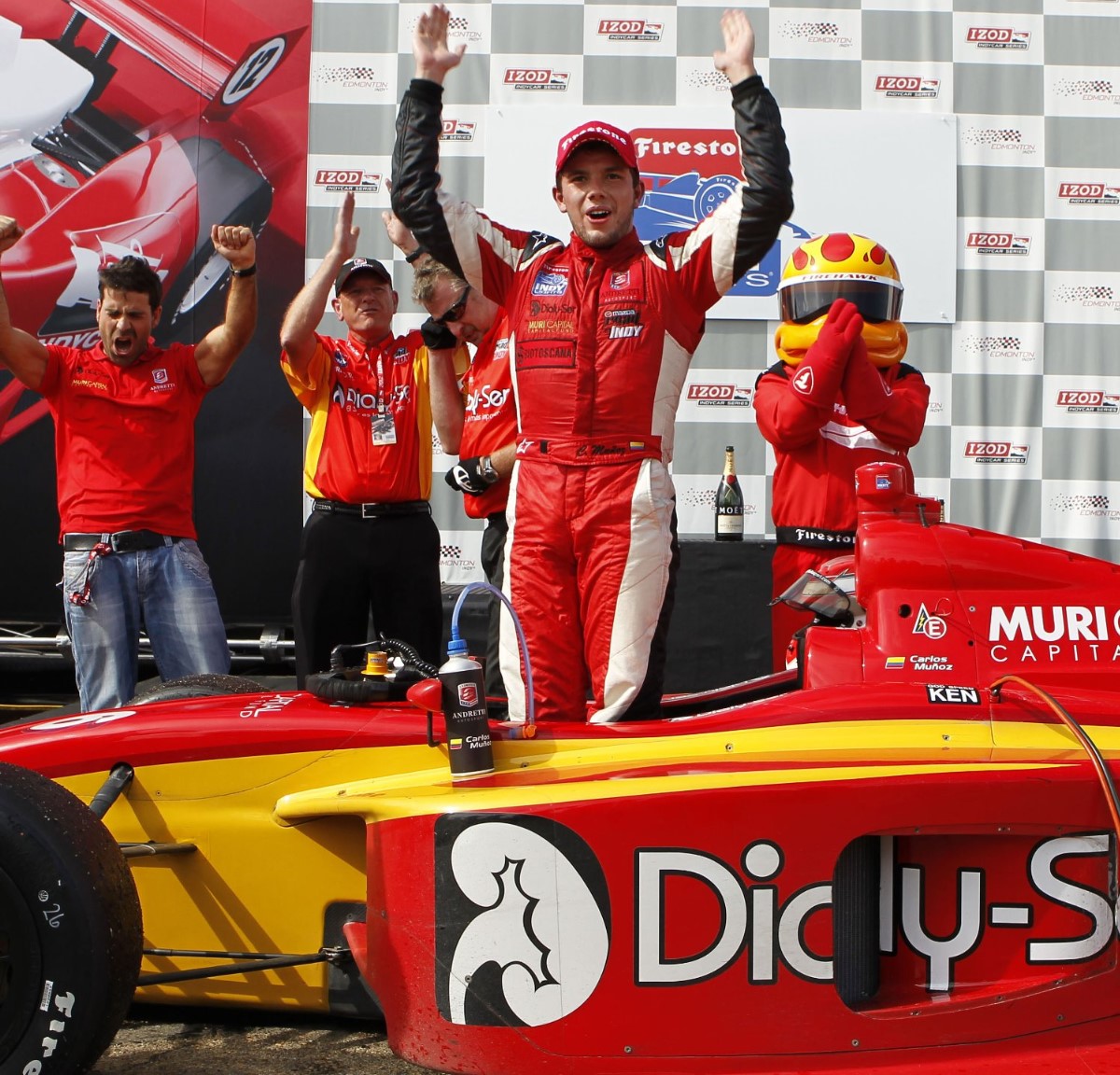 Polesitter Carlos Munoz regained the lead on Lap 17 of 40 following a Lap 14 pit stop to have rain tires replaced with slicks and went on to victory in the Edmonton 100.

It was the first Firestone Indy Lights win for the 20-year-old Colombian in the No. 26 Team Dialy-Ser car for Andretti Autosport.

"It was a crazy race with rain," said Munoz, wrapped in the Colombian flag in Victory Circle. "Once it was dry, the car was unbelievable."

Sebastian Saavedra, driving the No. 27 Team AFS car, was 8.3453 seconds back and Esteban Guerrieri finished third in the No. 11 Pistas Argentinas/Sam Schmidt Motorsports with Curb Agajanian car.

Guerrieri, the 2011 race winner who notched his seventh podium of the season, holds a 27-point lead over Saavedra in the championship heading to the event in two weeks in Quebec.

CARLOS MUNOZ (No. 26 Team Dialy-Ser, winner Edmonton 100): "It was a crazy race with rain. Once it was dry, the car was unbelievable. The guys did an awesome job all weekend; first in practice, first in qualifying, first in warm-up and now the race. It's impossible to do any better. And the pit stop, the guys just did an incredible job. Still Esteban was a little bit faster than me, but I knew I was really fast. I took it slow and I overtook him. After that I pushed a lot. I have to thank my guys. I'm really happy to get my first win.

SEBASTIAN SAAVEDRA (No. 27 Team AFS, finished second): "It's a great result for the team, especially after a bad qualifying result on my side. We knew that the points were very important. Right now we're second in the championship and that's incredible for us. 1-2 for Andretti Autosport, that's amazing effort by the guys. We had an amazing pit stop. I really want to thank my guys, and congratulations to (teammate) Carlos (Munoz). He was in a race of his own. It was a great battle. Lots of respect for Esteban Guerrieri, he's shown incredible sportsmanship during the season."

ESTEBAN GUERRIERI (No. 11 Pistas Argentinas/SSM with Curb-Agajanian): "It's those days that you have to get the best that you can. Even if I was leading, I felt like it was tough to be on the pace in the wet. It took me a little bit slow, but when [Saavedra and Munoz] were there I tried to overtake and just stay away from the mistakes. You could see the track was quite quick, different from qualifying when the track took a long time to dry, but now it dried quite quick so all the sudden we found out that it was a dry track and the stop was crucial. We saw the Andretti guys pitting one lap before and they came out, and I saw Oli [Webb] coming out in front of me, so I felt like it was time for pit for slicks. And the Sam Schmidt guys even if they are not very used to pit stops, they made good time and tried not to hurry and make a mistake, so that's what they did. What's important that we scored more points and we kept on top of the championship which is what matters, and another podium is important."

OLIVER WEBB (No. 7 Lucas Oil/Sam Schmidt Motorsports): "I had a good start, but Esteban had a really good start in front of me. He dictated the start because he got on the throttle and went straight to the front. We went three abreast into the corner and I made up one place going down the back straight. Then on the outside with Tristan going into Turn 5 I ended up in the grass and lost four places. That was all on lap one. From there I had to work my way back up. I gained two spots and decided to come in pretty early for slick tires. From there it was a case of making sure I had the temperature in the car before everyone else. Our car was pretty good. We had a good set up but it was just a little too late because the Andretti cars had such good pit stops."

PETER DEMPSEY (No. 9 Belardi/TruFuel, finished fifth): "Not the plan, for sure. Munoz on pole jumped the start. He went before (the spot) we talked about in the drivers' meeting and it caught me off guard. I went to the radio to say he jumped the start, and I hit the ignition switch and it dropped me back to the back. Once I got back there, there was not much I could do. It was damp and I couldn't see, so I just tried to get into a rhythm and pick them off one by one. Sorry for the team. We had a good car all weekend. We were in the top two since we got here, and they deserved a podium. The Belardi Auto Racing TruFuel car had good performance all weekend. Maybe I am just a little race rusty. I need to keep plugging away. We brought home another top five for the team and we're getting closer to the podium."

TRISTAN VAUTIER (No. 77 Mazda Road to Indy/SSM with Curb-Agajanian): "It was a rough day, though it started off really well. My pace in the rain was really good and I was actually able to get up to third after falling back to sixth at the start. Then everything was good. I was trying to run clean laps, not make mistakes and not abuse my tires. Unfortunately, my earplugs unplugged themselves so I couldn't hear my crew when they told me when to stop to change tires. I saw Esteban pitting behind me, so I went one more lap and then pitted. We lost some time in the pits, and that put me in some battles with guys on the track and I just got on a bad pace.Then, I felt like we lacked some speed on the dry. Yes, it was a tough weekend. For some reason, we never could get it to click today."

VICTOR CARBONE (No. 3 Mav TV/Nevoni/SSM with Curb-Agajanian): "I had a really good start. But after that, Gus (Gustavo Yacaman) tried to pass me, we touched and the car wasn't the same after that. Once we touched, I struggled after that. He didn't give me any space. It was just stupid to be honest. It was challenging during the weekend to go from wet to dry a few times, but I think it's fun. The race wasn't fun. It was just a bad weekend overall. We'll do better at Trois RiviÃ¨res."

DAVID OSTELLA (No. 22 TMR-Global Precast-Xtreme Coil Drilling): "I had a phenomenal start. I think I passed four or five guys on the start. The car was great in the rain and we were doing really well in the initial stint of the race. When the sun came out it was all about coming in to change tires. Unfortunately I think we came in a lap or two too late. After that we just made sure that we stayed consistent and conserved the tires in case I had a battle at the end, which I did. I ended up spinning in the last lap on Turn 12 though. It's not the way we wanted the weekend to go but it's still a top-10. We struggled finding speed here in Edmonton, but we were able to resolve the braking issue that we had in Toronto."