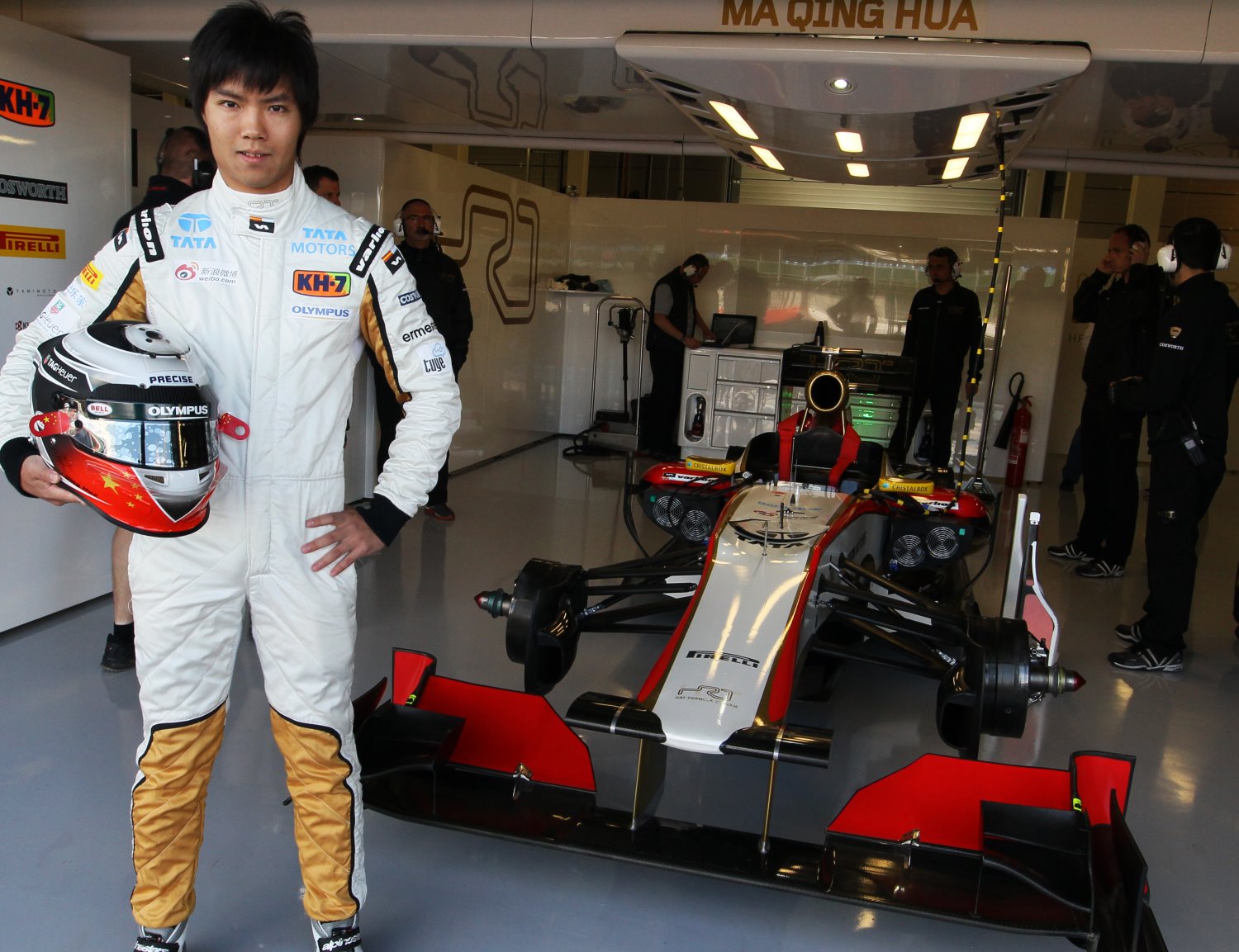 Ma Qing Hua joined HRT Formula 1 Team’s young driver program just three months ago and in this time he has been preparing with the team for the challenge of Formula 1. He finally had the opportunity to drive the F112 yesterday at the Young Driver Test which took place in Silverstone. He passed the test with flying colors and it wasn’t only a great day for the team but also for Formula 1 in general as he became the first driver born in China to drive a Formula 1 car at an official event.

Yesterday you stepped into a Formula 1 car for the first time, what was that first contact like?
It was a fantastic experience and it’s really hard to put into words everything I felt when I got into the Formula 1 car. It was very special but also productive; a great day. Everything went perfect; the weather was on our side, it didn’t rain and we were able to carry out the established program without any trouble. It was intense because we practically didn’t stop but that enabled us to cover a lot of miles and finish with a good time. My family and some friends were present and it was very special. The team also supported me a lot and I want to thank them for their work.

What was the work program?
The days before the test were non-stop and the team focused completely on me to prepare the test program, the steering wheel, the seat, the pedal measurements… All the details that have to be perfectly under control ahead of the test. I must confess that the night before I struggled to sleep a bit because it was an important test and I didn’t want to make any mistakes. But everything went well and we basically did everything. Short stints and qualifying simulations with both tire compounds, long stints, start simulations, pit stop practices… It was a very intense but productive experience.

And all of this in only one day…
Yes, everything went smoothly and we almost did 500 km! It didn’t rain, there were no interruptions on the track or anything that forced us to stop, so we were able to cover everything we had planned in just one day.

What was the objective of this test in particular?
Mainly for me to adapt to the car and to gain confidence in different situations. It wasn’t a matter of proving anything but for us to work together and improve with every lap without making mistakes.

Was it just how you expected?
In truth it was quite different to what I expected. The F112 is much more comfortable than I thought on the track. You can push it to the limit and it feels good, very stable. I felt comfortable with the balance of the car and with the team’s work, because I think we jell together very well and the result was optimal. It was much better than I expected.

That’s in terms of the car’s behavior, but how did you adapt to the car?
For me the hardest thing was to remember how the systems and steering wheel worked whilst I was driving. And also the things that require most practice: the start, pit stops, the pull away… All of this is hard to take in in just one day, because you have to learn the circuit well, get to know the car, the team…There are many things at the same time, but it wasn’t a bad way to start.

You joined the team three months ago, what has this time been like and what have you been working on?
The program started months ago with the objective of preparing these tests well and then continuing to advance. We carried out tests with cars from junior categories such as World Series and GP2, but also training away from the track such as physical preparation and work on the simulator. I’ve accompanied the team at every race to take in the daily work routine and soak up advice from the technical staff and my teammates Pedro de la Rosa, Narain Karthikeyan and Dani Clos. I’ve also been at the Caja Magica headquarters on various occasions to work with the engineers and all of that helped me to head into the test from a better position and already knowing the team, the car and dynamics.

From the very start the team has given me all of its support and I’ve felt completely backed which makes me feel really comfortable with everyone. I’m lucky because, besides learning from them every day, I’ve integrated really well.

And now, what is the next step?
For now we’ve taken this step which was very important. But I’m also aware that it’s only the first one. I know where I want to get to and that I still have a lot to do so the next step is to continue working and progressing to be prepared for the opportunities that may present themselves.

It was an historic day for Formula 1 and HRT Formula 1 Team today at the Silverstone Circuit where Ma Qing Hua made his debut at the wheel of the F112, becoming the first Chinese driver to drive a Formula 1 car at an official event.

As opposed to the previous days, the weather permitted the first day of the Young Driver Test to take place without any setbacks and Ma Qing Hua was able to make the most of the test. The morning’s program included short test stints for the Shanghai-born driver to adapt to the car and build up confidence at the wheel, completing 54 laps (318 km). These tests were carried out with both hard and soft tires so that he could also experience the difference between both compounds. In the afternoon, Ma Qing Hua covered a further 28 laps (165 km) where he completed two qualifying stints, one with hard tires and another with softs, start and pit stop practices and a final long distance stint.

Ma Qing Hua satisfactorily completed the scheduled program throughout the day, so the team has put an end to these tests and will head towards Germany tomorrow for the tenth Grand Prix of the season which takes place at the Hockenheim circuit from the 20th to the 22nd of July.

Ma Qing Hua: "It was a fantastic feeling to drive a Formula 1 car for the first time; it’s not easy to put into words what I felt. Yesterday I found it hard to sleep and I tried to calm down by thinking that it was just another test. I think we did a good job and everything went according to plan, with good weather too. By being here during the Grand Prix, I learned a lot from my teammates and also to work as a team, as it is very important to give the right information to the engineers in order to optimize the performance of the car. In the morning we did the maximum amount of running to get used to the car, engineers and mechanics and buttons, and also to gain confidence. I’m very proud to represent China and be a pioneer for my nation in this sport. I’m confident that these tests and the ones that will come in the future will help motorsport to grow in China in the future and will grant more opportunities for everyone. This is only a first small step but once more I want to express my gratitude to everyone who has supported me and made this possible".

Luis Perez-Sala, Team Principal: "We’re very happy to have given Ma this opportunity and also very satisfied and proud of how it went. We’ve got a lot of trust in him and he has responded by doing a good job. We’ve followed him for a long time and since he joined our program he’s proven his ability and work capacity. And today he showed it once more with an excellent job. It’s not easy to drive a Formula 1 car and he made no mistakes. We want to take things one step at a time with him and this test was for Ma to have his first real contact with a Formula 1 car at every level. He did a great job and now we have to continue working so that he can continue to progress in his journey towards Formula 1".