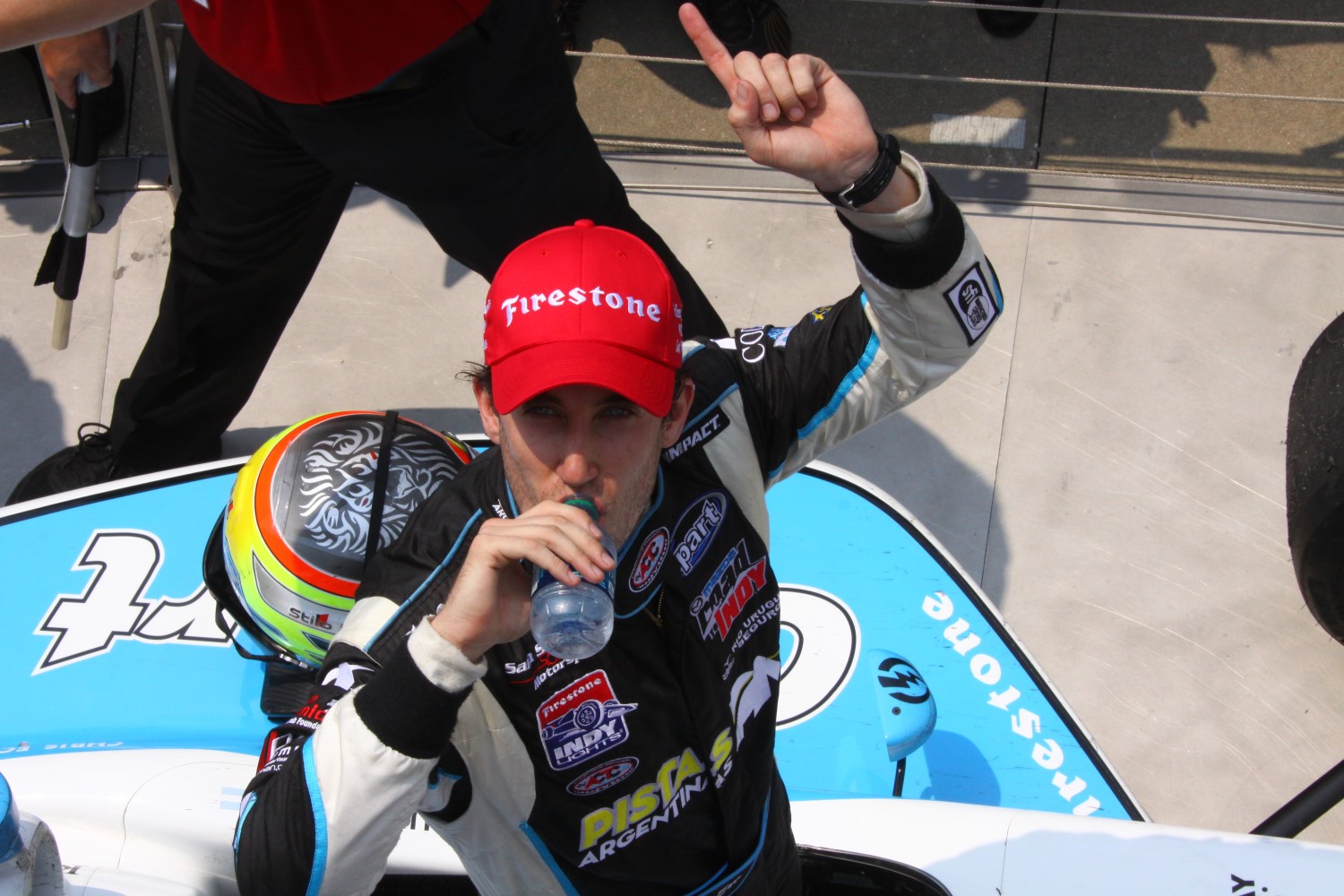 Starting way back in 18th, Esteban Guerrieri from Argentina knew the only way to win the biggest Indy Lights race of the year, the Freedom 100 at Indianapolis Motor Speedway, was to run the car loose (with the tail out) because everyone in racing knows that the fastest way around a race track is loose, and if you cannot drive a race car loose than you will never be a great race car driver. Period.

Guerrieri and his race engineer set the car up loose and Guerrieri took the car to the front from back in 18th to win over Carlos Munoz and Tristan Vautier in what some are calling one of the best Freedom 100 races.

Esteban Guerrieri overtook race leader Tristan Vautier and Gustavo Yacaman in Turn 1 on Lap 38 and went on to win.

A close final two laps were expected, but the No. 4 Belardi Auto Racing car driven by Jorge Goncalvez made moderate contact with the Turn 2 wall on the 2.5-mile Indianapolis Motor Speedway on Lap 39, bringing out the yellow flag. He was checked at the infield care center and cleared.

Carlos Munoz, who got around Vautier and Yacaman before the caution finished second with Vautier settling for third place.

At 12:30 p.m., the ambient temperature was 86 degrees with a relative humidity of 48 percent and southwest winds at 9 mph. Skies were sunny. The track temperature was 116 degrees, according to Firestone engineers.

#28 Krohn stopped at start of pit lane at end of pace lap. Car was late leaving the grid.

Medical update from Dr. Michael Olinger, INDYCAR medical director: Emerson Newton-John, David Ostella and Oliver Webb were evaluated and released without injury from the IU Health Emergency Medical Center at IMS. They are cleared to drive. The other two drivers involved in the accident, Peter Dempsey and Brandon Wagner, returned to the pits in their cars and did not visit the IU Health Emergency Medical Center.

Lap 39: YELLOW. #4 Goncalvez low in Turn 2 and does half-spin, hits SAFER Barrier with left front and left side of car. Does half-spin forward, slides down track.

ESTEBAN GUERRIERI (No. 11 Pistas Argentinas/SSM w/Curb-Agajanian): "I'm really, really happy. It was one of those weekends that I trusted I was going to finish well even though I qualified bad. I'm overjoyed. From last to first, I'm really happy." (About pass for lead): "That was a tough one. Halfway through the race, I was fighting with oversteer. My engineer, Tim Neff, told me to be patient, that everything would happen in the last five laps."

Medical update from Dr. Michael Olinger, INDYCAR medical director: Jorge Goncalvez was evaluated and released without injury from the IU Health Emergency Medical Center at IMS. He is cleared to drive.

â€¢This is the fifth career Firestone Indy Lights victory for Esteban Guerrieri and second victory this season. He also won the most recent event, at Long Beach.

â€¢Esteban Guerrieri is the first Argentine driver to win a race at the Indianapolis Motor Speedway.

â€¢Esteban Guerrieri and Tristan Vautier each have finished in the top three of all four Firestone Indy Lights races this season.

J.V. HORTO (No. 86 Juncos Racing): "It was very exciting. Coming from 16th position, it wasn't easy. It's my first time here. I'm still learning. It's the first time on the team, also. It's a new team in the series. I think the whole team did a great job. I'm looking forward to next year. Now that I know how it works, it's a totally different track. For sure I'm going to come back stronger next year."

CHASE AUSTIN (No. 87 Juncos Racing): "I thought we were going to have a few more cautions than we did. The driver messed up. I passed a car trying to catch the lead pack, and I thought I was in fifth, passing him, and I was actually in fourth when I down-shifted. I wasn't in a drafting gear, and it just killed all my momentum. By the time I got back up to speed, they were already gone. I was just sitting there by myself for a while, trying to get the car as best as I could if there was a caution, and it just never happened."

CARLOS MUNOZ (No. 26 Team Dialy-Ser): "I am proud to be here and also I'm really happy to be my first oval race and finish second. There is more to come this year. I hope this is the start of the year, of a pretty good year. I hope to finish like that, and then we can have a great car. And I have to thank my team, Andretti, for the opportunity. It was an awesome race. It was a really fun race. We were overtaking all of the time for second, third, fourth. It was really fun, though. I knew the race was in the last laps. We had a really good car all weekend. I have to thank my team for that."

OLIVER WEBB (No. 7 Lucas Oil/Sam Schmidt Motorsports): "We had a really good start. I got up to eighth from the back of the grid because of an engine change. The car was feeling absolutely amazing. David Ostella, coming up behind me, started to come down. He cleared my right and made contact with someone who made a late move down to my inside and touched my rear tire. Anyone higher than me, we were all collected together. A disappointing way to finish my first Freedom 100."

DAVID OSTELLA (No. 22 TMR-Global Precast-Xtreme Coil Drilling): "I feel so bad for the team. They worked so hard. Going into Turn 2, the guys in front of me kind of just touched and spun. I tried to go high, but I just got collected. It's unfortunate because our team worked so hard."

ANDERS KROHN (No. 28 Bryan Herta Autosport): "It's something very unexpected. I don't think I've ever experienced something like this before, just starting the seize-up right as we left the line here, and it just kept getting worse. It's such a shame, I was so excited to be here with Bryan Herta Autosport with my sponsors I-Tec, Yellow Jacket, Premier Glass & Mirror, and I wanted to put on a good showing for them. And not to take the green flag and cross the Yard of Bricks is so tough. But I want to come back. I will beat this place."

EMERSON NEWTON-JOHN (No. 42 Fan Force United): "It was just a gaggle of cars doing pretty ridiculous things. Two of them got together. I was close to getting out of it. I just got to a certain angle, and the thing broke loose."

BRANDON WAGNER (No. 17 Team E): "It's really unfortunate. We had a great race car. Just sometimes these guys, I don't feel like they use their head. I know it's obviously Indy and a huge race for us, but you've just got to be patient. We were going four-wide. That's fine and all, but when you're only on the fifth lap of the race, that's just crazy. Unfortunately, we had the position going into (Turn) 2, and the 7 (Oliver Webb) just came down on top us. I don't know what happened. I don't know if he didn't see me. It's just unfortunate."

ALON DAY (No. 9 Belardi Auto Racing): "Considering we almost didn't run because we had a damaged engine, I'm pretty happy. My first real lap here was qualifying, and I'm pretty satisfied. I finished the race, and it was good experience. It was my first time on an oval. Of course, I wanted to be closer to the front, but I'm still happy with the finish. The team did a great job changing the engine and working on the car. I'm happy. It's pretty amazing to drive here. It's my first oval, and I'm speechless."

SEBASTIAN SAAVEDRA (No. 27 Team AFS): "I think the experience I brought from racing here in 2009 helped today. I started 10th, and in the first corner, I was already fourth. It was a bit risky, but I wanted to get points here. From then on, we tried to save tires. I was just counting the laps until five to go, when I started pushing to get to the front. Unfortunately with four laps to go, there was an incident bringing out the yellow flag, and that killed everything. Congratulations to my teammate, Carlos. It was a very solid run, but I'm looking forward to Detroit to regain the points lead."

JORGE GONCALVEZ (No. 4 Belardi Auto Racing): "It was three laps remaining in the race, and I was trying to get the best finish I can. I came in really fast, and I lost the car in Turn 2. I don't know exactly what happened because the car got loose in the back, and I went straight into the wall. I want to win to race, and I thought I had the opportunity. It was very competitive, but it happens."

JUAN PABLO GARCIA (No. 76 Freightliner Jeffrey Mark Motorsport): "I am new to ovals; each lap was new to me. I didn't know what to expect. I finished the race. Now I need to work harder on oval racing. I really don't know how to race on ovals. I am still learning."

TRISTAN VAUTIER (No. 77 Mazda Road to Indy/SSM w/Curb-Agajanian): "It was so close. I really thought I had a good shot (at winning). I had so much fun. A big congrats to my teammate Esteban (Guerrieri). He started last and ran really strong. A big thanks to the whole team. I guess I'll have to come back next year and try to win it. I really thought that we had it. There's only one lap to lead, and that's the last one, and we didn't (lead it). I'm happy and frustrated at the same time. I wanted to win, but I'm here (in third). It's still a great day for Sam Schmidt Motorsports. "

MIKE LARRISON (No. 19 Belardi Auto Racing): ""Well, it got a little hairy there at the start. I got a little high between Turns 1 and 2. I brushed the wall, and we bent one of the U-links on the front end. It had a lot of understeer. I'd get up to the pack, and it just wanted to shove up to the wall. I tried every tool that I had in the cockpit, but I kind of hurt myself there at the start. We were there with the front pack and ended up ninth, so I'm excited for a top 10."