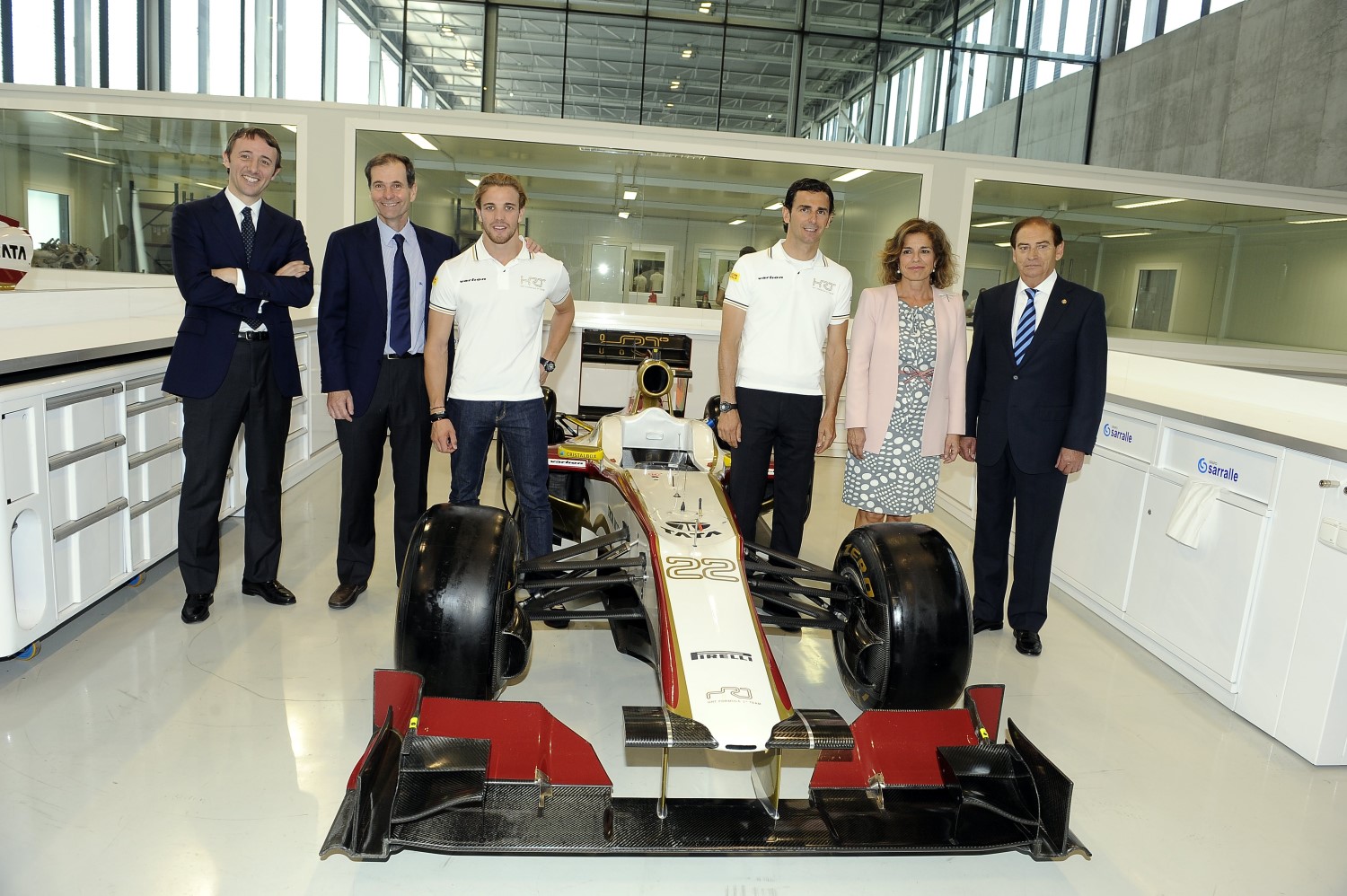 The day has come for HRT Formula 1 Team to officially open its doors to the new headquarters at the Caja Magica in Madrid. Team Principal, Luis Perez-Sala, and drivers Pedro de la Rosa, Dani Clos and Ma Qing Hua acted as the hosts of this meeting with the press, sponsors, suppliers and friends of the team. The Mayoress of Madrid, Honorable Madam Ana Botella and the President of the Spanish Motorsport Federation and Vice-President of the FIA, Mr. Carlos Gracia, wanted to accompany the team on such a special day. They toured the new facilities alongside the maximum representatives of the team, through the management, administration, operations and engineering areas up until the workshop where the mechanics were working on the F112 for the Monaco Grand Prix.

Everyone who assisted got an insight of the facilities where the entire team is already working and saw the result of the team’s effort in these short but intense months.

Once the official act concluded all the guests enjoyed some Spanish wine offered by Marques de Murrieta wine cellars, accompanied by the selection on pintxos that the prestigious catering company Arzak-Bokado has created at each of this season’s Grands Prix.

Honorable Madam Ana Botella, Mayoress of Madrid: "I would like to thank HRT for choosing Madrid to set up its headquarters. I congratulate them for being the first Spanish team to obtain a Formula 1 license, there are only 12 teams and just being there is very important for Spain. They’ve written a golden page in the history of Spanish motorsport and for the people of Madrid it’s an honor and a privilege to have them here. In the Caja Magica they have chosen the best facilities to become a sporting and technological icon and with this we are going to help Madrid to continue progressing and become an innovative city. With their presence we strengthen a sport that has thousands of followers and we give the citizens of Madrid a chance to get to know the Formula 1 world on the inside. I wish them the best of luck as their triumphs are also those of the people from Madrid and Spain".

Carlos Gracia, President of the Spanish Motorsport Federation: "Today is a very important day because we needed a Spanish Formula 1 team in Spain and now we have it. A few weeks ago I accompanied Jean Todt when he visited the facilities and he was impressed with what he saw. They’ve completed it in a record time, I’ve been by their side through this period and the effort they’ve put in is impressive and something we have to value, no one can complete a project like that. I’ve seen teams with more tradition who have been in Formula 1 for longer but I’ve never come across such a hungry and united team. We’ve achieved a lot but we must be patient, Formula 1 is the pinnacle of world motorsport and just being here and finishing races is a lot. I want to thank the Mayoress for making this possible. The Caja Magica is a magical project and I hope she feels proud".

Luis Perez-Sala, Team Principal HRT Formula 1 Team: "We’re extremely proud to have finally opened our doors to everyone and have shown what, since a few months ago, is HRT’s home. It’s been a lot of hard work but it’s a dream that has finally come true and an exciting project. This is the present but we continue to work looking ahead to the future to make this a top level sporting and technological centre and surely, with the help of everyone, we will achieve this".

Pedro de la Rosa: "It’s a pleasure to share such an important moment for the team with all of you. We’re satisfied because we’ve reached one of our targets which was to have modern and functional facilities like the ones at the Caja Magica. And we’ve achieved it. We’re on the right path to consolidate ourselves and gain confidence and competitiveness. Being in the Caja Magica will definitely help us to be quicker every day. As a facility it’s right up there with the rest. We’ve taken the first step but now we must take the next one and develop it for it to become a leading sporting and technological centre".