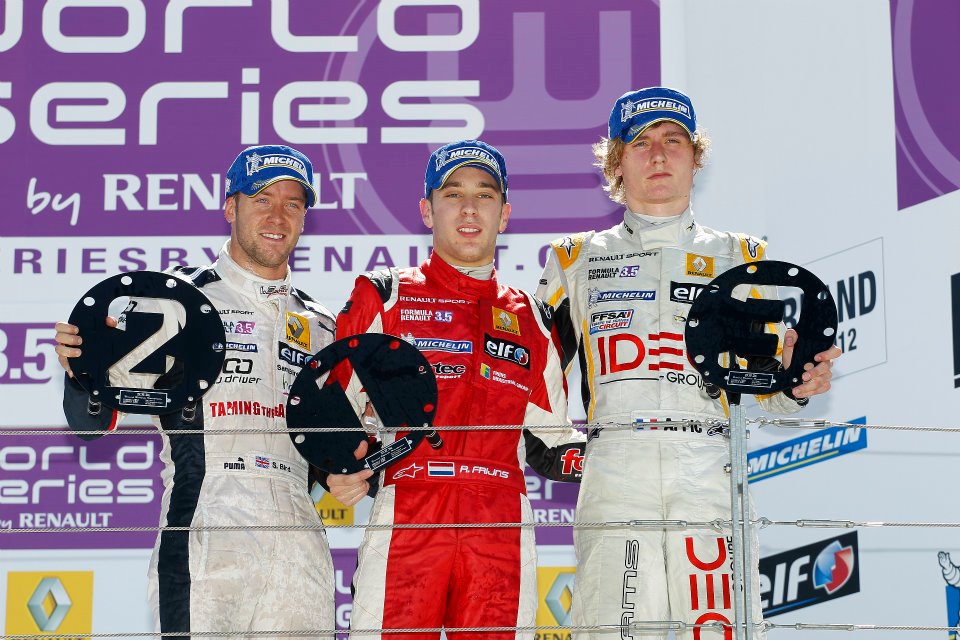 05/06/12 Robin Frijns (Fortec Motorsports) confirmed Motorland Aragon’s reputation as a happy hunting ground for rookies by winning Sunday’s race ahead of Sam Bird (ISR) and Arthur Pic (Dams). The 2011 Eurocup Formula Renault champion will also go into the next round at the Formula One meeting at Monaco atop the overall standings, having overtaken Saturday’s winner Nick Yelloly.

Pic began the day in fine fettle, taking his second pole in two days ahead of Marco Sorensen (Lotus). Occupying row two were Frijns and Bird, ahead of a race in which drivers were required to make a compulsory tire-change stop between laps five and 15.

After his slow start, things went from bad to worse for Pic when Frijns and Korjus both passed to leave him fifth and battling to fend off Richie Stanaway (Lotus).

There was little to choose between the top seven, with Sorensen setting a fierce pace out front to hold off Bird and Frijns with apparent ease. The third-placed Dutchman made a move on lap six, nipping past Bird and into second, while Korjus and Pic were locked in a thrilling fight of their own for fourth, with the Frenchman being the first of the leaders to make a stop in the hope of clawing his way back into the top three.

His bid was helped when race leader Sorensen suddenly encountered mechanical problems, the Dane crawling into the pits before retiring. That left Frijns the leader after the compulsory stops, ahead of Bird, Korjus, Alexander Rossi (Arden Caterham) and Pic, who was rewarded for his persistence ten minutes from the end, ghosting past Rossi and then the Estonian to move into third.

There was no stopping Frijns, however, the Dutchman taking victory in only his second race in the event, just as Korjus, the man who preceded him as Eurocup Formula Renault 2.0 champion, had done last season. The 25 points also took Frijns past Yelloly at the top of the championship standings.

Robin Frijns: “I moved up from 12th to fourth in Race 1, and so I had pretty high hopes when I qualified third today. I made a bad start, though, and there was a lot going on in the first few laps. Marco Sorensen had a problem and I made the most of it, though I’m not thinking about the championship. It’s great to win but I’m still learning the ropes here."

Sam Bird: “I think we were all a bit tense at the start. After a couple of laps I started to have problems with the car’s handling but I managed to hold on to my position all the same. I’m already thinking about Monaco. I got a pole there in last season’s GP2 Series there and I’ve got high hopes for that race."

Arthur Pic: “Two pole positions is good. Two bad starts is not so good. I managed to find some really good pace in the second part of the race. My tires were just right, while the others seemed to have a few problems with theirs."