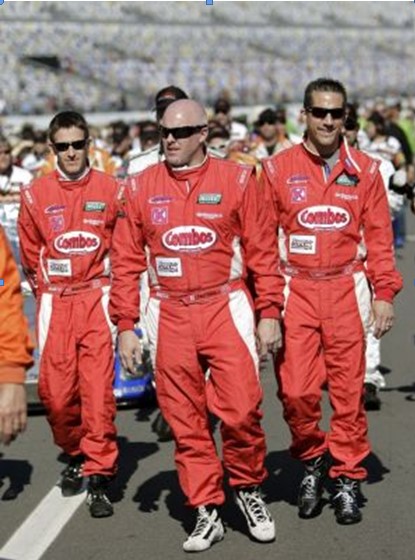 Doran Racing and JLowe Racing have joined to solidify their driver lineup for three additional Grand-Am Series races together, bringing the popular Paul Tracy back following a successful campaign at this year’s 50th Rolex 24 at Daytona. Dr. Jim Lowe will be savoring his third home-track advantage at New Jersey Motorsports Park for the Grand-Am Global Barter 250 on May 12-13, 2012. The World’s Fastest Neurosurgeon will again be co-piloting the #77 Doran Racing COMBOSÂ® Ford Dallara Daytona Prototype with none other than the Paul Tracy.

“I’m really looking forward to getting behind the wheel of the DP car again, this time at a race track I’ve only heard good things about," said Paul Tracy. “I obviously have good history with both Kevin Doran and Jim France from the Grand-Am Series, and the experience at Daytona this year confirms for me this is a racing series that I’d really like to make a push towards for 2013," added Tracy.

Lowe and Tracy formed a great relationship during the 50th Rolex 24 at Daytona, finishing 7th along with Brian and Burt Frisselle, and have been making plans with Doran Racing to partner up again ever since. “I’m absolutely thrilled to race again with Paul Tracy," said Dr. Lowe. “Any red-blooded racer would enjoy having a champion of such caliber as their co-driver whether an endurance race or a sprint event like New Jersey. Working with Paul turned out to be an absolutely enjoyable experience. He is an exceptional guy, fun to hang out with, great to drive with an excellent from a technical standpoint." Lowe has previously participated in the Grand-Am NJMP 250 in 2010 running the 64 JLowe Racing Porsche GT3 Cup in GT Class achieving a Top 10 finish with co-driver Johannes van Overbeek

“It’s great to have PT back in the seat of a Doran Racing car, and we are thrilled to be able to put these additional races together on the Grand-Am schedule," said Doran Racing principle owner, Kevin Doran. “Our objective is to put together a competitive effort that is able to carry-over into something full-time with Paul in 2013, and we are working very hard with current and potential sponsors to make that happen."

Doran Racing will be bring back the popular COMBOSÂ® (Official Cheese-filled Baked Snack of NASCAR) livery to NJMSP, along with new sponsor ‘The Bass University’ a bass-fishing enthusiasts experience created by professional anglers Pete Gluszek and Mike Iaconelli.

The next installment of the series, the Grand-Am Global Barter 250, will be broadcast LIVE on Speed Channel on Sunday, May 13 at 1:00pm.