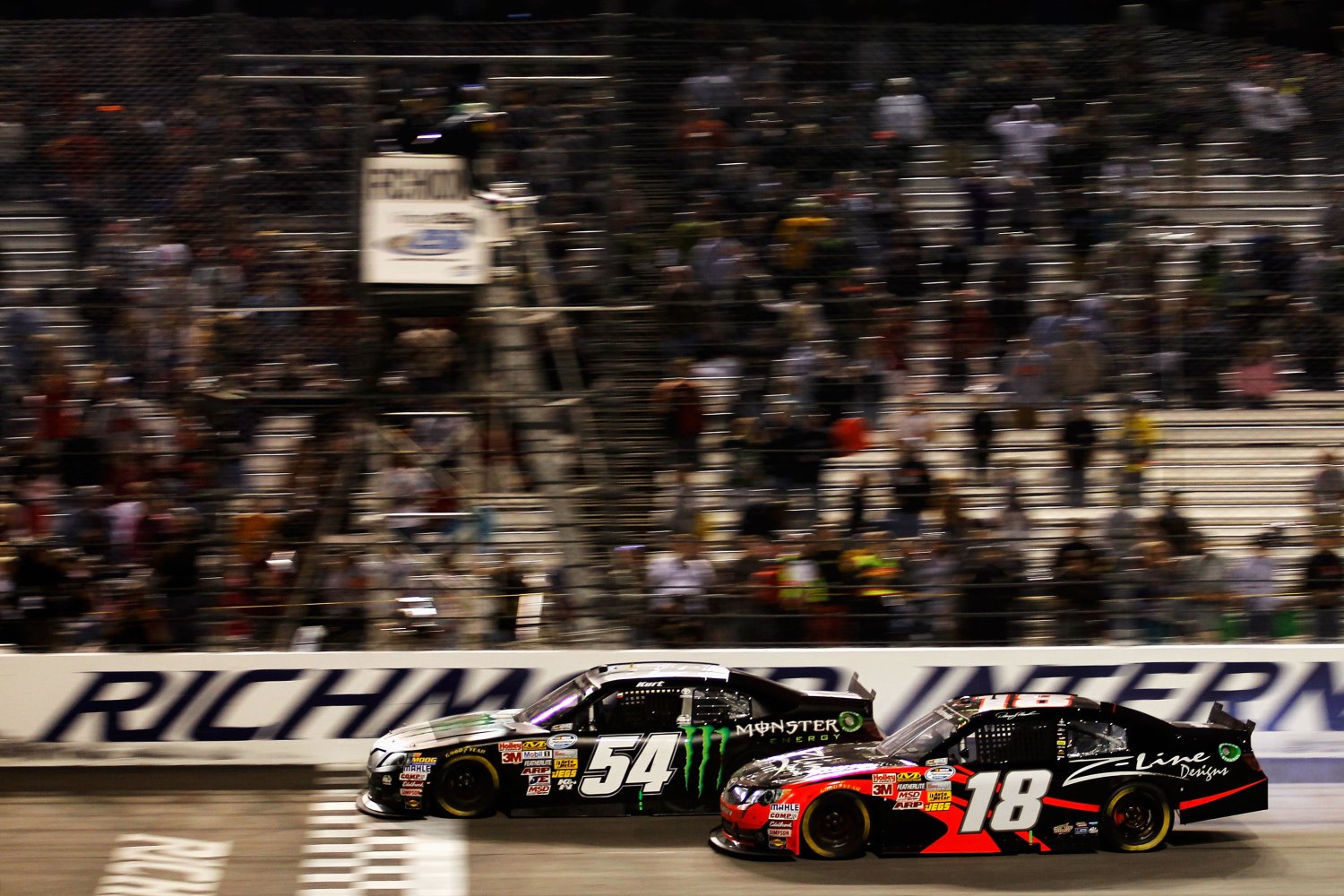 By the thinnest of margins, in a breathtaking finish that featured two cars sideways and side-by-side at the finish line, Kurt Busch beat Denny Hamlin to the checkered flag by .062 seconds to win Friday night's Virginia 529 College Savings 250 at Richmond International Raceway.

Busch delivered the first-ever Nationwide Series victory to the team owned by his brother, Kyle Busch. The win was Busch's fourth in the series and his first on a short track. Hamlin came up two feet short after a phenomenal drive from the rear of the field after a pit road mistake.

"To get KBM [Kyle Busch Motorsports] its first win — this is unbelievable," Kurt Busch said in Victory Lane. "It's harder than you think, putting a program together. You think you can come in here and muscle your way to the top, but you have to think your way to the top."

Busch parted ways with Penske Racing at the end of last season and took a Sprint Cup job with James Finch's Phoenix Racing this year. He and Kyle are sharing driving duties in the No. 54 Monster Energy Toyota in the startup Nationwide program.

"It was unbelievable racing with him," Busch said of Hamlin. "I was pacing myself and pacing myself, and — boom! — he came out of nowhere at the end."

For Kyle Busch, it was difficult to contain the excitement of the first victory with his own equipment.

"This is the most emotional I've ever been for a win," said Kyle, himself a prolific past winner in the No. 18 Toyota that Hamlin drove Saturday night. "Man, this is cool. When you're behind the wheel, it's a lot easier to do. When you're standing here watching the guy behind you close in on you … Kurt ran him really tough, and then Denny ran us clean."

In a race dominated by Sprint Cup drivers Busch, Hamlin and Harvick — and featuring the relentlessly promoted Nationwide debut of X-Games gold medalist Travis Pastrana — the most noteworthy story was the spectacular maiden voyage of 18-year-old Ryan Blaney, who finished seventh in his series debut.

Hurt by three slow pit stops, the last under green, Blaney otherwise would have been a likely contender for the victory in his first Nationwide race.

Hamlin likewise was a victim of a pit road mistake, but one of his own making.

Hamlin missed his pit stall under caution on Lap 117, restarted 24th on Lap 125 and drove up to the third position before pitting under the green flag on Lap 208.

Second soon after the cycle of pit stops, Hamlin harried Busch until the end of the race but ran out of time. Hamlin said he could have moved Busch on the final lap but preferred to have the race decided fairly.

"I could have moved him up and gotten him out of the groove, and it would have been over with," Hamlin said. "But Kyle's a teammate [at Joe Gibbs Racing] and [KBM general manager] Rick Ren and those guys have built a great program, so I wanted it to be fair.

"He won fair and square, and [I was] just one lap too late."