In qualifying for this afternoon's third round of a 12-race Pirelli World Challenge Championships schedule for the GT and GTS classes, Randy Pobst, of Gainesville, Ga., and Peter Cunningham, of Milwaukee, Wis., took their respective class pole positions at the Pirelli World Challenge Long Beach Grand Prix presented by StopTech. The race goes off from a standing start at 4:15 p.m. PT. 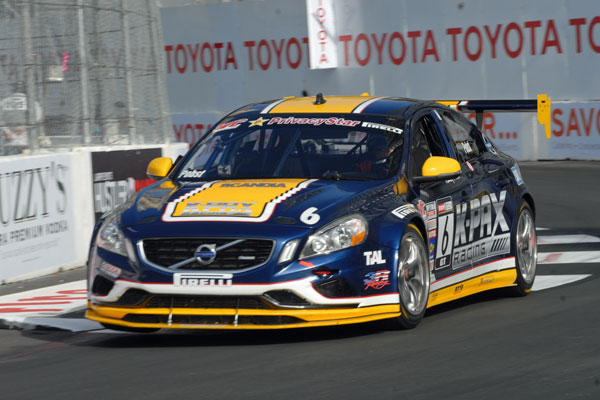 After posting the second fastest time in Saturday morning practice, Pobst managed to find a bit more speed in a somewhat unseasonably chilly qualifying session on the streets of Long Beach. His best lap in the No. 6 K-Pax Racing Volvo S60 was a 1:21.304 (87.140 mph).
"I'm just absolutely thrilled," Pobst said. "It's like Christmas morning and you got that bb gun you were begging your parents for, at least when I was a kid, maybe not anymore. The Volvo has been quite a challenge and K-Pax Racing just never gives up. It's gotten better and better, and my engineer, Will Moody, did some magic tricks and the car was actually rather difficult to drive on the early laps.
"It's relatively cold here this morning and low track temp, so it took a long time to get the confidence and the speed and the car just kept getting better and better and better. I just kept pushing it. I tried a couple of different gears in a couple of corners and it worked out. The speed just kept coming. It's such a feeling of relief and gratitude to the team. It's just qualifying but it just feels good. We had some troubles at St. Pete. We ran well there, and it's great to come back and have the car running so well and get her on the pole right in front of the Long Beach crowd. I am just thrilled."
Joining Pobst on the front row for this afternoon's standing start will be Andy Pilgrim, of Marina Del Rey, Fla., in the No. 8 Cadillac Racing Cadillac CTS-V. Pilgrim posted a best lap at 1:22.017 (86.382 mph) to qualify one spot ahead of his teammate, Johnny O'Connell.
"It's a great position for both of us, 2-3," Pilgrim said. "We were hoping for top five. We thought we could put a couple of good laps together. It's going to be hard to keep that pace up with the heavier cars. It's a very tight, twisty track, but hey, we're starting up front. That's not bad. It's really good. I'm really happy. Cadillac did well."
GT points leader O'Connell starts third on the strength of a lap at 1:22.124 (86.270 mph) in the No. 3 Cadillac Racing Cadillac CTS-V. Dave Welch, of Bothell, Wash., qualified fourth in the No. 77 GoPro/StopTech/Eibach/425 Motorsports Ferrari F430 GT.
Lawson Aschenbach, of Darnestown, Md., starts fifth in the No. 1 Privacy Star/Entrust Porsche 911 GT3. Aschenbach – who was quickest in Saturday practice and heads into the race this afternoon looking for his second straight GT victory after winning Race 2 at St. Pete – posted a best lap at 1:22.464 (85.914 mph).