Steady rains for much of the day produced wet track conditions for Pirelli World Challenge Championships practice, despite the fact that the sun made its first appearance of the day shortly before the session started and shone brightly throughout the 30 minutes. As a result of the conditions, many drivers elected to forego the session. 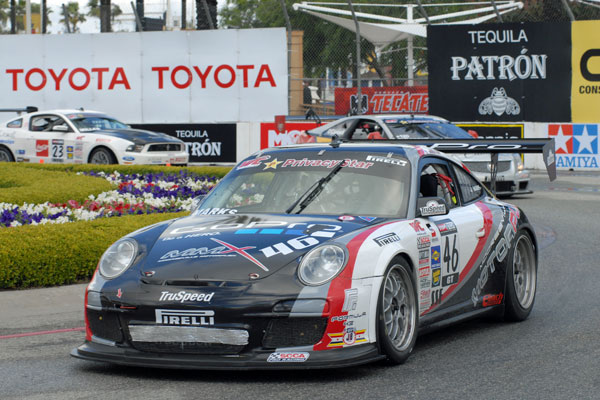 Marks, who is making his first appearance at the Long Beach street circuit, wasn't one of those drivers. Driving the No. 46 GoPro/Mooresville Motorplex Porsche 911 GT3, Marks stood atop the time charts for much of the session and consistently lowered his time. His best lap was a 1:31.504 (77.426 mph).

"I've never been here before, so I had to go and just run that session hard," Marks said. "There wasn't really anybody else out there. A lot of guys just didn't have the need to run it, but I've never been here so I had to. I ran the whole session. I never came in. I ran it start to finish as hard as I could, and that just lent itself to getting a fast lap. It's not really indicative of anything for the weekend. It was just the fact that I needed some laps. When we come back tomorrow morning and everyone is out there, then we'll get a real indication of where we're at."

Second quickest was Marks' TruSpeed teammate, Tomy Drissi, of Hollywood, Calif. Drissi posted a best time of 1:33.573 (75.714 mph) in the No. 47 The Three Stooges The Movie Porsche 911 GT3. However, Drissi's session ended a bit early due to right front suspension issues. 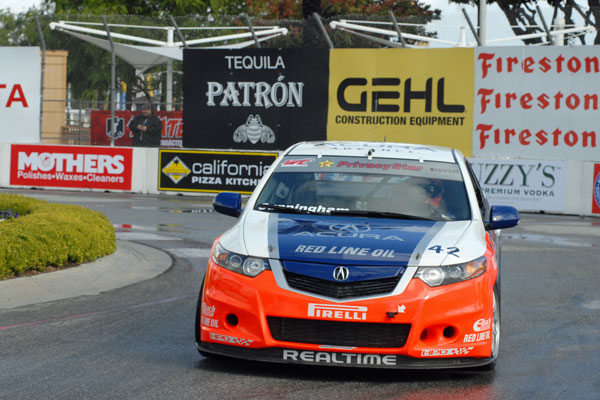 The GTS session saw a familiar name at the top of the time sheet as Cunningham logged a best lap at 1:38.277 (72.090 mph) in the No. 42 RealTime Racing/Acura/HPD Acura TSX. Like Marks, Cunningham downplayed the significance of leading the session with improved weather conditions expected for the remainder of the weekend.

"That session being mostly wet doesn't really mean anything if the weather forecast shows that it's going to be Chamber of Commerce weather tomorrow and Sunday, but it was fun to get out there and see how the Pirelli wet tires worked," Cunningham said. "We stayed on them for a couple laps and then switched to drys. There were some parts of the track that were very dry and other parts that were not. I was just kind of getting the feel for it, not taking any risks or anything. The Acuras are going to do well in those conditions, I think, but the rest of the weekend is what counts. We're all set and excited to be here."

Saturday's schedule at the Pirelli World Challenge Long Beach Grand Prix presented by StopTech includes a practice session from 7:15 to 7:45 a.m. PT and an all-driver autograph session from 12:00 Noon to 1:00 p.m. PT.

Sunday's race goes off from a standing start at 4:15 p.m. PT. The race will be available via live webcast beginning at 7:00 p.m. ET on www.world-challengetv.com. NBC Sports Network will televise the race at 3:00 p.m. ET on Sunday, April 29.