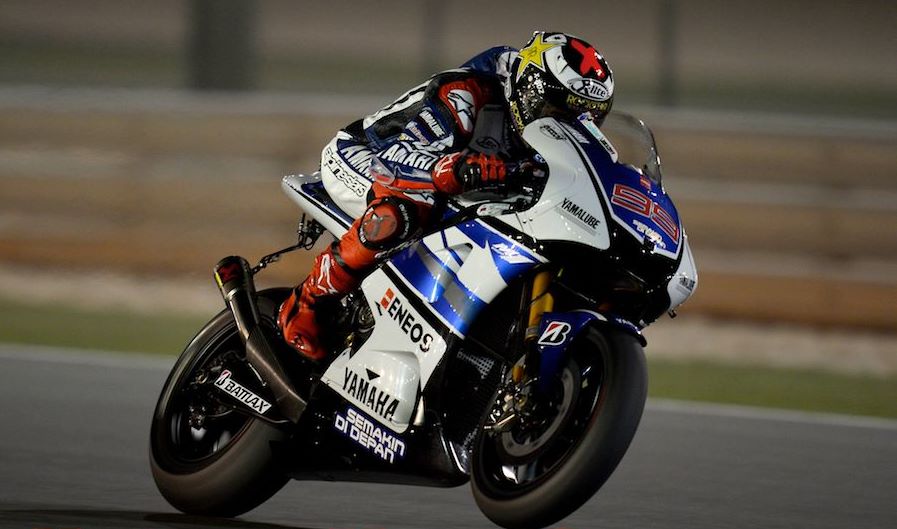 Yamaha Factory Racing rider Jorge Lorenzo made his 2012 intentions clear tonight scoring a scorching pole position at the Losail circuit for tomorrow’s Grand Prix of Qatar. The 2010 World Champion was on top form, pushing his YZR-M1 to the limit, taking full advantage of Bridgestone’s softer compound tire to put himself 0.221 seconds clear of second place rider Casey Stoner. Lorenzo was also delighted to be joined on the front row by fellow Yamaha rider Cal Crutchlow.

Teammate Ben Spies had also been delivering impressively quick laps on the softer tire and was on target for a front row start until a fall minutes from the end of the session. The Texan was unhurt and walked away but had to settle for fourth and a second row start for tomorrow’s race with a best lap time of 1’55.512, 0.878 from pole.

World Champion Casey Stoner will start the Grand Prix of Qatar from second place. It was a frustrating session for Casey who was once again plagued with chatter issues on his RC213V. He led for the majority of the session but in the end took second place with a 1'54.855 just 0.2 seconds off Yamaha's Jorge Lorenzo.

Jorge Lorenzo Position 1st 1.56.634
“I am really happy with tonight’s result. I had to push more than 100% to make pole position but I pushed to the limit and managed to make a perfect lap. We still have to improve the power on the straight and our maximum speed but in the rest of the track the bike is working really well. Tomorrow will be a tough race and tires will be very important I think. A big thank you to Yamaha and my team for giving me such a good bike!"

CASEY STONER 2nd 1'54.855
"I'm not really happy with how qualifying went for us, it should have been a lot better especially on the soft tire which we hadn't used all weekend. Last night we were happy with what we had improved and with the set up in general. Then tonight we tried to improve that set up and we just made it worse and worse. In the end we did a full circle and came back to what we had on Thursday night and we have huge chattering problems again. Now we have a lot of work to do to understand what's gone wrong and where the problem is before tomorrow. If we can make a big step forward in warm up then we can challenge for a podium and maybe fight for the win, but if the bike remains as it is at the moment, then we were going to be in for a long hard race".