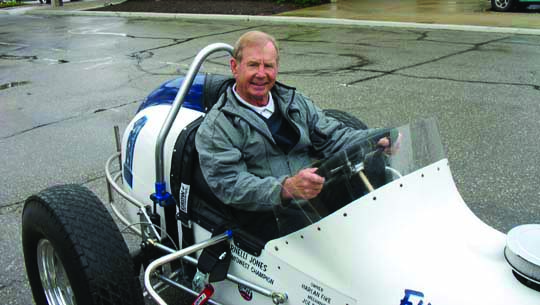 It was once said that, if it had wheels, Parnelli Jones could take it to Victory Circle. Few, if any, racing drivers were as versatile and successful as Jones, whose family moved to Torrance from their home in Texarkana, Ark., when Jones was a youngster.

When he was 17 years old, he participated in his first race – for jalopies – at Carrell Speedway in Gardena, then graduated to sprint cars, winning the Midwest Region sprint car title in 1960.

Jones competed in his first Indy car race in 1960 at Milwaukee and a year later was voted co-Rookie of the Year at the Indianapolis 500. In 1962, he won the Indy 500 pole, then repeated the feat the following year, going on to win the race and six other Indy car races.

In 1967, he and the late Vel Miletich established the Vel’s Parnelli Jones Racing Team. With Al Unser at the wheel, the team won the Indy 500 in 1970 and 1971, three straight national championships and 53 Indy car races with Unser, Mario Andretti and Joe Leonard driving.

Jones has an especially strong Long Beach connection. In 1975, Andretti and Unser each drove team Lolas in the Formula 5000 race at the first Long Beach Grand Prix. The Jones/Miletich team competed in Formula One from 1974-76, and in 1976, the team’s only appearance here, Andretti finished 15th behind winner Clay Regazzoni.

And, to top it all off, Jones competed eight times in the Toyota Pro/Celebrity Race here, winning the overall race in 1980 and capturing the Pro Division in 1989 and 1991!

“Parnelli Jones has been a part of the Toyota Grand Prix of Long Beach fabric virtually from its very beginning," said Jim Michaelian, president and CEO of the Grand Prix Association of Long Beach. “We are grateful for his many contributions to the event and our sport, and honored to have him as our Grand Marshal Grand at America’s #1 Street Race."