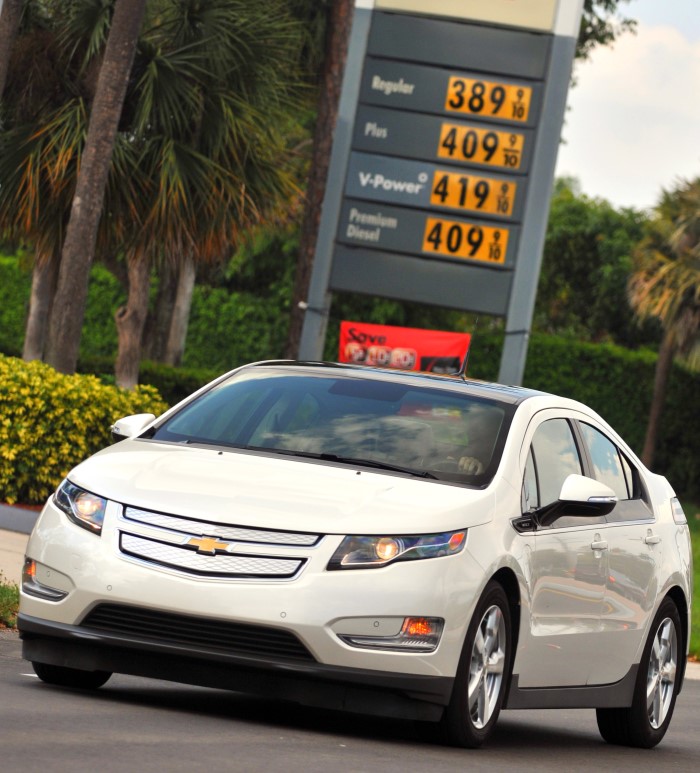 Ever since it became known that the plug-in hybrid car's batteries had burst into flames after government crash tests, the Volt has become the whipping boy of Republican politicians. Conservatives have equated General Motors Co.'s Volt with everything from government bailouts to radical left-wing environmentalism.

"Although we loaded the Volt with state-of-the-art safety features, we did not engineer the Volt to be a political punching bag," GM CEO Dan Akerson said during a Congressional hearing on the Volt in January. "And that, sadly, is what the Volt has become."

Republican presidential hopeful Newt Gingrich faulted the Volt for its lack of space for a gun rack. Front-runner Mitt Romney called it "an idea whose time has not come." American Tradition Partnership Inc., a conservative group, referred to Volts as "exploding Obamamobiles."

Akerson said all the trash talk about the Volt has been pinching sales. Obama's challengers, though, see it as an effective way to resonate with their voters.

Republicans buy Silverado pickups and other Chevrolets in greater numbers than Democrats do, said Art Spinella, who studies new-vehicle buyers as president of CNW Marketing Research in Bandon, Ore.

While Chevy customers tend to lean conservative, less than 14 percent of Volt buyers so far this year identify themselves as Republicans while about 53 percent call themselves Democrats, according to CNW survey of 1,416 people. Buyers of the Chevrolet brand as a whole were 37 percent Republican, 22 percent Democrat and 41 percent independent.

Politics aside, Volt sales have been a source of disappointment for GM. The Environmental Protection Agency gave it a 95 mpg rating for city driving, less than half the 230 mpg rating GM had anticipated in 2009.

After the battery fires became public in November, 2011 sales fell short of Akerson's goal and following slow sales in January and February, GM decided to stop making the cars for five weeks. While the government's investigation found the Volt to be as safe as other vehicles, they are complicated and expensive for a small car at nearly $40,000 before a federal tax credit.

It's impossible to know to what degree political rhetoric is hurting Volt sales, but Akerson isn't alone in believing the numbers would look better without the Republican bashing. Chevrolet dealers in the U.S. sold 7,671 Volts last year, missing GM's target of 10,000.

About 1,600 Volts were sold in the first two months of the year, a pace that doesn't match Akerson's plans to deliver 45,000 in the U.S. this year. At least part of that gap is a result of attacks on the campaign trail, Spinella said. Buyers from the political center to the right, "will not buy a car that has anything at all that they perceive being associated with the administration," Spinella said.

While the Volt accounted for less than 0.1 percent of the world's largest automaker's sales last year, it is getting heightened attention because "it's a hallmark car," Akerson told reporters in San Francisco this week. After the announcement last week that work would stop for five weeks at the Detroit-Hamtramck plant where the Volt is made, Reince Priebus, chairman of the Republican National Committee, posted on Twitter about it with the hashtag "#ObamaonEmpty."

The Volt, introduced a month before Obama said he would run for president, can go more than 30 miles on electricity before its gasoline engine kicks in and powers a generator to recharge the battery. The car has a range of 379 miles with both electric and gasoline power combined.

Bob Lutz, the former vice chairman at General Motors who helped develop the Volt, said he's angered that the car has become politicized.

"I don't mind criticizing Obama, I don't mind criticizing the Democrats and, you know me, I think global warming is a huge hoax perpetrated by the global political left," Lutz said. "But when it comes to starting to tell outright lies to advance your political purposes and damage an American company that is greatly on its way back, hurt American employment in Hamtramck, Michigan, I just think it's totally outrageous."

Lutz, a Republican, said he voted for former U.S. Sen. Rick Santorum in the Michigan Republican primary in part because former Massachusetts Gov. Romney wrote an opinion piece in The New York Times in 2008 headlined "Let Detroit Go Bankrupt" about his opposition to a GM bailout.

After President George W. Bush extended emergency loans to GM's predecessor, Obama's administration managed its $50 billion bailout. The U.S. still holds 32 percent of the GM shares, which have gained 26 percent this year after falling 45 percent in 2011.

Obama has embraced the Volt's fuel-saving technology and said it's his choice for a new car once he's no longer president.

"It was nice," he told a UAW audience on Feb. 28 about sitting in one. "I'll bet it drives real good. And five years from now when I'm not president anymore, I'll buy one and drive it myself."

U.S. Rep. Mike Kelly, R-Pa., who owns a Chevrolet dealership in Butler, said he doesn't sell the Volt at his store because it's too expensive for his customers, who would be better served with a cheaper Cruze. While it may be an engineering marvel, it's too far out for his customers, he said.

"It's still just not a viable alternative to the market that I serve in western Pennsylvania," he said. "I just don't have people coming in to buy that car."

The Volt not only personifies the bailout for Republican candidates, it also plays to other controversial issues such as class and environment. On the campaign trail, for example, Gingrich, the former U.S. House speaker, has peppered his stump speech with comments about the Volt, including during a stop Feb. 17 caught by C-Span.

"The average family that buys it earns $170,000 a year and this is Obama's idea of populism and in his new budget he wants to increase the amount given to every Volt buyer to $10,000, which is an amount which would allow a lot of people to buy a decent secondhand car but it wouldn't be an Obama car," Gingrich said to cheers in Peachtree City, Ga.

"But here's my point to folks: You can't put a gun rack in a Volt. So let's be clear what this election is all about," Gingrich continued. "We believe in the right to bear arms and we like to bear the arms in our trucks."

The Volt "can do a lot of things," including tote a gun rack, responded Selim Bingol, vice president of GM's global communications, on a company blog. "But if you are looking for a vehicle for your next hunting trip, it may not be your first choice." Autonews/Bloomberg