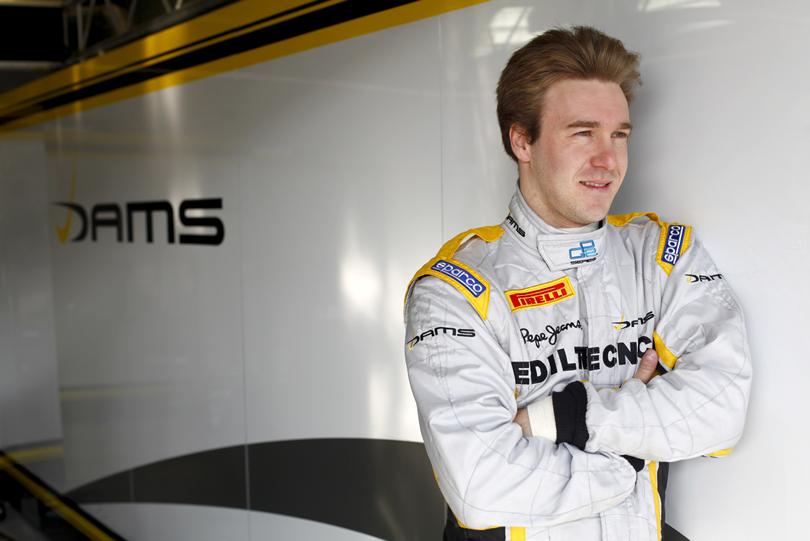 Davide Valsecchi was quickest again today in Jerez in an eventful test session. The DAMS driver set his best lap time of 1:25.567 early in the day. His closest rival, Stefano Coletti, ended one tenth behind the Italian.

For the final day of testing it was James Calado at Lotus GP who set the early pace but his time was soon bettered by Giedo van der Garde who clocked 1:26.053, a mere two hundredths quicker than Tom Dillmann testing at Rapax today. The proceedings were stopped thirty minutes into the session after a piece of curb came away from the track. As it took approximately 45 minutes to repair, since the day’s schedule was to run from 9am to 12pm, with a one hour break and then run again from 1pm till 4pm, it was decided that the session would run without any break until 4pm.

At the restart, Davide Valsecchi quickly topped the timesheets and was the first driver to break the 1m26s. He was soon imitated by Max Chilton, van der Garde, Marcus Ericsson and Coletti. Another red flag interrupted proceedings after Esteban Gutierrez stopped in the gravel bed at Turn 1. Minutes after the track went live again, Fabrizio Crestani caused another halt after he lost control of his Venezuela GP Lazarus car.

The session was green flagged again and Coletti pushed to close the gap with Valsecchi and moved up to P2, one tenth behind the Italian. A fourth red flag brought caused the session to have another enforced break: Fabio Leimer stopped at Turn 1 in the gravel. When the track went live again, Gutiérrez was quickly on the pace and moved up to P3.

The remainder of the day ran smoothly as teams readjusted their programs to the new schedule. Most drivers did race simulations along with pitstop practices. A final red flag stopped proceedings fifteen minutes before the end of the session after Kevin Ceccon lost control of his Ocean Racing car. Valsecchi retained P1 at the checkered flag ahead of Coletti, Gutiérrez, van der Garde (who with 96 laps covered the greatest distance today), Chilton, Ericsson, Dillmann, Calado, Nigel Melker and Jolyon Palmer.

This concluded the first three-day pre-season test. Next week, the GP2 paddock will set up camp in Barcelona for the last test session before the opening round of the 2012 season in Sepang, Malaysia. The twenty-six cars will run for three days at Circuit de Catalunya from Tuesday to Thursday.