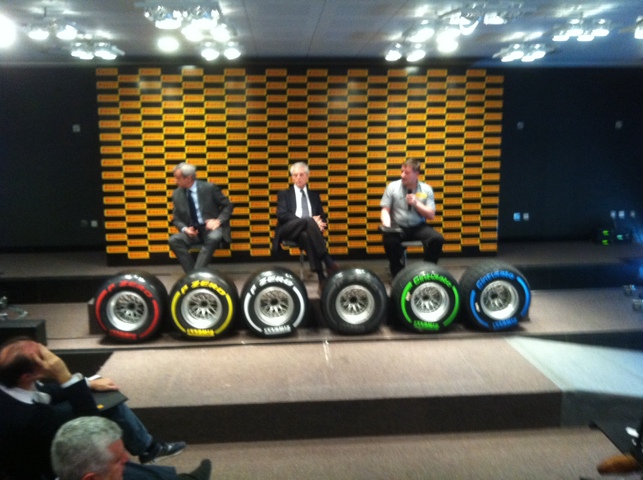 Pirelli has gathered a large number of media in Abu Dhabi to talk about F1 tires. This is a hard sell to a news world besotted with Johnny Depp and Vanessa Paradis. Tires are black, round, rubber things which even boffins have trouble understanding. Ferrari had so much trouble understanding them last year that they have hired a Japanese man (from a company that one should not mention in a world of Pirelli people) In order to help them understand these mystical racing devices.

Tires are an integral part of the sport, but in order to get column inches there usually needs to be a competition between two tire companies. With F1 having just one tire supplier this is impossible and so Pirelli has tried to make tires a talking point by making them aggressive compounds and giving teams a choice of two compounds for each race – and they have to use both. In essence that is the story. They can change the compounds from year to year, and circuit to circuit.

The main story this year is that the tires will be “squarer" than previously. This may sound a little Flintstonian, but it means that the tires should have more stable contact patches, which should reduce the blistering by spreading the temperatures more evenly. It also means that the tire markings are going to become bigger and easier to spot. In addition the name Cinturato is to make a comeback. The Cinturato brand was used in F1 in the 1950s. It will now be used for the wet and intermediate tires. The wet tires will be blue-coded and the intermediates will be green.

Pirelli says it intends to use the brand to promote greener, more environmentally-friendly tires.

As last year there will be four slick tire compounds in F1: supersoft, soft, medium and hard. All but the supersoft are new softer compounds and all tires will have the new profile. The aim is to provide teams with more grip and a longer performance peak, while also closing the performance gap between them. Each tire will have its own “passport" so that Pirelli will have a virtual database to provide information for future tire designs.

Pirelli says that it will supply 45,000 F1 tires this year. Joe Saward