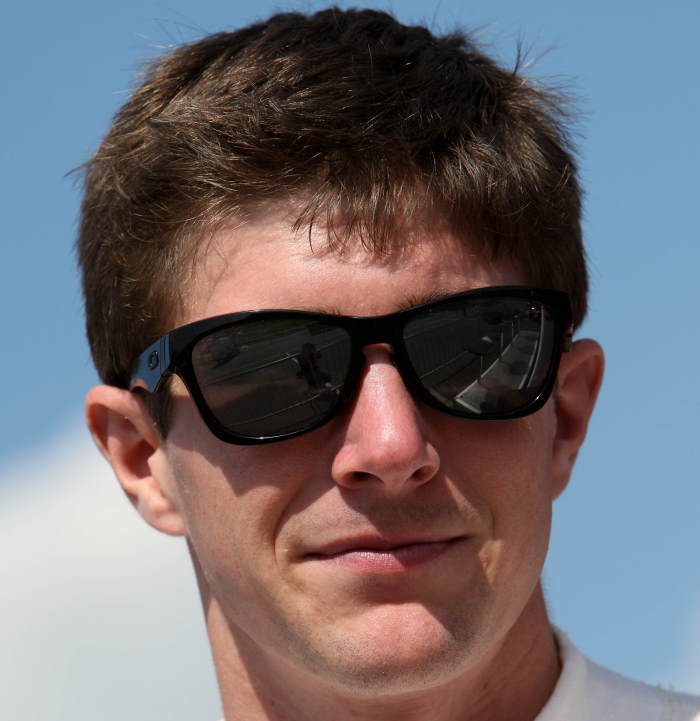 JR Hildebrand was among the IndyCar drivers at the North American International Auto Show Friday to promote the Chevrolet Detroit Belle Isle Grand Prix, which will be held June 1-3, a week after the Indianapolis 500.

One of Hildebrand's Panther Racing owners will be busy this weekend when Jim Harbaugh will be guiding the San Francisco 49ers in the NFC championship game against the New York Giants.

Harbaugh has been part owner of Panther Racing since his playing days with the Indianapolis Colts in the mid-'90s. He attended multiple Indianapolis 500s to watch his drivers, but missed last year's race when Hildebrand — then a rookie — crashed on the final turn while leading the race.

Does Hildebrand have nightmares about that finish?

"No, I've never had nightmares," he said. "When I grew up racing mountain bikes and BMX bikes it was all about going fast. What went down at the end of the Indianapolis 500, obviously you want to win when you're in that position, but I'm just glad we came in second like we did by going for it.

"It's just one of those things, you talk to veteran guys and they said it doesn't happen in practice when you have a car going 50 miles slower than you in the middle of the corner on the racing line. In hindsight, maybe I could have backed up sooner had I known the car was going that slow, but it's something you just don't expect. Even when cars are going into the pits, they're still flat out around Turn 4 before they peel off."

There have been a lot of changes in the IndyCar series since the tragic death of Dan Wheldon in the season finale at Las Vegas. In past years, IndyCar was a spec Dallara-Honda series. Now, Honda will be joined by Chevrolet and Lotus.

Wheldon, who won last year's Indy 500, was the test driver of the new Dallara chassis and the new car will be called the DW12 in his honor. New safety features have been added with the wheels enclosed in the back end, along with the addition of 2-inch high-density foam underneath the driver to lessen the impact on hard collisions.

"We just came back from our first team test," said the 24-year-old Hildebrand, who had a practice run at Sebring, Fla, this week. "Everybody got their first shipment of cars at the end of December. It went well. The engine ran great the whole time. There are a lot of things new for everybody.

"I noticed two big changes. We're running turbo-charged engines so they have more top-end horsepower where it changes the driving style, kicking you back in the seat once it all picks up and gets going. They purposely kept the motors fairly small (2.2 liter, turbo V6) to be more relevant to street cars. The other thing that's different with this new car from the previous generation is we are running carbon brakes on the road courses this year so the braking performance of the car at end will be much better. They are sort of grabbing and powerful so you have to get a feel for it."

Hildebrand is excited about his first go-round at Belle Isle.

"It's at a great time of the year, carrying momentum from the Indy 500," Hildebrand said. "It only makes sense to race (in Detroit) since you have more manufacturers now. I grew up in a Chevy family so it's cool to be working with Chevrolet."

Hildebrand, who finished 14th in the points, said Chevrolet teams have worked together to get the most out of the engine.

"Chevrolet has taken more of a collaborative approach with their race teams, as they do in NASCAR where all the Chevrolet teams have been working together at all the tests," Hildebrand said. "All of the engineers at Andretti Autosport, KV Racing, Penske and Panther have been at each of the preseason tests, whereas Honda has taken a different approach, having Ganassi do everything."

Hildebrand's team has another test planned at Sebring in a couple of weeks before heading to Barber Motorsports in Alabama before the March 25 season opener at St. Petersburg, Fla. Detroit News