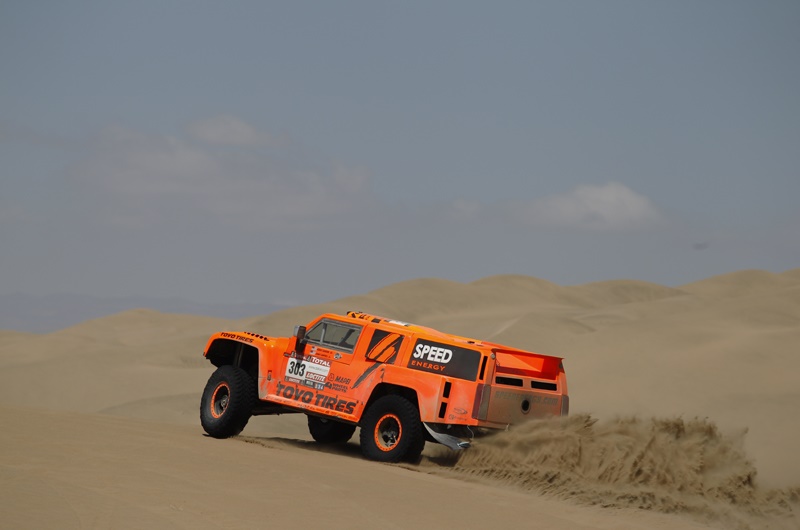 America's Robby Gordon scored a convincing victory in the 12th stage of the Dakar Rally in Peru Friday.

Gordon, driving a Hummer, finished over 15 minutes clear of Russia's Leonid Novotskiy, in a Mini, with Ginel De Villliers of South Africa (Toyota) in third.

He recorded a time of two hours 14 minutes and 32 seconds for the 245km timed section of the leg from Arequipa to Nasca, much of it over sand dunes and awkward terrain.

Race leader Stephane Peterhansel of France in his Mini lost time by being stuck in the dunes, but came home sixth.

He leads second-placed Nani Roma of Spain, also driving a Mini, by over 20 minutes with two days to go.

NASCAR star Gordon is fourth overall, but faces disqualification for an infringement of the rules on Wednesday's stage which he is appealing.

Peterhansel, who has won the motorcycle section six times, is bidding for a fourth win in the cars and has Roma as his main rival. Third-placed De Villiers is over an hour back in the overall standings.

It was a superb ride from the KTM star, who led home compatriots Joan Barreda Bort, on a Husqvarana, and KTM teammate Jordi Viladoms.

Despres finished fourth on the leg and trails the Coma by one minute 35 seconds overall in a titanic battle.

The new leader was delighted with his performance on the stage.

"It was a difficult day. I set off four minutes after Cyril (Despres) and I managed to catch up with him.

"It's no way near over, because there's another big stage tomorrow," he told the official race website.

"It was a magnificent stage, one of the finest specials that I've ridden on the Dakar over the last few years," he said.

Marc Coma started the stage exactly four minutes behind Cyril Despres on the road, courtesy of finishing two places behind the Frenchman on the previous stage. He successfully closed Despres down over the stage, thus making up just under four minutes and regaining the rally lead. His advantage with two stages remaining stands at a narrow 1m35s.

It was a Spanish 1-2-3 on the stage, with the continually impressive Joan Barreda Bort coming in second and Jordi Viladoms in third.

“It was a difficult day," said Coma. “I set off four minutes after Cyril and I managed to catch up with him. For the entire first part of the special I mainly focused on navigation, because there was absolutely no room for mistakes. After that, I knew that there would be good opportunities to attack in the second part and that’s where I managed to regain ground on Cyril. It’s no way near over, because there’s another big stage tomorrow."

His rival was remarkably upbeat despite losing his lead: “It was a magnificent stage, one of the finest specials that I’ve ridden on the Dakar over the last few years. In sporting terms, I expected that Marc was going to catch up with me and that it wouldn’t be a good day. But it was majestic. I don’t have any regrets, because I attacked throughout the first part. You have to go for broke on this Dakar; it’s not a race where you can play the waiting game. Against Marc Coma, I’m doing battle with an excellent rider. He’s quick and clever. So, I try and find the right pace. Apparently, there are riders in between us, so that’s good news for the start tomorrow."

The dominant Patronelli brothers have been taking it turns to win the stages in recent days, with the rally all but gone to Alejandro with a comfortable overall lead of more than an hour. Today it was Marcos’ turn, 42 seconds ahead of his brother.

Robby Gordon bounced back from losing 1h50m yesterday to mechanical problems by winning the stage by over 15 minutes as he looked to regain some pride. Leonid Novitsky put in his best performance since his stage-opening flash-in-the-pan stage win by coming second, ahead of Giniel de Villiers.

But where was Peterhansel? The Frenchman got his Mini stuck in the dunes for over 20 minutes. Fortunately for him, his nearest rival (and teammate) Nani Roma also got stuck, and as a result he only lost 2m49s of his lead.

“I showed the plug that everyone’s been talking about that gives me all super power and I just proved that Minis are for girls, because we beat them by twenty minutes," said Gordon, referring to the technical infringement he has been accused of making by the race jury.

“It was a great stage, with big dunes and the car’s fast. It’s the same system that the French officials approved one year ago and now they’ve changed their minds. I’m pissed. I’m pissed at Stephane and I’m pissed at Nani for challenging my character about being a cheater and today I kicked their asses. I’m going to prove something every day for the rest of the rally. We’re going to win every special from here home."

Peterhansel said: “As soon as we crossed the first dunes, we went over a crest and behind it was a sink hole, immediately penalising us as we got stuck. Time passed and the minutes seemed long. We lost at least 20 minutes, which meant that we would also lose the lead in the general standings. We cleared some sand and moved the car forward centimetre by centimetre to get out of there. Afterwards, I have to admit I took risks to claw the time back. That was the 50 km where I’ve attacked the most during the whole rally. In the end we caught up with Nani several kilometres from the finish, so he must have had problems too. I’ve been saying for a while that by getting stuck in the dunes it’s possible to lose half an hour. Today we came close to a real setback."

Roma added: “We saw that the sand was soft right away, so we deflated the tyres a bit and I saw that Stephane seemed to be stuck in a hole. A bit later, I inflated the tyres and then it was my turn to get stuck in a hole. In the end, we went through the dunes with very little air in the tyres because one of the tyres came of its rim. I opened the tracks in the dunes and it just goes to show that you also need a bit of luck. At the end, Stephane overtook me, but I’m happy to have finished. I think the rest of the cars will finish very late this evening."

Gerard De Rooy scooped his fifth stage win of the rally as he continues towards the overall win in his Iveco. Teammates Hans Stacey and Miki Biasion incredibly managed exactly the same time, 32 seconds behind their team leader.