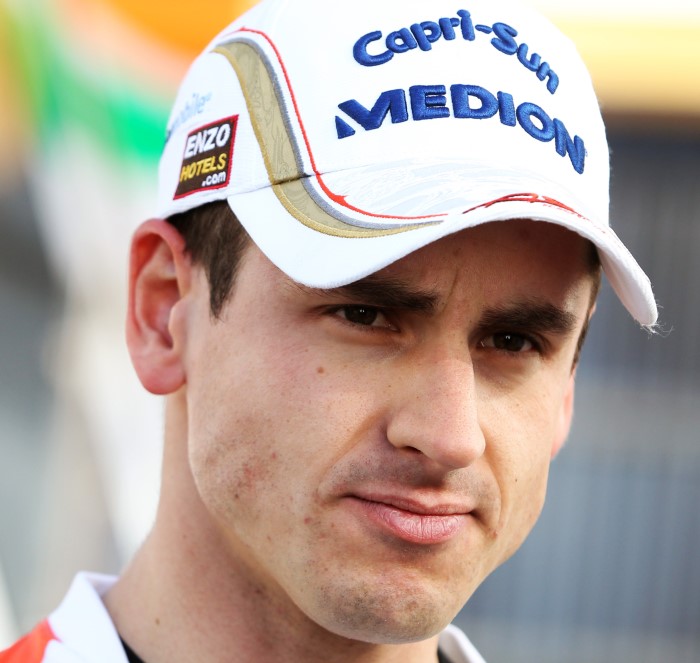 Sutil's F1 career in doubt over nightclub fight
(GMM) Adrian Sutil, and possibly Lewis Hamilton, will be heading to court later this month over a nightclub incident that occurred last April.

German Sutil, who has lost his Force India drive and is reportedly now out of the running for the Williams seat, is accused of cutting Lotus team executive Eric Lux with a broken glass at a post-event party in China.

The 29-year-old, who celebrated a birthday this week, will defend the Munich court's charge of grievous bodily harm, with the Frankfurter Allgemeine Zeitung (FAZ) newspaper saying the prosecution is pushing for a one-year jail term.

The case will begin late this month.

"We are prepared for it," Sutil's manager Manfred Zimmermann is quoted by the SID news agency, "and hope that the matter will be cleared up."

The FAZ report said 2008 world champion Hamilton, Sutil's close friend who was present at the time of the incident, may be called as a key witness.

SID news agency said the timing of the case is "very bad" for Sutil, who is yet to secure a formula one seat for 2012.

Switzerland's Blick newspaper said that because of the incident, the German "could have problems to go back into China" for April's Shanghai race.

But writing in the Telegraph, correspondent Tom Cary said: "It is believed the charges pending against him have ended any chance he had of taking the available seat at Williams."

Chandhok to be paid in 2012 'for a change'
(GMM) 2012 will be a novel season for Karun Chandhok as the Indian prepares to collect a pay-packet.

After two seasons of paying to race with HRT (2010) and serving as Team Lotus' reserve driver (2011), the 27-year-old will actually be paid as he contests FIA endurance sports car races with the JRM team this year.

"For a change, I will get money directly from my team," he confirmed to the Calcutta Telegraph.

"In F1, the money came only from endorsements and not from the team. So it will be nice to race and get paid for it."

Chandhok said he decided to look outside of F1 for 2012 when it became clear he would not find a race seat.

"For the first time in my career, there was no catch to any of the negotiations," he said according to the Hindustan Times.

Chandhok said he is still open to splitting his time in 2012 between his new racing foray and a Friday role in formula one, as only one scheduled date clashes.

"But I'm yet to get into talks with F1 teams," he is quoted by the Times of India. "Now that things are decided I can look at F1 testing options too."

Red Bull to lead 2012 despite new rules – Rosberg
(GMM) Red Bull will continue to set the pace in formula one, according to Nico Rosberg.

With McLaren, Ferrari and even his own Mercedes team tipped to push the reigning champions hard in 2012, German Rosberg said he doubts the blown exhaust ban will slow Red Bull.

"No matter what the rules look like, Red Bull will still be strong.

"They have the expertise, the structure and all the requirements to keep being the best," he added.

But Brackley based Mercedes, heading into its third season since the Brawn takeover, is stepping in the same direction, Rosberg said, ably led by team boss Ross Brawn.

"He knows what we need in order to be the best team," the 26-year-old told Germany's Auto Motor und Sport.

"There were many competent people already who had just not yet grown together properly, while not everyone was sitting in the right places.

"That process has taken place now," he added.

"In Bob Bell, Geoff Willis and Aldo Costa, we also have three new top people on board, and I believe very strongly in Ross. You can feel his ambition," said Rosberg.

Ferrari to decide Massa's future by mid-2012
(GMM) Felipe Massa has acknowledged that a bad start to the 2012 season could cost him his race seat at Ferrari.

Team bosses Stefano Domenicali and Luca di Montezemolo have stated openly that they are looking around at the alternatives should Brazilian Massa – a Ferrari driver since 2006 – continue his sub-standard form this year.

"I am well aware that in some ways, the first part of the season will be more important than the second," the 30-year-old told reporters at Ferrari's pre-season winter event in the Italian Dolomites.

"When we reach the mid-point of the season, we will talk about my future and see what are the chances of continuing to work with Ferrari," said Massa.

Even amid news of his newly broken right leg, Robert Kubica's name is reportedly near the top of the shortlist to succeed Massa — and Fernando Alonso gave the recovering Pole a vote of confidence this week.

"Robert is the best driver around and he will prove that when he returns to racing," said the Spaniard, who was then asked if he can imagine friend Kubica as his 2013 teammate.

Alonso insisted: "I am very happy to have Felipe alongside me."

But the veteran Brazilian will only be there if he is up to speed by mid-season, when Ferrari will make a decision so that Massa has time to find an alternate seat.

Britain's Daily Mail described the Spaniard as being "decidedly tetchy" as he fielded journalists' questions during a press conference at the Madonna di Campiglio ski resort.

Germany's Auto Motor und Sport agreed that in 30-year-old Alonso's "first appointment in the new year, he was unusually uncommunicative".

"Alonso is normally very clear and precise with his information," said the magazine.

Italy's Autosprint described: "The impression was that Fernando had slept badly."

La Stampa added: "Alonso's tone and expression throughout was downbeat, his answers were terse including many 'I don't knows'."

El Pais correspondent Oriol Puigdemont explained: "Alonso's appearance ended earlier than anticipated when the questions ran out, while Stefano Domenicali a day earlier left some questions answered due to a lack of time."

Puigdemont, for instance, asked Alonso how it felt to hear Domenicali's words of praise earlier this week.

"I talk to my boss every day," Alonso fired back. "I do not need to come here to know what he thinks of me."

French commentator Jean-Louis Moncet, in Auto Plus, wrote: "Who knows why he was in a dog's mood, sometimes answering in monosyllables, evading questions.

"I am told he was angry with Spanish journalists, especially those who wrote about his divorce and websites that had written about seeing the 2012 car and saying it was not good."

2012 Ferrari has ugly 'bump' on nose
(GMM) Part of what makes the 2012 Ferrari "not pretty" is a conspicuous bump on its nose, it is believed.

The famous team's bosses Stefano Domenicali and Luca di Montezemolo used descriptions including "not pretty" and "lousy" when describing the physical appearance of the unlaunched new machine, codenamed 663.

"It's not that pretty, because the shape defined by the technical regulations does not leave much scope", admitted Domenicali.

It is believed he is referring to regulation tweaks for 2012 that will reduce the height of the noses, to improve driver safety in the event of crashes.

But the maximum height of the dash bulkhead remains the same, meaning that Ferrari's low nose tapers sharply where it meets the front of the monocoque.

Some sources claim to have seen drawings or images of Ferrari's unnamed 2012 car, but Fernando Alonso on Thursday insisted the car "is quite similar" in physical appearance to last year's contender.

"The rules have been clarified a bit in the last two years with the result that all the cars look more and more alike," Spanish reporters quote him as saying.

Sahara Force India look for a top-three finish in 2012
With fresh funds flowing in and a new driver taking the seat, Sahara Force India are hoping to break into the top-three teams of the 2012 season. Andy Stevenson, team's sporting director believes Paul di Resta and Nico Hulkenberg will be able to deliver despite the pressure on them