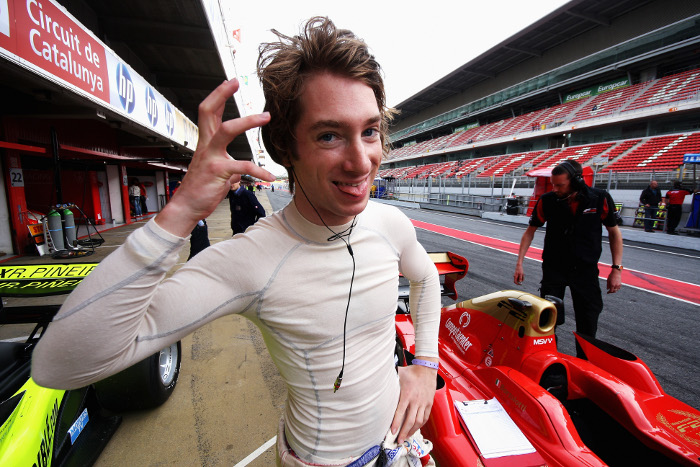 Mirko Bortolotti has taken pole position for today's (Saturday) penultimate round of the 2011 FIA Formula Two Championship in Spain. The 21-year-old Austro-Italian lapped Barcelona's Circuit de Catalunya two-tenths of a second faster than Miki Monras. His compatriot Ramon Pineiro, meanwhile, will start the race from third on his 20th birthday.

Dry but cloudy conditions greeted drivers for the start of the opening qualifying session with 19-year-old Monras setting the early pace lapping in the 1min 38s. Christopher Zanella, hoping to hold on to second spot in the series this weekend, Mikkel Mac and Jack Clarke were all looking quick behind him along with Mihai Marinescu who last time out in Monza secured his maiden victory.

Meanwhile, Bortolotti was biding his time waiting for a clear track, and when it came halfway through the session as the rest of pitted for fresh rubber, he wasted no time in hooking up a perfect lap to go top and remain there throughout.

As this stage Pineiro, who was forced to miss Thursday's test and some of Friday's practice, was only running P12 but he soon moved up into fourth and then finally third at the checkered flag.

With Monras and Pineiro just behind the 2011 Champion, it was German Tobias Hegewald who secured fourth for today's 22-lap race with Marinescu in fifth and Zanella in sixth.

Brit Jack Clarke went seventh fastest although may have gone quicker had it not been for a spin at Turn 10 towards the end of the session. Alex Brundle, Mac and Benjamin Lariche completed the top 10 in a closely fought session which saw the top nine drivers within one second of one another.

Speaking afterwards Bortolotti said: "We took a bit of a gamble today by saving one set of new tires for the race instead of using them during qualifying. The car felt good though and we felt we just needed one run although hoping we didn't get a red flag. I thought it might not be enough for pole as Miki has looked quick all weekend but I'm very happy with pole position and I'm looking forward to the race."

Round 15 gets underway at 14:25 (local time) with live coverage on Motors TV and the F2 website via live streaming.