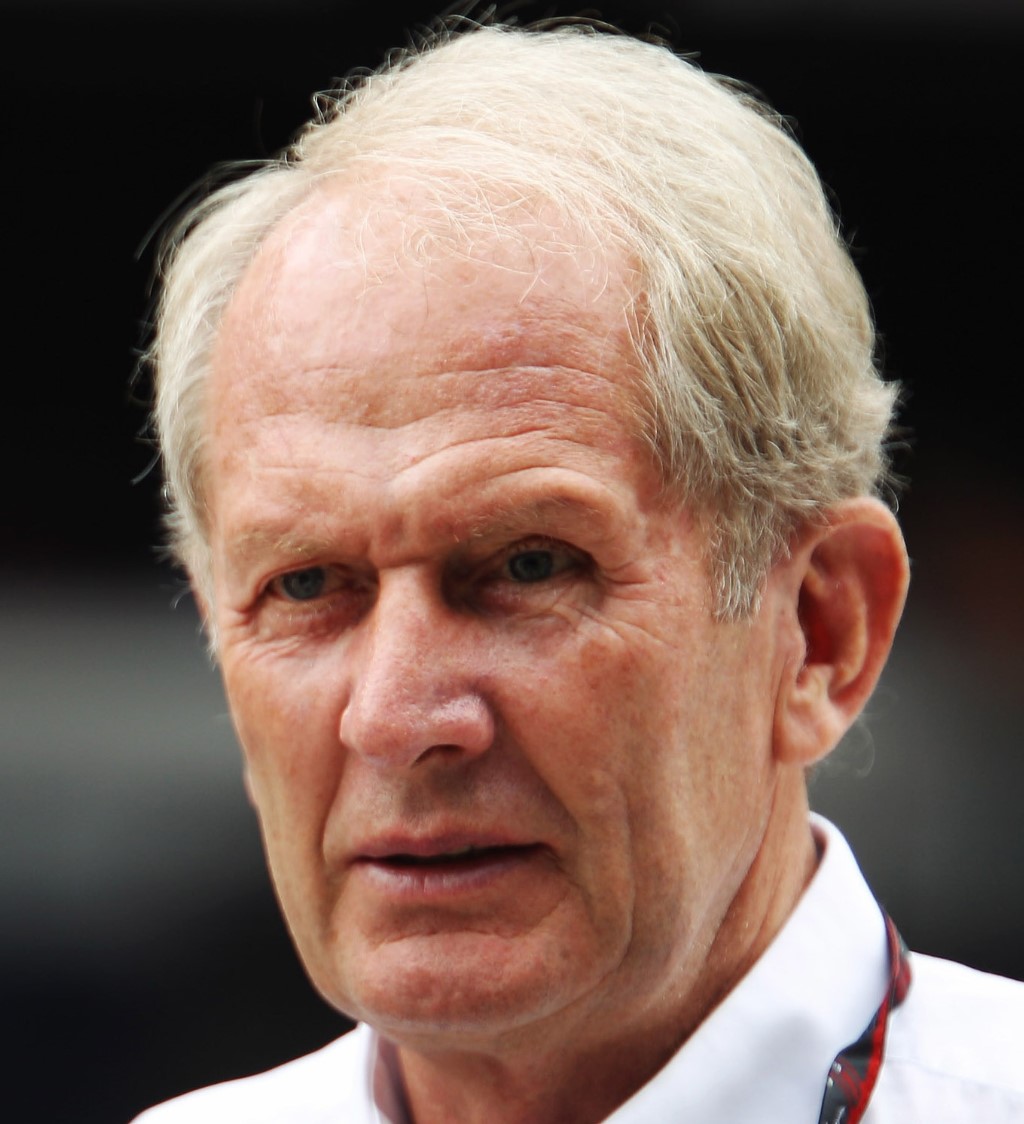 Marko doubts rivals to find 'philosopher's stone'
(GMM) Dr Helmut Marko is confident Red Bull can stay ahead of the pack in 2012.

Sebastian Vettel will almost certainly wrap up his second consecutive title in Japan this weekend, and so the energy drink-owned team already has firm sights on defending its latest championships next year.

In the paddock, however, there is the hope that Red Bull's dominance will be hit by the 2012 banning of blown exhaust diffusers.

"We will let our competitors believe that it is so," team advisor Marko told Germany's Sport Bild.

"But I ask how – if a car is not competitive – can the philosopher's stone be suddenly found?" added the Austrian.

Marko is therefore not expecting any surprises for 2012, after Red Bull had arguably the fastest car in the field for the past three seasons.

But one weakness in 2011 was KERS, he admitted.

"That's why we have had a taskforce set up for some time now," said Marko, "which has been possible due to the more intense cooperation with Renault. We have developed particularly hard in this area."

That is the claim of the French motoring magazine Auto Hebdo, lamenting that "the deal was not concluded".

A brief report on the magazine's website said the plan was for Renault SA, having withdrawn as a team owner after the 2009 'crashgate' scandal, to return to the grid with the Enstone based team that still bears its name.

"Romain Grosjean at Renault GP? With a team that would have resumed its historic colors? We are able to confirm that, yes, it was discussed recently.

"But 'la marque au Losange' chose instead to enhance its presence in F1 with Red Bull, so between Enstone and the French, the gap will now only get bigger," claimed autohebdo.fr.

Slim Webber still pushing to shed grams
(GMM) Although always refusing to write "a shopping list of excuses", Mark Webber has admitted some concern with his racing weight.

The Kolner Express newspaper says there is an 11 kilogram difference between teammate Sebastian Vettel, the 2011 champion elect, and Australian Webber, who has failed to win even a single grand prix so far this season.

"It would be great if the team could find a gram here and there (to reduce the weight of the car)," the tall 35-year-old, who weighs 75kg compared with German Vettel's 64, said.

Webber is not suggesting that Adrian Newey's RB7 is overweight, but rather that any saved weight could be distributed around the car to improve the handling.

He insists he has lost as much weight as he possibly can.

"I have never been as slim as I am," confirmed Webber. "There is nothing more to find from myself. Maybe a haircut …"

McLaren's Lewis Hamilton admits his weight has also been a concern in recent years.

"When Heikki Kovalainen was my teammate, it was ridiculous!" the Briton reportedly said. "He weighs nothing, maybe 60 kilos. So I thought 'I have to lose weight' but I never managed to get down to him."

Suzuka weather 'lovely' after Wednesday rain
(GMM) It rained torrentially on Wednesday, but Suzuka looks set to turn on a warm and dry Japanese grand prix.

24 hours ago, rivers of rain were washing down the sloping pitlane, rekindling memories of 2010 when torrential conditions forced the rescheduling of qualifying.

"But for the weekend no wet weather is expected — except a champagne shower for Vettel's world championship celebration."

Added O Estado de S.Paulo journalist Livio Oricchio: "I saw on TV that the forecast is good for the weekend — at least that's what I understood from the pictures."

Indeed, Thursday at the Honda-owned venue was described on Twitter by the Mercedes team as "lovely".

Observers have been impressed with the 25-year-old's on-track antics so far in 2011 but less so with his low profile and robotic appearances for the media.

But while acknowledging di Resta's unremarkable paddock presence, his manager Anthony Hamilton said he expects the Scot to raise his head once his future is more secure.

Di Resta is in the running to keep his seat at Force India next year, but so too are his current teammate Adrian Sutil as well as Friday driver Nico Hulkenberg.

"I'm extremely proud of Paul, he's so level-headed," said Hamilton, the father of the 2008 world champion and McLaren driver Lewis.

"Yes, he (di Resta) is quiet, but it's what you do on the track that's most important. That's what is most important for keeping your job in F1," he told the Independent.

"There is the constant threat of other drivers with huge budgets, so a driver who is in a team on merit, such as Paul, can lose his seat if he says the wrong things or doesn't perform. The key for him is to say little, but deliver big.

"Once you have established more of a long-term career you can open yourself up a little more. Right now, Paul is in that position where you just have to keep yourself to yourself, keep your head down, and do the job on the track," added Hamilton Snr.

Vettel hits out at fake social media profiles
(GMM) Sebastian Vettel has dealt a blow to his thousands of fans on social media sites Twitter and Facebook.

The reigning world champion told Germany's Bild newspaper: "It's not me. I am not on Facebook or Twitter.

"I prefer to have personal contact with the fans, for example in the autograph signings."

The report said there are more than a dozen apparently 'official' Facebook and Twitter profiles for the 24-year-old Red Bull driver, the most with almost 600,000 fans.

Bild added that Vettel is bidding to have the fake accounts removed.

The fraudulent profiles could explain a rumor earlier this week that Vettel has bought a mansion in his hometown Heppenheim for EUR 1.5 million.

"I looked at the house but didn't buy it," said the German, who lives in Switzerland.

Suzuka from an engine builders view
The opening Free Practice session for this weekend’s Japanese Grand Prix, round 15 of the 2011 FIA Formula One World Championship, gets underway at the Suzuka Circuit on Friday morning.

Cosworth’s Circuit Tracker for the Japanese Grand Prix can be downloaded by clicking the PDF link/icon below.

The ‘Cosworth Circuit Tracker’ takes a look at the Suzuka Circuit from an engine's eye view with more topical insights direct from the race track. Cosworth also details specific metrics that are intended to give an ‘at-a-glance’ look at the demands placed on the engine.

Suzuka Circuit: An Engine’s Eye View
Suzuka is a very demanding circuit for both chassis and engine. Whilst not overly rewarding in terms of power sensitivity, or taxing in terms of fuel consumption, the seemingly continuous flow of corners places demands across the full range of the engine’s power curve.

The turn 11 hairpin is the slowest corner of the circuit. The challenge for the engine here is in accurately delivering the torque requested by the driver on four cylinders, helping the driver to modulate the wheel-slip in the lower gears when grip is limited. Cosworth’s engineers are able to validate that the engine is behaving as expected via an on-board torque sensor.

The S-curves, Dunlop curve, the entry to Spoon and 130R are all highly laterally loaded. The engine’s dry sump system ensures that oil supply will be unaffected throughout, as long as oil can be passed to it from the main tank. The biggest issue is combating surge within this tank – where oil is forced to one side as the car corners. The tank design includes internal baffles to prevent this but surge can still be encountered if the oil level drops low enough. The lower the minimum oil level a tank can sustain through these turns, the better the design of the tank. With this in mind, teams will attempt to start the race with the minimum viable oil level, to save carrying around excess ballast in the form of oil.

From the Race Track
The weather can add a degree of uncertainty to the weekend, as witnessed last year when Qualifying was postponed until Sunday morning due to continuous heavy rain on Saturday. Conditions on Wednesday were similar, but the forecast is predicting better weather for the weekend with little chance of rain affecting running.

The wind direction can be particularly changeable at Suzuka. There have been occasions when a marked change between Saturday and Sunday has resulted in cars sitting in the limiter down into turn 1 during the race. There was a particularly strong tailwind last year and, as both main straights run broadly in the same direction, accurate weather forecasts are vital when finalizing ratio decisions on Friday evening.

The single DRS zone across the start-finish straight means that it will not be possible to select a 7th gear optimized for both straights come race day, but this is no different to any other event. During Qualifying, it will be interesting to see if drivers dare to negotiate 130R and the entry of turn 1 flat with the DRS active.

The circuit undulates appreciably over the course of a lap. Although it is not a major problem, the fact that the car will accelerate differently depending on the local gradient can affect the timing of the shift lights; the rate at which they come on will increase as the car goes downhill, and vice versa. In the lower gears, the difference is so small as to be insignificant. However, in 6th gear the timing is such that it is possible to notice slightly different RPM shift points for the same driver reaction time.
Information provided by David Lamb, Cosworth Senior Engineer

'Hamilton meeting' played down at Suzuka
(GMM) Talk of a special meeting this weekend to discuss Lewis Hamilton's aggressive driving in 2011 was played down in the Suzuka paddock on Thursday.

Multiple reports had said the drivers' meeting with Charlie Whiting would go ahead, but Grand Prix Drivers' Association president Rubens Barrichello and his countryman Felipe Massa – at the centre of the storm in Singapore two weeks ago – indicated it would be business as usual in Japan.

"What's past is past and we need to think about the future," said Massa. "I have no reason to speak to him now about this as the matter is closed as far as I am concerned."

GPDA president Barrichello also played down the incident and suggestions of a special drivers' meeting.

"I'm not saying everything (with Hamilton's driving) is okay, but as far as I'm concerned it would be too unfair to pinpoint this or that," he is quoted by PA Sport.

Asked specifically about the 'special meeting', Barrichello added: "I don't think that's happening. I think someone has made that up."