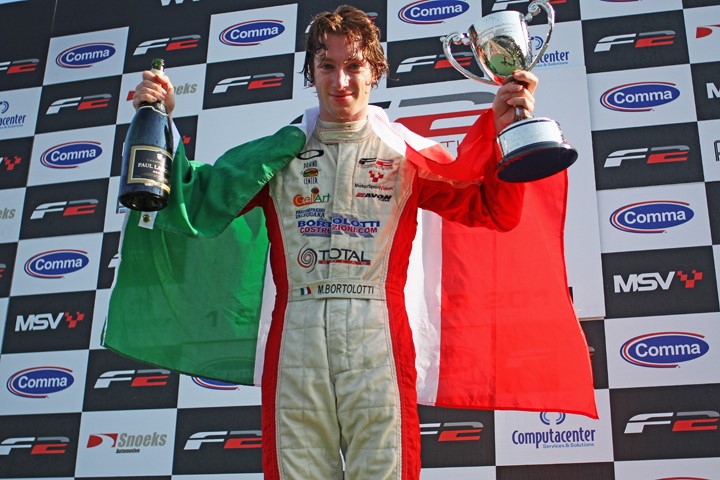 Italian driver Mirko Bortolotti has clinched the 2011 FIA Formula Two Championship in style at the Monza circuit in Italy today (Sunday 2 October), taking a dominant victory in round 14 to secure the title and a prize test drive with the Williams Formula One team.

The 21-year-old secured the F2 title on home soil and with one round of the season remaining, following in the footsteps of 2009 winner Andy Soucek and last year’s champion Dean Stoneman.

As his prize for claiming the Formula Two crown, Bortolotti will earn a full test with the Williams F1 team at Abu Dhabi in November. He will also qualify for an FIA Superlicense, required to compete in Formula One Grands Prix.

Bortolotti headed into this weekend with a 60-point advantage over his nearest rival Christopher Zanella. After a superb second place in race one, he needed just two points from today’s contest, which he started from pole position.

He duly wrapped up the title in dramatic fashion by recording a lights-to-flag victory, his fifth of the season so far, in front of his home fans.

Mirko Bortolotti said: “I don’t have words to explain how I feel right now, I think I have to realize it. I’m just so happy. It’s just amazing for me. I cannot say anything else, all I can say is that we did a good job, the car was perfect and I have to send my congratulations to the whole F2 team because obviously they are doing a great job."

Looking ahead Bortolotti said: “I don’t know what’s going to happen for 2012, we will have see. First of all I have to think about my Williams F1 test, and we’ve got another F2 race in Barcelona too. I managed to win this prize so I will try to prepare myself as best as I can. I had the luck in the past to get some Formula One tests so maybe that could help me but of course everything changed this year so it will be interesting to learn all the new parts that the Formula One car has and try to give the best I can and enjoy the day."

He added: “We will be celebrating for sure! We are in Italy so to win the championship here is obviously a dream come true and for sure I will party tonight!

Jonathan Palmer, Formula Two Series Director, said: “Mirko has done an absolutely superb job this season and is a very worthy 2011 F2 champion. From the opening round at Silverstone, he has shown outstanding talent and pace in a very competitive field and has really dominated since then, sealing the championship with one round still remaining. I am very confident he is going to make a big impression when he claims his Williams F1 test drive in Abu Dhabi, and that F2’s high standard of competition has given him the best possible preparation for the next step in his career."

Sir Frank Williams, Founder and Team Principal, added: “Mirko Bortolotti is another worthy winner of the F2 Championship. We have obviously followed his progress this season and witnessed some impressive performances, including points-scoring finishes in every round and five race wins. We are sure Mirko will learn a lot from the test day he now has with us in Abu Dhabi later this year and we look forward to seeing what he can do in a Formula One car."

The 2011 FIA Formula Two Championship continues later this month with the final round in Barcelona where the fight for the two runner-up spots, where both receive a GP2 test, remains very close.