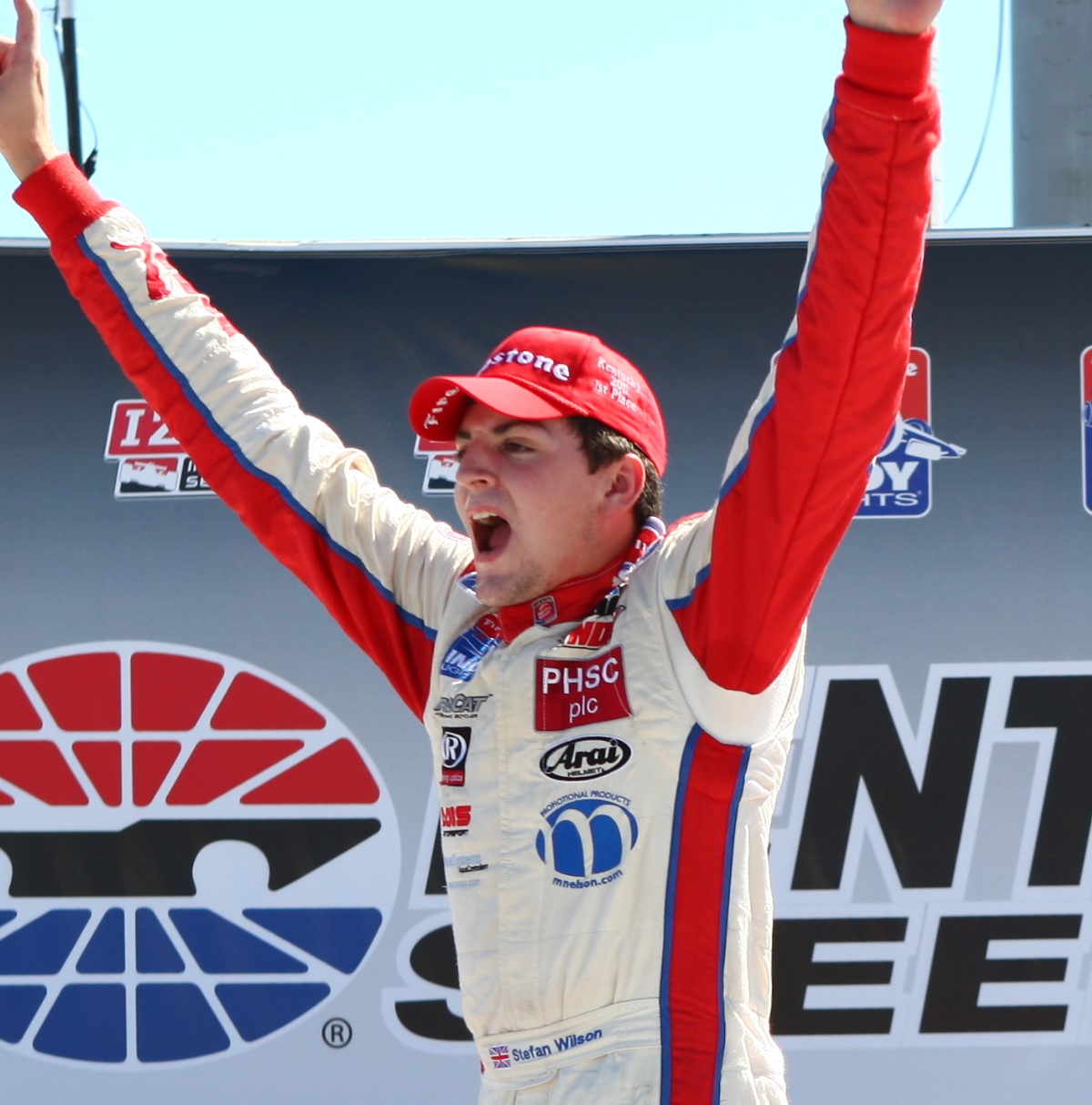 Josef Newgarden clinched the Firestone Indy Lights championship by taking the green flag in the Kentucky Indy 100 at Kentucky Speedway.

Stefan Wilson still has something to shoot for — the championship runner-up — and he took a big step in attaining that goal with a 3.1136-second victory over Newgarden in the 67-lap race on the 1.5-mile oval.

Wilson, who earned his first Sunoco Pole Award a day earlier in the No. 5 Andretti Autosport car, overtook Esteban Guerrieri in the standings with one race remaining in the season.

Jorge Goncalvez finished third in the No. 4 Belardi Auto Racing Special and Brandon Wagner was fourth in the No. 22 TMR-Davey Hamilton Racing entry. Bryan Clauson, who started 11th in the No. 77 Mazda Road to Indy/CURB Records/SSM car, finished fifth.

Guerrieri, along with the cars of Gustavo Yacaman, Anders Krohn, David Ostella and Jacob Wilson, was eliminated in a Lap 1 incident in Turn 2.

STEFAN WILSON (No. 5 Andretti Autosport): "That was just so amazing. The team did a really good job this weekend and gave me a fantastic car and that was the groundwork to me getting this victory. It was an awesome weekend. We got pole yesterday, the first pole of my Firestone Indy Lights career, along with the outright lap record along with the two-lap record around Kentucky and then got the victory today. So it's been an absolute dream. (About the Lap 37 pass of Josef Newgarden for the lead for good) It was just so fun racing with Josef; we're very respectful of each other and gave each other enough room. It was just a fantastic race."

JOSEF NEWGARDEN (No. 11 Copart/Score Big/Robo-Pong/SSM, finished second; 2011 Firestone Indy Lights champion and 2011 Perkin Elmer Rookie of the Year): "It's a big day for the Sam Schmidt Motorsports team. It's very bittersweet for us given everything that has happened over the last few weeks. It's going to be difficult to celebrate this without Chris (Griffis). It certainly gave us a lot of motivation to come here and finish it off right for him. I'm elated for all of the guys. The entire team has worked so hard and they really put a lot into this year. It's a big day for all of them and certainly for the whole team."

JORGE GONCALVEZ (No. 4 Belardi Auto Racing Special): I'm pretty happy, the team did a good job working towards this oval and Vegas, to make third place…I'm pretty happy. This is my first podium in Firestone Indy Lights, and I'm just really happy. I feel really good about my leg, and thanks to the team and thanks to everybody and we'll see you in Vegas.

BRANDON WAGNER (No. 22 TMR/Davey Hamilton Racing): "Things went really well. I thought we had a little more than we showed on track, finishing fourth. The car just kinda had trouble catching up to traffic, when everything gets spread out like that, it's really tough to get everyone grouped up and go faster. Fortunately the car was fast, the restart we kinda of got passed up and fell back to where we shouldn't have been to begin with. The car was good. I wish it was a little better. We'll take fourth place today."

BRYAN CLAUSON (No. 77 Mazda Road to Indy/SSM, finished fifth): "It was a long one. We struggled a little bit. I don't know if was just running after the trucks or what, but we missed it. We had a really good car all day in practice yesterday, and was fastest in both. The car was handling really good in the draft, but today it wasn't good at all. The last five or 10 laps it kind of came back to us and we got going again. We even picked up quite a bit on lap time, which is hard to do when you're running wide open. We're going to have to go back and look at the data and see where we missed it."

ESTEBAN GUERRIERI (No. 7 Lucas Oil/Sam Schmidt Motorsports): "He was quite shaky in the rear and then lost it coming into Turn Two, so I had no way to avoid him because he was in the middle of the track, so I hit him and we went close to the top of the racetrack and collected the other cars. It's a shame because there were only 13 cars to start with and to lose five in the first lap is not good. But at least we are in good shape, good physical shape, no big problems so, let's get ready for the next one."

DAVID OSTELLA (No. 16 Global Precast Team Jensen): "I think I ran into them and just lost it, you know, cold tires and all I saw was smoke. Gustavo was slowing down on me and so it was all chaos. I think I might have run into Gustavo and I feel bad for doing that then that happened and I went into the wall. I saw on replay that I almost flipped a car, and it's not what you want in a race, especially not on the first corner. But there's still one more race go, it's a big one in Vegas. So we'll just look forward to that and be positive about it, and we'll get the car together again."

JACOB WILSON (No. 19 Belardi Auto Racing):" It just came around on me. I didn't expect it. It felt good coming around Turn 1 and then snapped around coming off of Turn 2. We caught quite a few other guys. I'm really not sure. It just stepped out on me. I didn't expect it to come around there. I just hate to ruin anyone else's run. I'm fine but the car is not. It's just a bad deal."

GUSTAVO YACAMAN (No. 2 TMR/Tuvacol/Xtreme Coil Drilling): "We saw the Belardi car just lose it on the bottom taking with him Esteban, I checked off and I was going to avoid him until someone hit me from behind, and I don't know what happened after that. "

ANDERS KROHN (No. 9 Liberty Engineering Racing Special): "I think initially we had a great start in the race with the No. 9 Liberty Engineering Belardi Auto Racing car, we ewre going around the outside and just gaining spots, and suddenly I see alot of smoke and then there's only so much you can do. I saw a gap on the outside and then unfortunately I think the No. 2 car just came around so fast and collected me into the wall, so…2011 so far has been all about being unfortunate and today is a continuation of that. It's just a shame because Belardi Auto Racing had been so strong this weekend, all three of us, had a chance to be on the podium and it's a shame when we get taken out in Turn One and don't even get to show our potential. I'm just really sad for the guys and there's alot of repair stuff to do."

Results Sunday of the Kentucky 100 Firestone Indy Lights Series event on the 1.48 mile Kentucky Speedway, with order of finish, starting position in parentheses, driver, laps completed and reason out (if any):