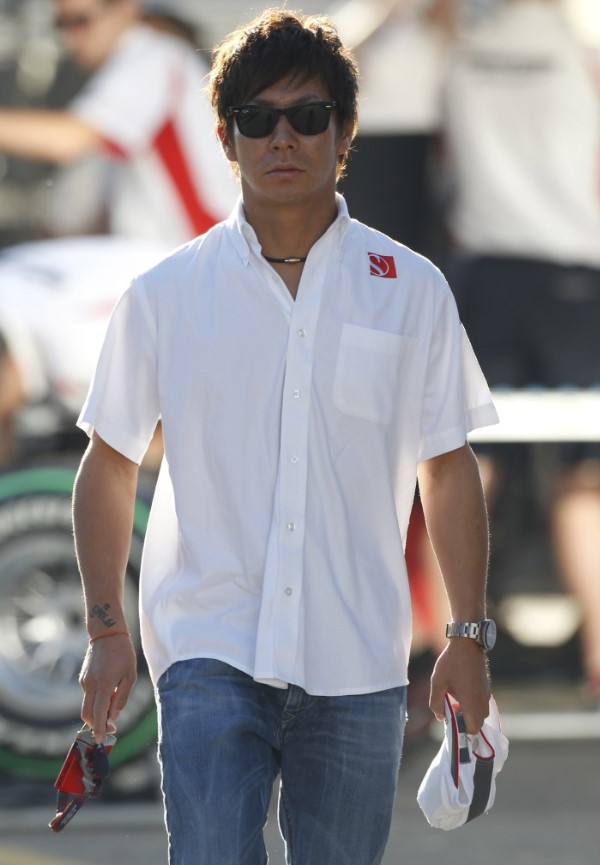 Kobayashi has no nuclear fears for Suzuka
(GMM) Kamui Kobayashi is the first formula one driver to announce he has no fears about travelling to his native country for October's Japanese grand prix.

Bernie Ecclestone and Masuru Unno, a spokesman for the Suzuka circuit, said at the Nurburgring that despite some MotoGP riders planning to boycott the Motegi race, Suzuka – hundreds of kilometers further from the Fukushima nuclear plant – is "completely safe".

Sauber driver Kobayashi insists he is not worried.

"I went there and I am fine," he said. "Nobody is worried in Japan. Going to Suzuka will show support for the people. I expect people to come from everywhere to Suzuka," he is quoted by Al Jazeera.

F1 chief executive Ecclestone, who announced he is personally buying 3,000 tickets to the race to give away, said he is confident no one in F1 will follow the MotoGP example and announce they fear travelling to Japan.

"I do not know why motorcycle riders are reacting like they are," he is quoted as saying by the journalist Agnes Carlier. "Here in F1, no one thinks that there is a problem."

Rain in Hungary as F1 circus moves on
(GMM) After a cold and damp week at the Nurburgring, some of F1's travelling circus are already reporting rain in Hungary.

British commentator and former driver Martin Brundle travelled straight from Sunday's German grand prix to the Hungarian capital, scene of the eleventh round of the world championship at the Hungaroring this weekend.

"Pouring with rain," he wrote on his Twitter channel. "Looks set to stay that way until mid week."

International weather reports say the outlook for the weekend is indeed better, but with a continuing risk of rain and the absence of Hungary's usually scorching conditions.

"It is raining a lot here and it's not so warm!" Team Lotus' Brazilian test driver Luiz Razia said.

Talks 'on' to alternate Spanish venues – Ecclestone
(GMM) Bernie Ecclestone has admitted the possibility that Barcelona could lose the Spanish grand prix.

Circuit de Catalunya officials recently rubbished reports that F1's other Spanish host, Valencia, had proposed to replace Barcelona on the calendar from 2012.

"Two weeks ago it looked like Barcelona was not going to have the race any more, and not just next year," F1 chief executive Ecclestone told Spain's TV3 television before departing the Nurburgring.

He then admitted the possibility that Barcelona and Valencia might from now on annually alternate the running of a single Spanish grand prix.

Ecclestone, 80, also said Spa-Francorchamps and France might similarly alternate the hosting rights to a single annual calendar slot in the future.

"The negotiations to alternate Barcelona and Valencia are still on," he is quoted as saying by EFE news agency.

The Brazilian veteran recently admitted he has not yet been offered an extended contract by the famous British team.

He then arrived at the Nurburgring announcing that talks about 2012 with Williams chiefs should be "straightforward", after bosses Sir Frank Williams and Adam Parr both indicated a deal is likely.

But long-time Blick correspondent Roger Benoit revealed that he asked team principal Williams inside the Nurburgring's Dorint hotel if the team will line up next year with Barrichello still alongside Pastor Maldonado.

The wheelchair-bound 69-year-old then suggested that it is not the well-backed Venezuelan rookie Maldonado whose seat is in doubt.

"Many people believed we only have him because of the money. But he (Maldonado) is also super-fast, straightforward and the team loves him.

"With a Renault engine, we can give him a better car in 2012," added Williams.

Nurburgring talks with Ecclestone 'positive'
(GMM) Talks on Sunday about the future of the Nurburgring on the F1 calendar were "positive".

That is the claim of Kurt Beck, who attended the German grand prix amid reports his Rhineland-Palatinate state government is no longer willing to financially back the famous circuit's formula one race.

"The talks with Mr. (Bernie) Ecclestone have been very positive," the minister-president told Bild newspaper. "I think German fans will see more formula one races at the Nurburgring in the future."

Bild says the meeting with the F1 chief executive lasted more than half an hour.

"If it was up to me, I would have a ten year contract," Briton Ecclestone said. "I have made them a fair proposal.

"I don't think this is the last race. We found a solution to stay at Hockenheim," he added.

It has been suggested that Karl Josef Schmidt, who negotiated the Hockenheim solution, wants the same deal for the Nurburgring, where the circuit pays a lower sanctioning fee but shares its ticket receipts with F1.

"I believe we will somehow find a way to agree to politically and economically viable conditions," he is quoted by the SID news agency.

FIA president Jean Todt recently denounced the current total ban as "stupid", preceding a meeting of the teams alliance FOTA at the Nurburgring at the weekend.

France's autohebdo.fr reports that the proposal to emerge from the meeting is for a single three-day test before next year's European race season, to probably take place at Mugello.

The report said the test could be in addition to a third practice session at European grands prix in 2012.

Germany's Auto Motor und Sport added that, to assuage the reluctance of some smaller-budget teams, the in-season Mugello test would be in lieu of three days of the pre-season winter schedule.

The report said the date of the test, which cannot be finalized now because the 2012 calendar remains provisional, would be during a three-week break prior to the first European race.

It is also believed that teams will not be forced to run young drivers at Mugello.

"There are pros and cons of testing during the season," FOTA chairman and McLaren team boss Martin Whitmarsh is quoted as saying by Auto Motor und Sport.

No 'emergency meetings' after Nurburgring – Horner
(GMM) Boss Christian Horner insists there will be no "emergency meetings" or "panicking" after Sunday's second consecutive failure by a Red Bull driver to win the grand prix.

The team boss was speaking after Mark Webber, third, and championship leader Sebastian Vettel, fourth at the Nurburgring, called on the team to up its game after losing first to Ferrari at Silverstone and then McLaren's Lewis Hamilton on Sunday.

"Yes, we can push forward the development program but we are not panicking because of two races without a win," Horner is quoted by O Estado de S.Paulo.

Der Spiegal correspondent Ralf Bach said Horner "smiled" when he heard the word 'crisis' in the wake of the German result.

"After ten of the 19 races, Sebastian leads with 77 points over Mark. He (Vettel) could go on holiday for three races and still be ahead," said the Briton.

Indeed, Vettel's closest non-Red Bull challenger is Hamilton, while Ferrari's Fernando Alonso is 86 points behind with nine races to go.

"It would be presumptuous to believe in the title," the Spaniard said. "I prefer to concentrate on every single race."

Hamilton's McLaren teammate Jenson Button is 107 points behind, and after another technical retirement said on Sunday: "I don't think we're fighting for the championship anymore."

Hamilton agreed that the fight will be "very, very, very hard", while Alonso vowed to keep the pressure on.

"For sure it's not as easy for them (Red Bull) as when they were one second in front of everyone.

"When you are only a couple of tenths ahead, it's not the same confidence any more and there is a possibility for mistakes," he said.

German pundit Hans-Joachim Stuck thinks the "week-long" pressure of his home race got to Vettel, who was uncharacteristically off the front row and podium at the Nurburgring.

And David Coulthard told the Telegraph: "The jury is still out on his racing in traffic."