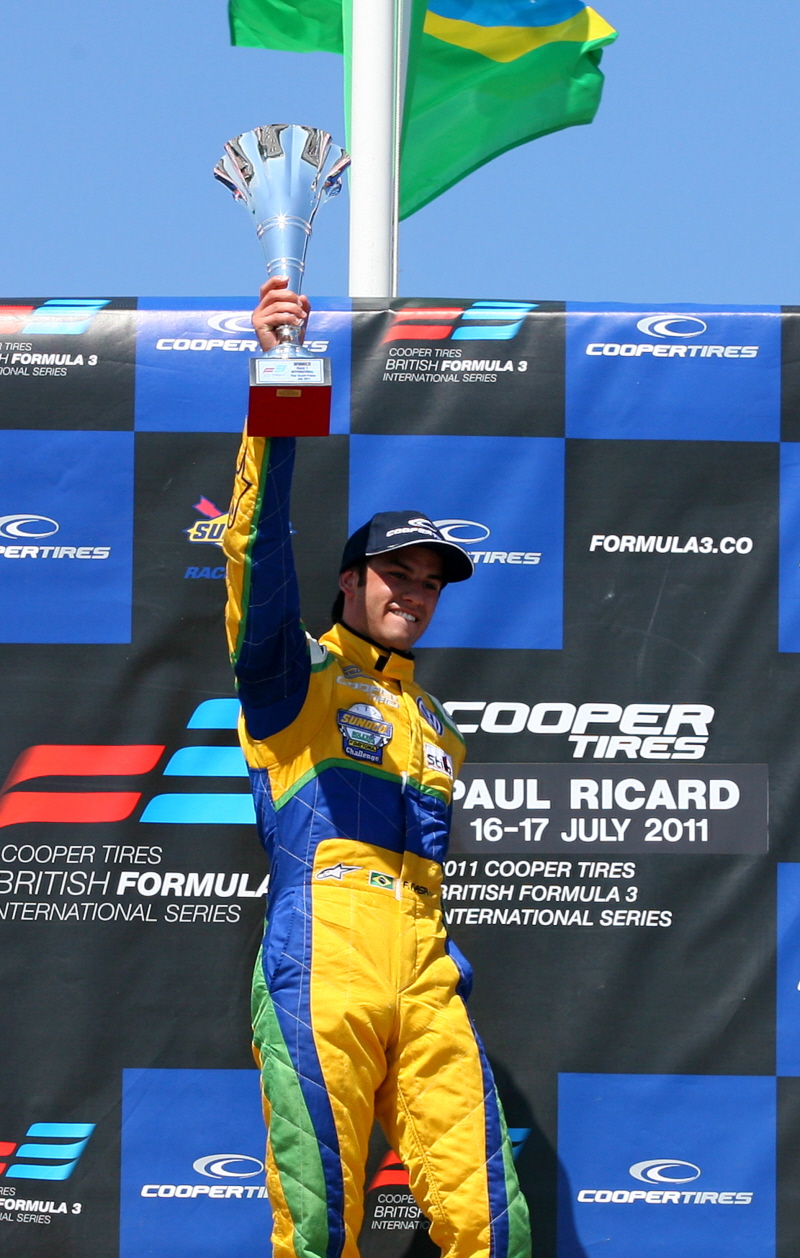 Carlin man Nasr leaves France with a much enhanced points lead as a result of his efforts. Meanwhile his team-mate Kevin Magnussen, who was odds-on for the race three win only to lose it within sight of the checkered flag, goes home disappointed yet again.

Round 17
Will Buller made it to the top step of the Cooper Tires British Formula 3 International Series race podium this morning at Paul Ricard, the Ulsterman breaking his duck with a commanding drive for the Fortec-Mercedes team from pole position to the fall of the checkered flag.

Eighteen-year-old Buller, who is in his second British F3 season, was gifted the pole for the ‘reverse-grid’ sprint race when his first-race finishing position, seven, was pulled in the random draw. Will did not waste the opportunity and had to make not one, but two good starts to underline his class.

The first start was an abortive affair with the lights flashing amber after the reds were extinguished; some drivers took this is a cue to start, others were more hesitant. Inevitably there was contact in the pack, with the two Double R cars of Pipo Derani and Scott Pye in collision and Bart Hylkema’s T-Sport machine striking the rear of a slower starter. The race was abandoned and a six-lap restart ordered; none of the three damaged Dallaras was able to go.

Buller did it all perfectly once again when the lights this time worked as anticipated and built a first-lap lead of half a second over Carlin’s Rupert Svendsen-Cook, with Saturday podium man Antonio Felix da Costa slotting into third for Hitech ahead of Carlin boys Kevin Magnussen and Carlos Huertas on the opening lap.

And that’s how the top five stayed for the duration of the truncated race, with Buller able to double his lead by the fourth lap and to pull out a 1.6s advantage over Svendsen-Cook by the finish line.

“It’s so good to get the first one," said a victorious Buller. “I’ve waited so long. I’ve been fast but things just haven’t gone our way. Finally I have it and I’m so happy about it; it’s good to be on that top step and I plan to continue from here. The second start was very good for me; I pulled away and it was all good from then on."

“I had a great start," said Rupert, “but Will did also and I couldn’t get him into the first corner. I was really pushing him for the first three laps but after that I couldn’t follow so closely. Will then pulled out a bigger gap, I think because he had fresher tires. But it’s my third podium from three weekends, so all in all it’s good."

The battle for sixth was a highlight of the race, with Fortec’s Lucas Foresti holding it for the opening three laps until Racing Steps Foundation driver Jack Harvey seized it from him. Harvey had lost several places on the opening lap and was on lap two at the centre of a further incident. As Harry Tincknell attempted to pass him, Harvey was hit by the pursuing Pietro Fantin and the Brazilian was bounced back into Tincknell which knocked Harry into a spin. Fantin recovered to deliver late-race pressure on Foresti, but Lucas retained seventh at the line.

Felipe Nasr slipped from seventh to 10th on the second lap after a spin, but the championship leader relieved Sino Vision’s Hywel Lloyd of ninth with an aggressive fourth-lap move. Jazeman Jaafar, who along with Menasheh Idafar was relegated to the back of the grid for driving standards infringements in race one, battled through to claim 10th, and the final point, from Lloyd two laps from the end. Hitech’s Kotaro Sakurai enjoyed an untroubled and uncontested run to victory in the Rookie class.

*Post-race, Felipe Nasr was handed a 30-second penalty for not respecting track limits while overtaking, dropping him to 16th and promoting Jaafar to ninth, Lloyd to 10th

Round 18
Nasr was as surprised as anyone to be first past the checkered flag in Round 18 of the Cooper Tires British Formula 3 International Series at Paul Ricard this afternoon, for his Carlin team-mate Magnussen looked to have the race victory in the bag.

Magnussen led the race all the way from pole position to the final corner, only to crash out within sight of the finish line after a clash of cars with the hotly pursuing Antonio Felix da Costa. It was another miserable end to a race weekend for the Dane, who was robbed of a near-certain third-race victory in Germany a fortnight ago.

Nasr had already tried everything he knew to get past Magnussen; the Brazilian shadowed him closely all the way to the 10th lap – too closely, in fact, as Felipe’s front wing touched Kevin’s rear at Beausset as he tried to find a way past. Slightly delayed by the bump, Nasr fell prey to da Costa’s Hitech machine on the next lap and lost second spot to him.

The top three circulated as one for several more laps, with Nasr trying everything possible on lap 15 to wrest second back from da Costa. Felipe nosed ahead for a corner but the Portuguese driver was in no mood to concede. This tussle gave Magnussen the opportunity to pull a second clear, but da Costa was right back on the leader’s tail for the final lap.

Da Costa’s view of the Virage du Pont clash with Magnussen was this: “Kevin was much slower than me, and I was going to go for it. My view is that he decided too late not to let me past, or maybe he didn’t see me. I don’t like to be in this situation; I like Kevin a lot." Da Costa survived the brush to cross the finish line second on the road, a second and a half behind Nasr. Race stewards later docked him a 30-second penalty for the incident, dropping him to ninth.

“It was quite a gift for me," said Felipe. “I knew that those guys were trying too hard. I had the chance earlier on to get Kevin, but I know that Kevin has nothing to lose right now; he’s too far back in the championship. He was really aggressive with me and I think went too far, defending too much. I just kept my car clean after that and drove the whole race waiting for a moment to come. It happened in the last corner and I got the win, which is good for me."

Ricard race two victor Will Buller made an excellent start from eighth on the grid to shoot up to fourth on the opening lap, and he stayed ahead of the pursuing Jack Harvey for the duration to collect what became third with Magnussen’s demise and second with da Costa’s penalty. Buller’s efforts were rewarded with the Sunoco Driver of the Weekend award.

The race was marred by a first-turn shunt between Jazeman Jaafar and Pietro Fantin which led to several clashes and spins in the pack and a five-lap safety car period. Jaafar, Fantin, Scott Pye and Harry Tincknell all retired with damaged cars, and Bart Hylkema was forced to the pits for brief repairs before continuing.

Carlin men Rupert Svendsen-Cook and Carlos Huertas followed their team-mate Harvey home, with Fahmi Ilyas next up for Fortec to collect his best placing of the year and his first championship points. Hywel Lloyd was classified seventh for Sino Vision Racing, ahead of International class debutant Hylkema (T-Sport) and Double R’s Pipo Derani.

Kotaro Sakurai placed 11th on the road for his third Rookie class win of the weekend, ahead of T-Sport’s Menasheh Idafar, who was delayed by a clash with the car of Lucas Foresti which led to the Brazilian’s 12th lap retirement.

British Formula 3, which next heads for the Belgian Grand Prix circuit of Spa-Francorchamps on its European mini-tour, enjoys the headlining support of Cooper Tires and is additionally backed by Sunoco Racing Fuels, Anglo American Oil Company and OAMPS.